A Lone Coconut in Cambodia

23 December, 2013By DaniellePosted in Cambodia

I remember when I met a solo female traveler for the first time while I was in Nicaragua a few years back.  I was blown away — I literally thought this girl was the coolest.  Since then I have met countless solo female travelers, and have admired them all.  But me?  Still too scared.  What if I didn’t meet anyone?  What if I felt intimidated and worried all of the time?  What if, what if, WHAT IF?!

But, apparently it was time for me to learn.  Silvia had done more of Southeast Asia in the past and was ready to return to Chiang Mai, and Sasha, who was supposed to join me, ended up flying back to the States early after the whole Chinese visa debacle.  And thus, Cambodia marked my foray into the world of solo travel.

So, what’s a lone coconut to do in Cambodia (besides fall very behind on blogging- whoops)?

I started in the bustling capitol, Phnom Penh, where I woke up every morning and prayed I wouldn’t get run over by a motorbike.  Seriously, the traffic there made the streets of Ho Chi Minh look tame in comparison.  Most people breeze through PP, but I was stuck there until my debit card arrived via FedEx– remember the whole purse snatching in Vietnam thing?  Yeah.   So I settled in at Nomad’s Hostel, which was the perfect base for me to explore the city.   So what did I do?  Naturally I spent a lot of time eating. Being located between culinary superstars Vietnam and Thailand, Cambodian food often gets overlooked.  That doesn’t mean it isn’t totally delicious.  Because it is. 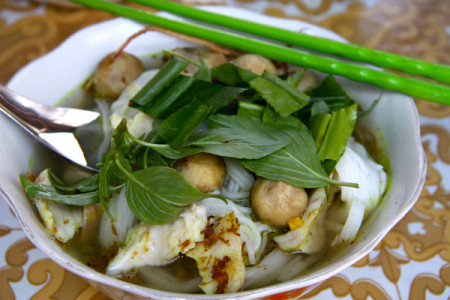 And if you tire of all of the soups, curries, fresh fish etc. you can try grilled snake (chewy), spiced oxen penis (also chewy) or fried tarantulas! (Luckily beer is incredibly cheap in Cambodia because trust me, you need a glass or seven to wash some of those dishes down.) 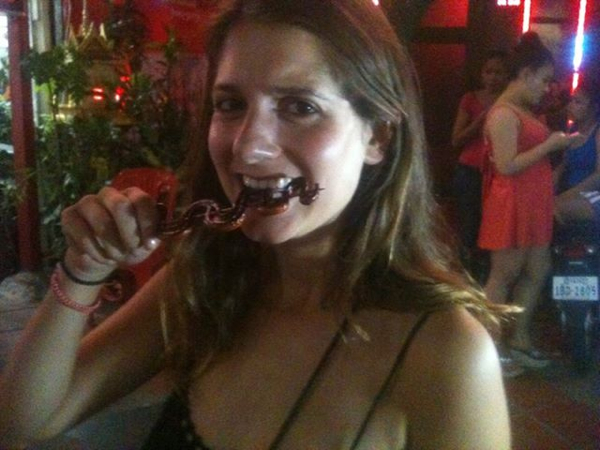 When I wasn’t stuffing my face I took some time to learn about Cambodia’s brutal history.  My first stop was the Tuol Sleng Genocide Museum.  Originally built as a high school, the complex was turned into a prison during the Khmer Rouge’s reign of terror.  I don’t usually do guides because I’m a cheapie, but at Tuol Sleng it is inexpensive and well worth it.  Our guide’s mother grew up during the Khmer Rouge years, and she was able to offer us an inside perspective.  [box] Who were the Khmer Rouge? The Khmer Rouge, led by the ruthless Pol Pot, ruled (and destroyed) Cambodia from 1975-1979. Radical communists, they sought a classless, agrarian society, and in the process of doing so murdered nearly two million people. Anybody suspected of being educated and professional was killed along with their entire family. [/box]

As if that weren’t a sobering enough experience on its own, I then headed to the infamous the Choeung Ek Killing Fields, where for $6, I got a very informative audio guide.   The natural beauty of the area offers a chilling contrast to atrocities that took place there. Boxes of bones, skulls and shards of clothing are displayed throughout, with more constantly being unearthed after heavy rains.  It’s a completely emotionally draining experience, though one that I would not recommend missing, especially if you want to better understand Cambodia’s present condition.

After a few days in PP I was getting sick of dodging traffic and wanting to see some of the lush Cambodian countryside.  Luckily, I met someone else who was hoping to do the same and together we rented a motorbike and set out for Oudong, the ancient capital city.  And by together I mean I sat on the back, because after ten months in Asia I still didn’t drive. 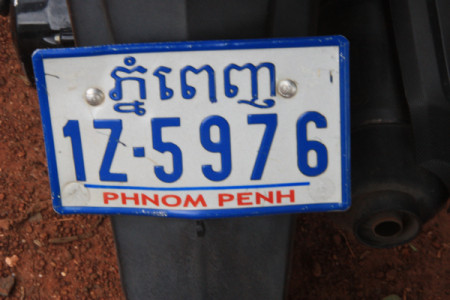 The ride takes about 45 minutes and the scenery is ah-mazing (once you make it out of the awful traffic, driving in PP is not for the faint of heart).  We drove down random streets all day, admiring the serenity that lay only an hour outside of the crazy city.  For lunch we snacked on my new favorite street food, banana wrapped in coconut sticky rice wrapped in a banana leaf and grilled.  Delicious!

Then we came across a heavily guarded UN compound.  Naturally we wanted to check it out.  Shockingly,  they didn’t want to let two random American girls in, but one of the peacekeepers escorted us to a beautiful stupa with stunning views.  So beautiful, the highlight of the day by far. 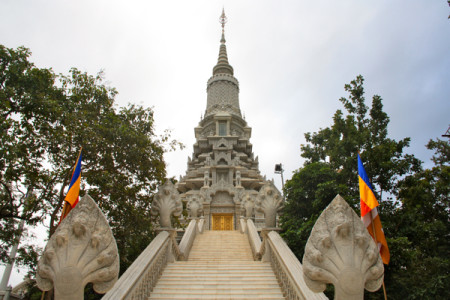 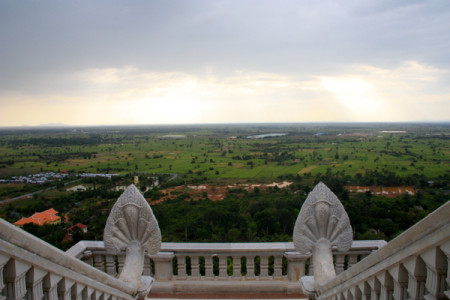 After five days of waiting, at last I had my debit card in hand!  I immediately set out for Kampot, home of some of the world’s best pepper, to meet up with some friends from Nomad’s.  A quaint riverside city, travelers are drawn to Kampot for its relaxed atmosphere and the nearby Bokor National Park.  It’s one of those places that people go to for a day or two but end up staying for a couple weeks. Warning: it could happen to you to, especially if you stay (or just party) at the highly recommended Bodhi Villa.

After Kampot I headed to the island of Koh Rong for some much needed beach time.  Koh Rong is another place that backpackers wouldn’t stop talking about and it was easy to see why.  Just as beautiful as Thailand’s famed islands, Koh Rong hasn’t been developed….yet (you better go soon though).  There’s nothing to do besides chill on the beach, eat cheap food, drink beer, and there are plenty of places selling pre-rolled joints for those who indulge.  You know how I said people stop in Kampot and end up staying for a few weeks?  Koh Rong is one of those places that people end up staying for a few months.  One side of the island has a strip of guesthouses, bungalows and restaurants.  Don’t expect anything too fancy, I shared my room with a family of rats.  Gross right?  But after five months of backpacking… I have no standards, and prayed my mosquito net would keep them away.  The other side of the island is nearly untouched.  You can get there by boat or you can trek through the jungle.  Let me warn you: it is not an easy trek, DO NOT wear flip flops.  I literally could not walk properly for four days afterwards, though I’m not sure if that’s a testament to the difficulty of the trail or how physically fit I’m not. 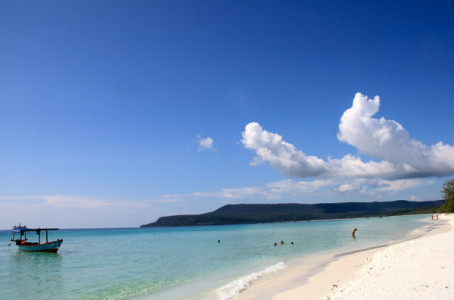 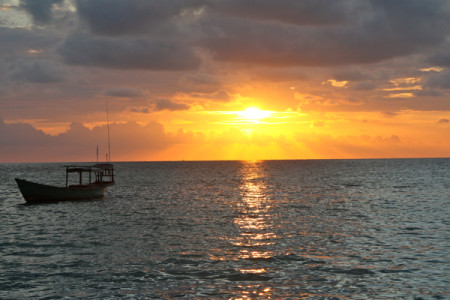 Then it was time for Siem Reap and the Famed temples of Angkor!  To be honest I wasn’t very excited.  After ten months in Asia I was templed out.  And ancient ruins?  They just don’t get me going, especially when they are crawling with Westerners.  But obviously I had to go, I was there.  So, a few friends and I set out at sunrise, because that’s when Lonely Planet said we should go to “beat the crowds.”   Wrong again, LP (I’m a Wikitravel girl all the way).  What we were hoping to see: 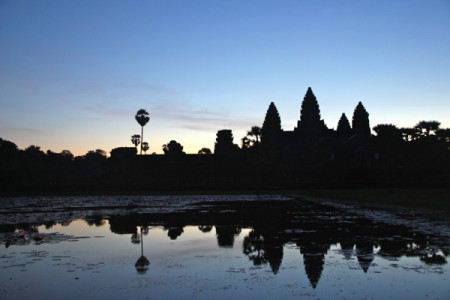 What we actually saw: 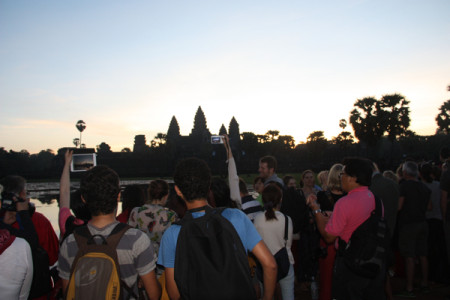 Ok, some of what we saw was actually pretty beautiful, especially the trees that are taking over Ta Prohm (the one where Tomb Raider was filmed).  One word of advice: don’t get a tour guide.  It’s just not worth it. 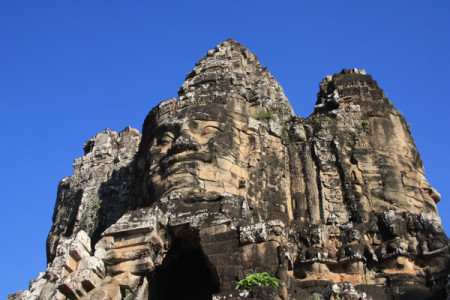 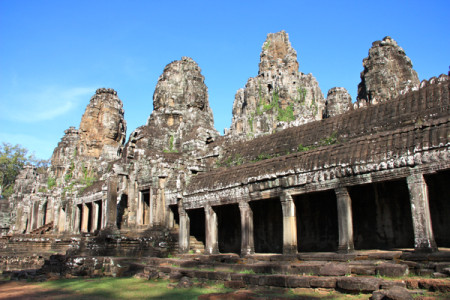 I think that Siem Reap in itself is a weird city and I much preferred PP, though I think most backpackers would disagree with me.  Naturally it’s completely tourist-oriented.  Lots of good Western restaurants, shopping and of course we can’t forget Pub Street.  I won’t lie, I a got a few massages, bought some souvenirs and even splurged on Italian food to celebrate Thanksgiving.  But there was just something disturbing about all of the well-heeled tourists eating and drinking at expensive places, completely oblivious to the barefoot street children outside sorting through the trash of those same bars and restaurants.

Aaaaaand the verdict on solo travel is:

I like it!  I made friends!  I didn’t die!   Yes, friends reading this, I know you’re rolling your eyes and thinking “I told you so.”  You were right!  I would say it’s like 80/20.  Solo travel is great because you get to meet so many people and actually form relationships and maybe even become travel buddies for a few days or weeks.  When I was traveling with Silvia and Sasha we still met tons of people, but it was just different, we had each other.  Traveling alone was also liberating.  I didn’t have to get two other people on board every time I wanted to do something.  If I didn’t like what people were doing, I could just leave.  On the other hand, I obviously missed my fellow coconut.  First of all, it was way easier to blog with Silvia around to provide motivation(!!!).  But also, it’s really nice to share these types of experiences with someone you’re close with and that you can reminisce with in the future.

Anyways, it’s a good thing I liked solo travel because I have four more months of it come February!

10 thoughts on “A Lone Coconut in Cambodia”