17 August, 2013By DaniellePosted in China

Oh Beijing.  Where to even begin.  We’ve become so well acquainted.  I’ve almost gotten used to your more shocking aspects: the smog, the men in their summer uniform of no shirts aka the “Beijing Bikini” and the babies whose bottoms are never covered, because why waste money on diapers when there are so many sidewalks and sewer grates open for use!  I’m still in awe of the insane amount of new Audis, BMWs and Mercedes that clog your streets (did you know there are 300,000 millionaires in the city??).  I’ve even become an expert at navigating your subway system.  Whether I can credit that to an improving sense of direction or really good city planning is unclear.

What was supposed to be a quick, four-day stop on our way to Mongolia became a very extended 17-day stay while Silvia recovered from a respiratory infection.  Lucky for me, upon our arrival here we were joined by my friend Sasha, who will be traveling with us for the next few months.  While Silvia was stuck in bed forcing down rehydration salts, we attempted to stop at all of the must-see attractions.  But let me tell you, Beijing is SWELTERING.  I used to be one of those annoying people who would be like, “I never sweat, not even when I work out” (I mean I have a 10-minute workout max, but still).  Here, it was a totally different story – the insane temperatures combined with the insane humidity and the insane smog meant that I was always a hot mess. Literally.

Anyways, the tourist attractions.  I’m much more of a doer than a see-er but there are just certain things you can’t miss.  We stopped at Tianamen, decided not to enter the Forbidden City and swung by the Great Wall. 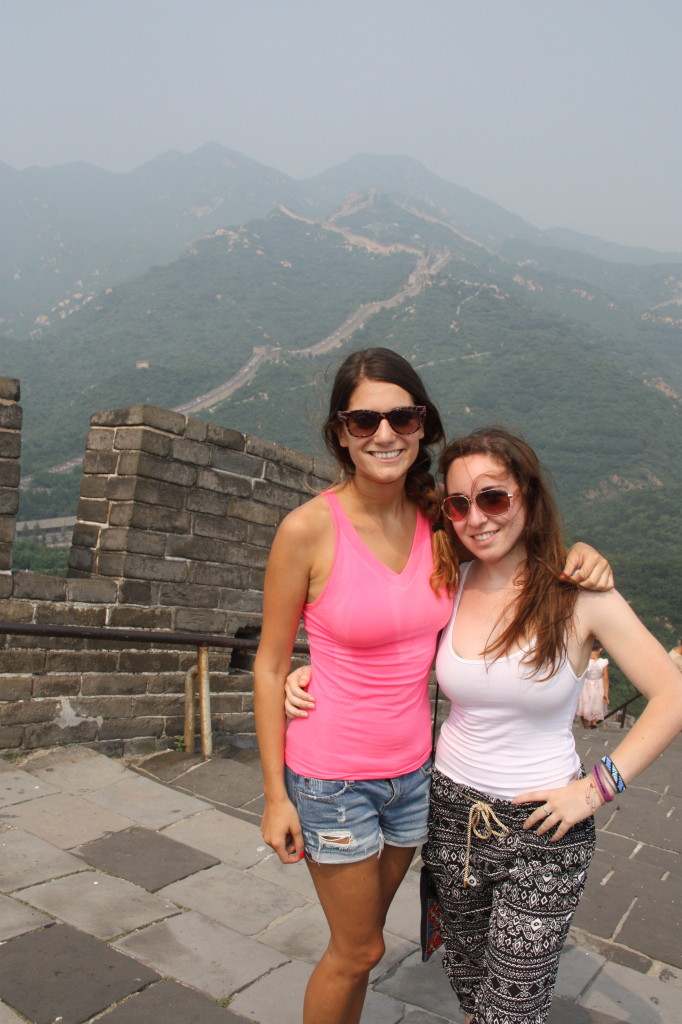 We walked through Donghuamen Market and admired (and cringed) at the fare for sale – skewered bugs still writhing as they waited for the deep fryer, snake kebabs and bowls laden with tripe. As much as we wanted to indulge,  the market was tourist centered and everything was a bit out of our price range.

We did however, splurge for Peking duck.  So amazing, I could eat crispy duck skin for hours.

We tried out some traditional Chinese medicine and got our backs cupped, which was really uncomfortable.  I’m not sure I’m feeling any of the desired effects but I have these really sexy marks  now. 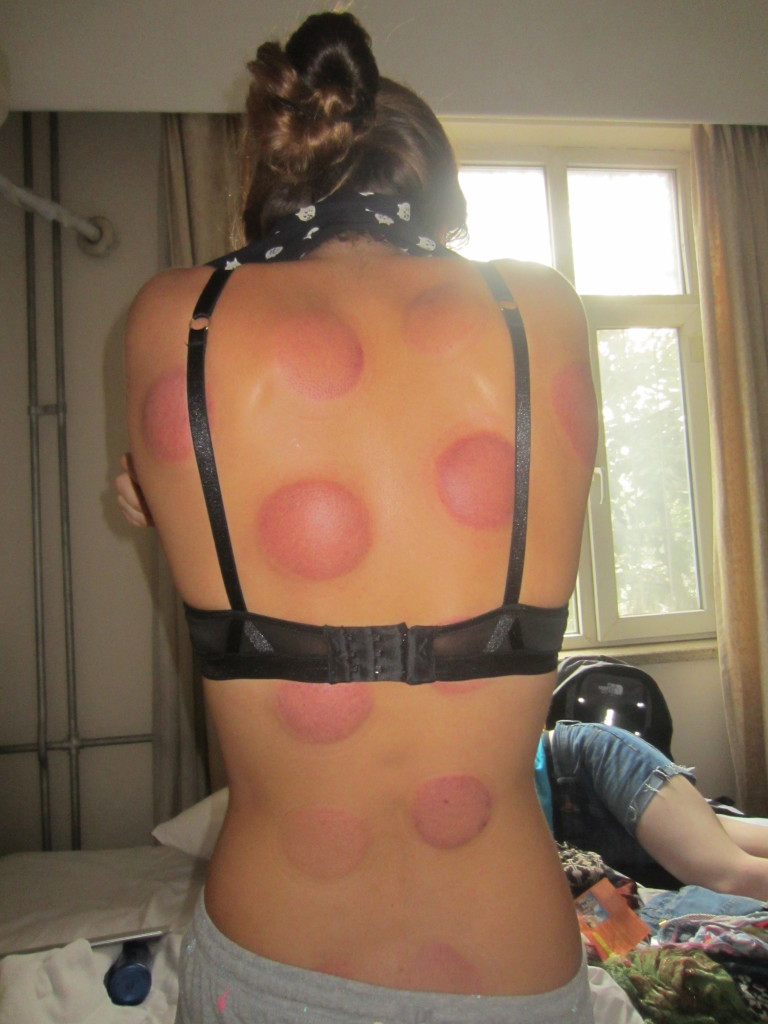 We also visited the Parkview Green, a futuristic eco-friendly mall with so much modern art on display, which itself makes it worth the visit.  Make sure you check out the 10th floor exhibit.

We spent hours upon hours at the Yashow and Silk Road Markets — both famous for their fake merchandise.  Not tacky fake like China Town Louis Vuittons but really nice fake, like so nice you start to convince yourself that things might actually be real.  Don’t do that.  There are floors upon floors of everything from Converse shoes to Northface backpacks to Marc Jacobs dresses to OPI nail polish to Canon cameras and so, so much more.  Bargaining is like a sport for me, and I love shopping so I was in heaven. But even the most hardcore bargainer can get overwhelmed after too many hours wandering the maze of stalls.  Like how I somehow ended up with a wool/leather jacket that I have to carry around for the next four months and kind of already hate.

While all of that was fun, the best part of our trip was just hanging out.  We ended up staying at the same hostel for 12 nights (because Silvia was sick).  Which is a really really long time.  Like we almost reached the maximum stay.  Awkward.  But we met such amazing, interesting, and really weird people. 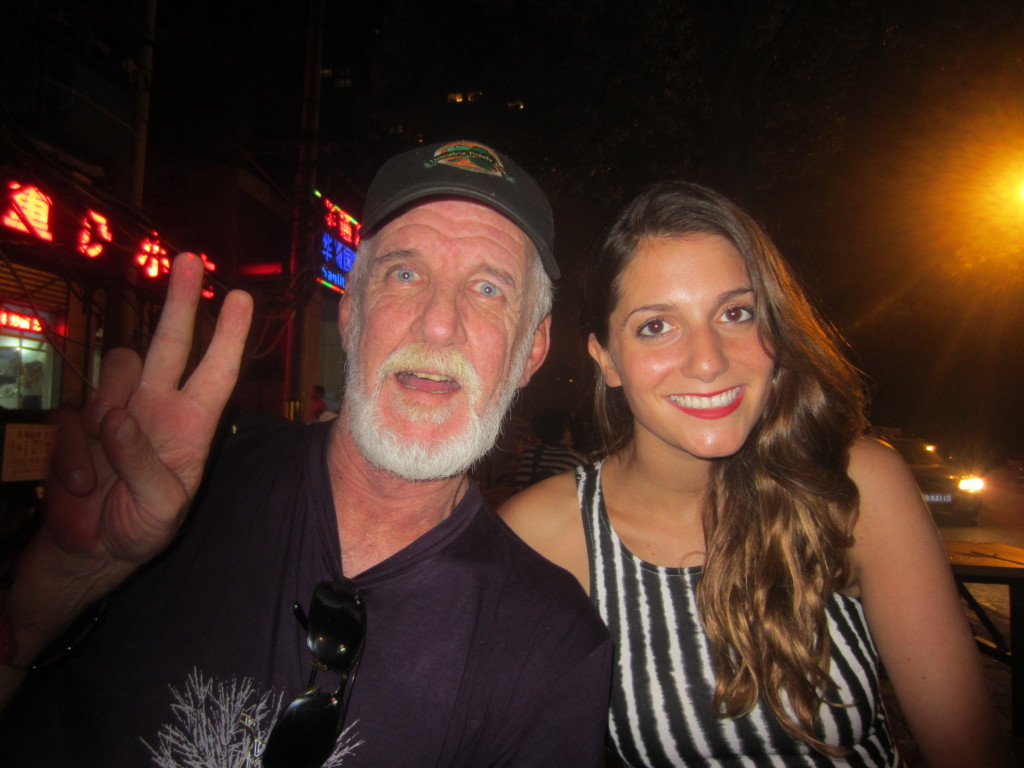 We became regulars at a nearby restaurant.  We found a store that sold CHEESE! We drank lots of weak local beer, stayed out until the early morning hours (Beijing has great nightlife) and slept in way more than we should have.  But that was ok.  We were in Beijing for so long that we were just able to relax and experience the city without the pressure of time constraints, which was a new and welcome luxury.  All in all, I was surprised that I really enjoyed China’s capital — but that might be because Silvia hates it and tried to poison my mind before we arrived.

And just to update you loyal blog readers on the progress of our trip:  on a whim we decided to reverse our entire itinerary.  So now our route is Kyrgyzstan>Tajikistan>Uzbekistan>Kazakhstan>Mongolia then back to China.  We spoke to a lot of people who had already been to those places and apparently Mongolia is overrated and Kyrgyzstan is really amazing, so we didn’t want to risk arriving in the latter when the weather was too cold.  We’re currently in Kashgar, which is basically the Middle East in China and we are leaving for the Kyrgyz border on Monday!