25 August, 2013By The Roaming CoconutsPosted in China

Ever wonder what it’s like to be on a train for more than a day?  Here are our thoughts….

Hour 2: (Silvia) With probably an unlimited number of standing tickets being sold, our train car is bursting with people. But so far it feels more lively than claustrophobic. Our neighbors helped us stow our bags and gave us bananas! And after the look of horror our hostel receptionist had given us when we told her we were only able to book hard seats for the thirty-four hour train ride, we were pleasantly surprised to find them at least a little soft. Though I guess we’ll see how we feel about them after thirty hours… 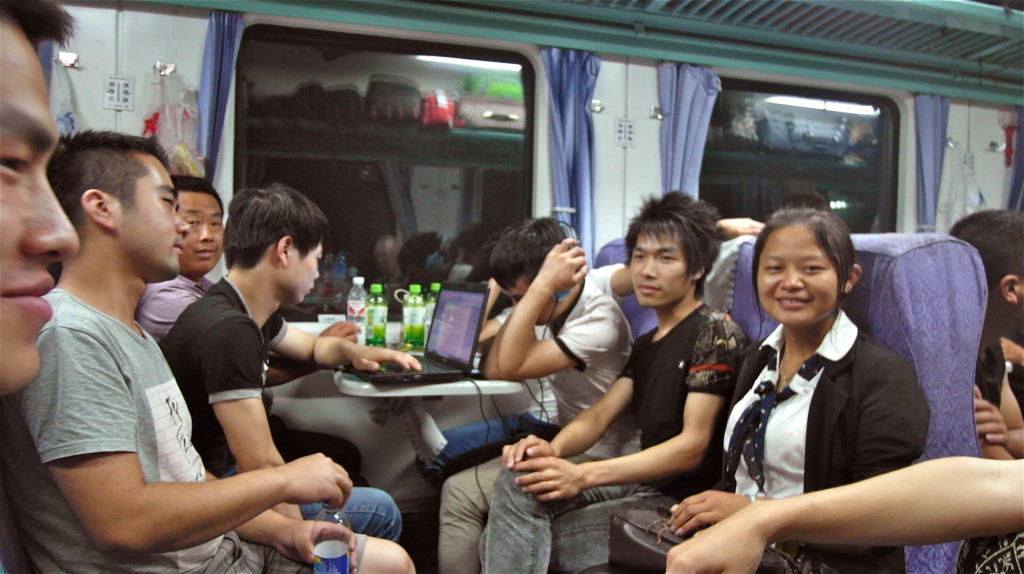 Hour 4: (S) Leaving Beijing we went through a tunnel and came out into stunning scenery. Just now we passed through a town both breathtaking and depressing. A surrounding of stony, moss-covered mountains, the landscape really is spectacular. But the town itself? A large nuclear plant and several towering concrete buildings alongside uniform rows of the same red brick house. I keep thinking Soviet, but I guess the word I’m looking for is Communist?

Hr. 8: (Danielle) I think the movie was a hit. Nobody speaks English but we’re becoming friends with our seatmates nonetheless. It’s 11:30 pm and the train car is still pretty lively, besides the guy passed out on the floor next to us. Every time the food cart comes by he has to move but won’t wake up and its a production. Oh, and most importantly, as we learned from a Chinese to English phone app. “It’s Valentine’s Day and lurve is in the air.”

Hr. 9: (D) The men behind us are hard at work translating on their phone. “Beauty, you are in that country?” 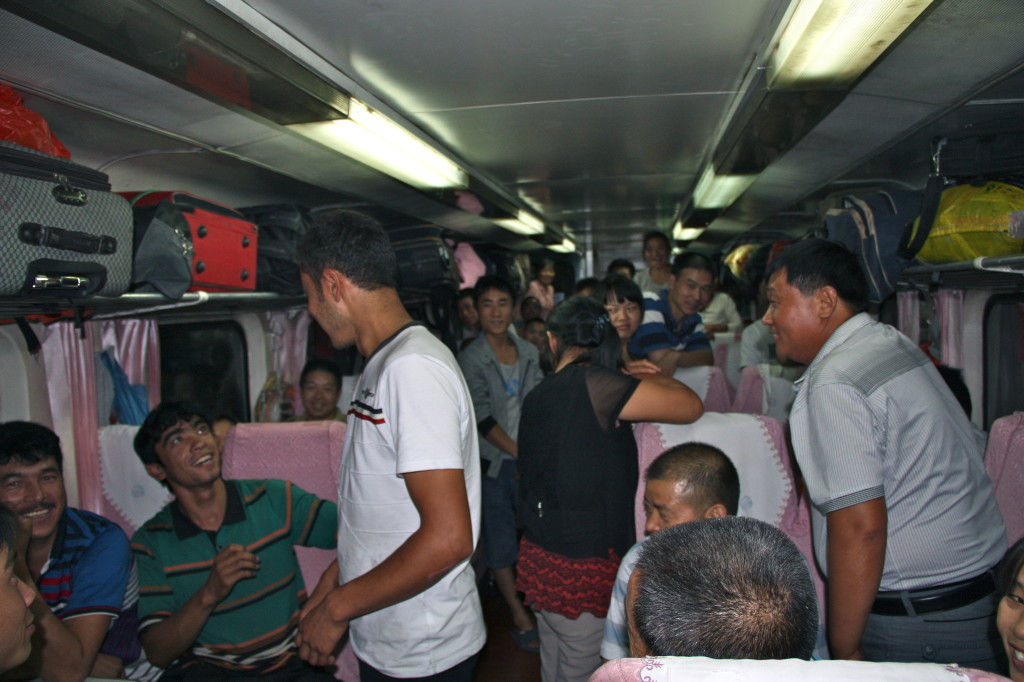 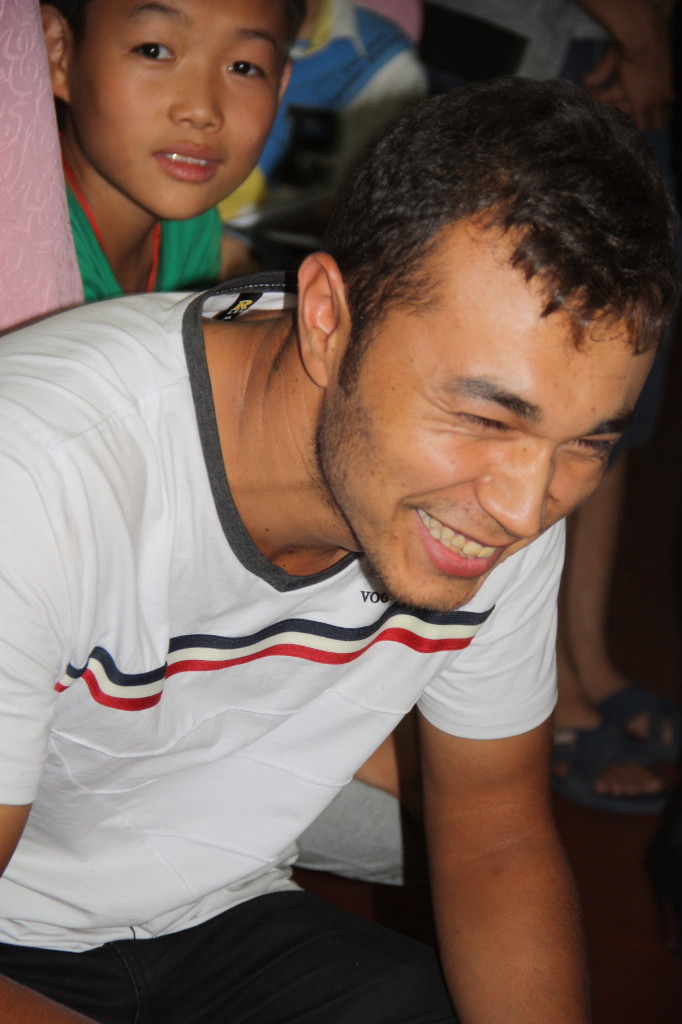 Hr. 16: (S) Slept. Sort of? Scratch what I said about these seats not being hard. The sun is back up though. Outside is so flat. So ugly.

Hr. 20: (S) It almost looks like desert outside with dry, cracking brown hills. It’s 11:30 am and Danielle is still asleep, and I am very jealous. No towns in sight, just endless fields of sand.

Hr. 23: (D) My feet are so swollen. What if I get a blood clot? Also, we just realized it’s a forty hour trip, not thirty-four. But what’s six more hours?

Hr. 28: (S) Danielle finally finished all her cheese! Our food supplies are dwindling, and the landscape continues to be gray and boring. But Sasha saw three camels! And she seems to be the first one of us to be losing it just a little (mirages much?).

Hr. 32: (D) The toilets in our car are out of order, meaning we have to push through the crowd of standing ticket passengers to the next car, where it’s a free for all. You have to fight your way in, even if it means pushing the kid that tried to cut you. You can’t let anyone by!

Hr. 33: (S) I kind of never want to leave the train now, it’s the weirdest. We’ve become like a happy family, working together to build a comfy home to sleep in. 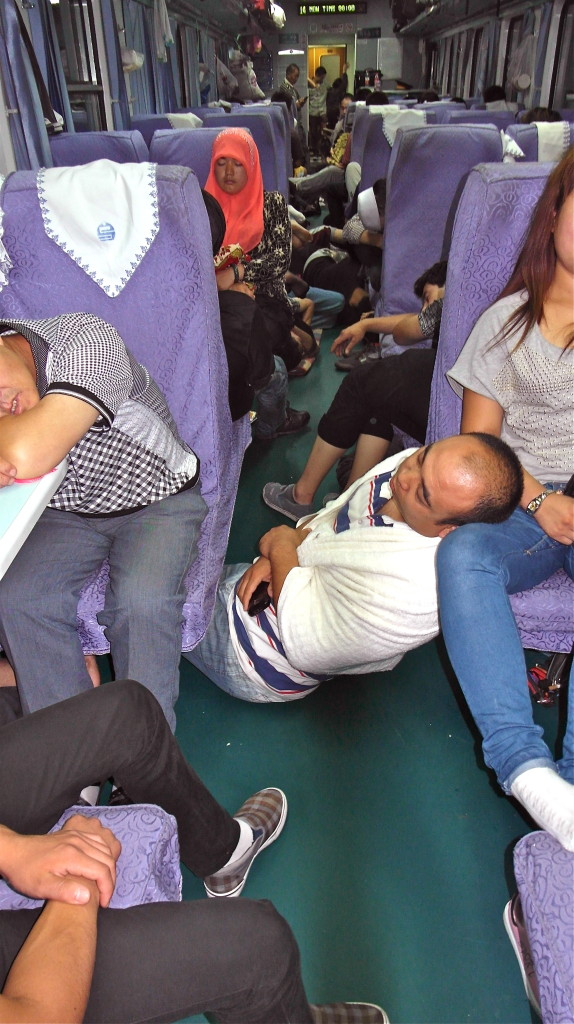 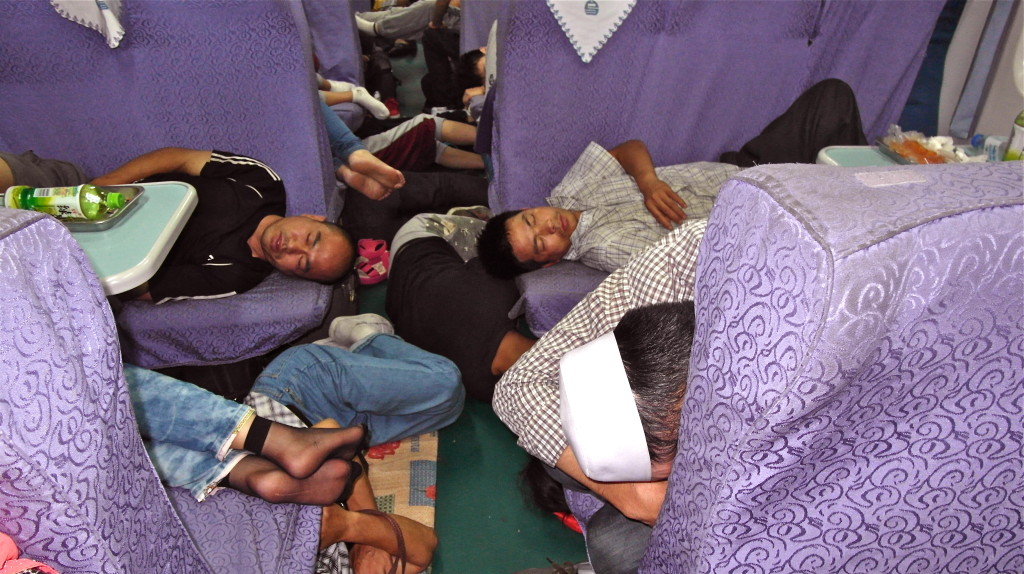 Hr. 48: (D) We finally arrived in Urumqi around 8:00 am. We were supposed to go to a hostel, but we decided to take another train leaving at 9:30 straight to Kashgar and get it over with. This train isn’t nearly as “nice” as the first one, but we only have twenty-five hours on it…

Hr. 49: (D) Entertaining our entire car by teaching them how to play the card game “War” (no English!). The scenery is stunning and dramatic– we’re driving past snow-capped mountains. It’s hard to believe we were in Beijing two days ago.

Hr. 56: (D) I think we’re finally going crazy. We’ve been playing with a four-year old for hours, got our hair french braided by a guy we met on our first train, had a dance party, and snuck into the 1st class toilets, pretending not to hear them yelling at us (such a relief to not have people banging on the door). Only ten more hours to go! 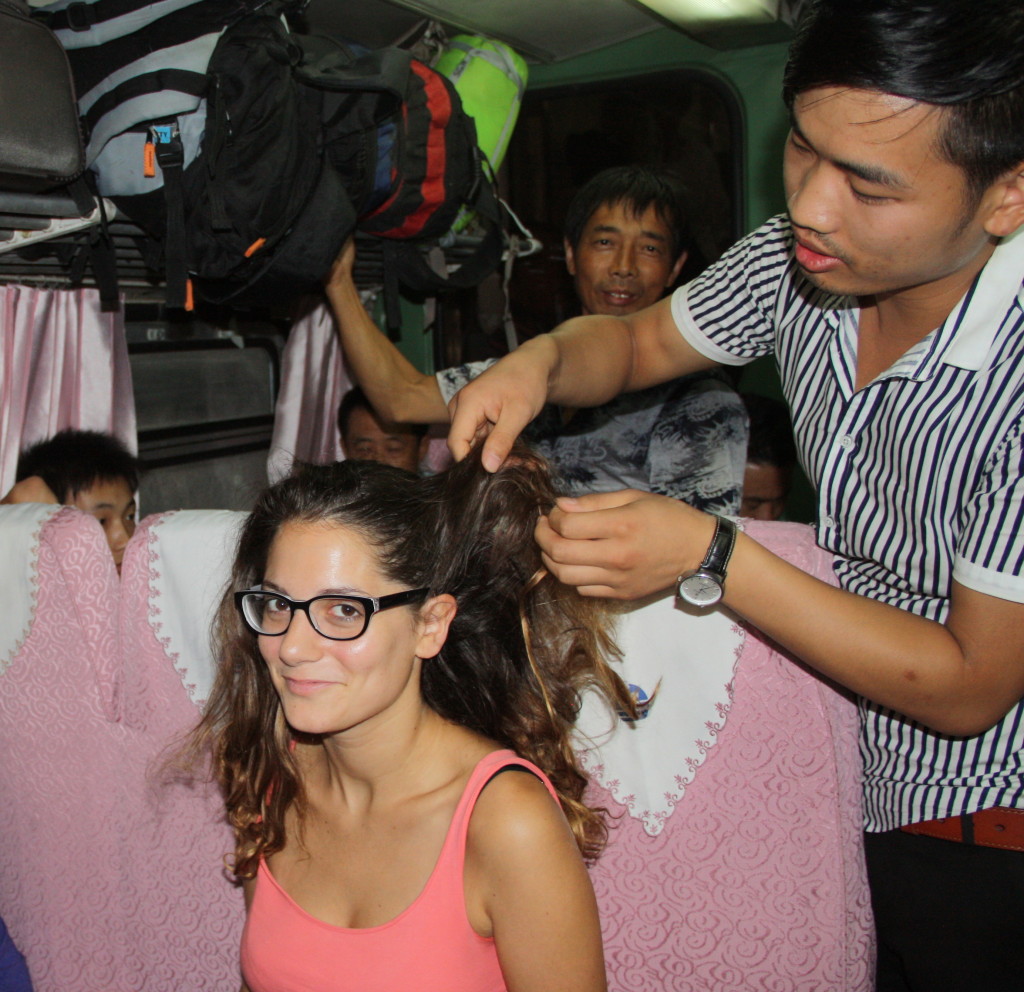 I’m a little worried about the seat situation, though. My seatmate is either repulsed or scared of me so he keeps disappearing, giving me the luxury of two seats to sleep — on and now somebody else is in them!

Hr. 58: (D) Finally found someone who speaks English– an ethnic Uyghur. He spoke a lot about his frustration with Chinese politics and the lack of opportunities for his people. If it weren’t for his family, he would try to move to Saudi Arabia or Germany. “Why Germany?” I asked.

Okay, time to change the subject.

Hr. 60: (S) Sasha and I just held a small, impromptu money auction. And when I say small you should know I’m totally being modest; all of the men in our car crowded around us to buy US dollars (and one random Hungarian note) from us. After they had depleted our supply, they continued to stare at us expectantly so we performed “The Itsy Bitsy Spider” for them. They quickly dispersed. Having reclaimed her double seat, Danielle of course slept peacefully through the whole ruckus.

Hr. 62: (S) I think Sasha and I might be getting the sleep-deprived crazies. The guys we’re sitting by woke up to find the two of us stuffing ourselves with naan bread and laughing hysterically at… the shape of Danielle’s hand? Danielle gave voice to their feelings towards us when she also briefly woke up to say, “You guys, you’re being really annoying.” Four more hours!

Hr. 70: (D) They lied about how long it took to get to Kashgar. We’re still on the train! Although I can’t really complain since I scared my seatmate away and was able to sleep a lot (sorry Silvia and Sasha). I also got to participate in this “money auction” when I finally woke up. It was kind of awks because the exchange rate is 6 RMB to 1 USD but I think they are under the impression that it should be 1to 1 and were ripping them off.

Also, there are so many hardcore starers. Like, I wake up and the guy in front of me is crouched on his seat looking down at me. Whatever. My rations are running dangerously low and eating is basically all there is to do on a train ride like this.  Help!

And lastly, the bottom of my bag is soaking wet from a mysterious liquid on the floor. Gross. 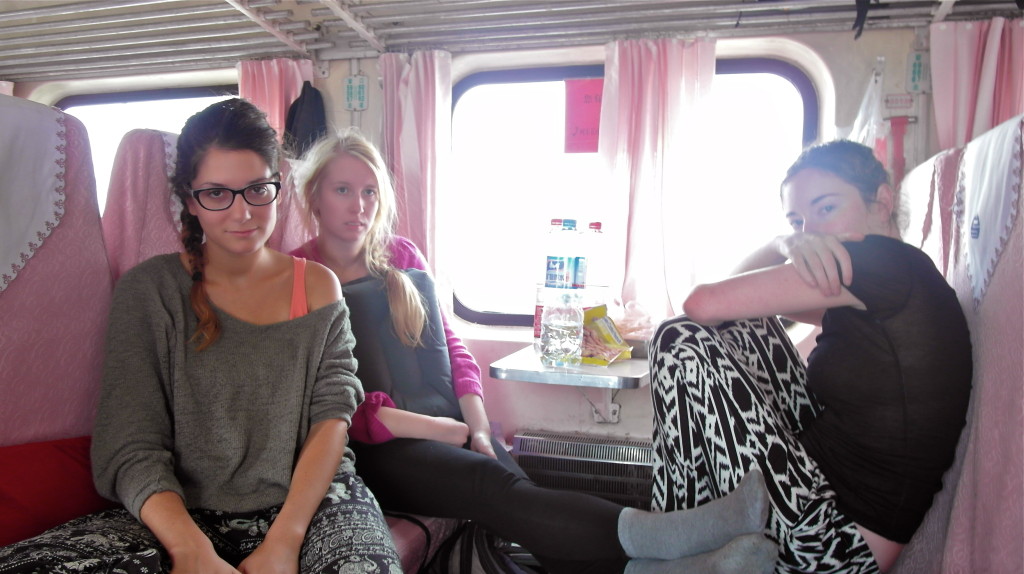 Hr. 72: (D) We finally arrived in Kashgar, exhausted and grumpy. We don’t have a hostel booked and nobody speaks English.

From Beijing to Urumqi we paid about $50 for hard seats. The first available tickets were for three days after we booked them, and sleeper tickets were sold out for longer, so it’s best to go to Beijing Railway Station to get tickets as far in advance as possible. We paid about $30 for hard seats from Urumqi to Kashgar, booking them just an hour before the train left.

6 thoughts on “72 Hours: Beijing to Kashgar”