Chillin’ in the Kingdom: A Day in Amman

27 April, 2014By DaniellePosted in Jordan

When I was impulsively scouring the web for tickets to Africa, I realized that they were about half the price if I were to leave from Amman, Jordan, as opposed to Tel Aviv, Israel, where I was starting my trip (about $500 vs. 1000 RT). Amman is roughly 65 miles from Tel Aviv and 45 from Jerusalem. A piece of cake, I thought, booked the ticket, and decided to figure it out once I got there. Wrong. Crossing into Jordan from Central Israel not only requires a visa in advance, but like five bus transfers through the West Bank. Or something. The thought alone was overwhelming, so I decided to make the five or so hour journey down to the southernmost point in Israel, Eilat, where there is a direct and visa- free border crossing. The free visa almost made up for the fact that I had to pay a THIRTY dollar departure tax to Israel.  I was dreading the trip — spending the day on a bus traveling all the way south just to go back up north didn’t appeal to me at all. Plus I had heard nothing good about Jordan, save for Petra and I plan on doing that in May. “The Hashemite Kingdom of Boredom,” people call it.  So five days in Jordan became four and then three and then two and then finally I couldn’t put it off any longer.[box]

Getting from Israel to Amman via the Eilat/Aqaba crossing:

1. Take an Egged bus to Eilat. This cost me $22 from a suburb of Tel Aviv. It’s a five hour ride, but with the free wifi and desert scenery it passes quickly.

4. Getting though Jordanian border control was easy — and they even gave me tea! The first of many examples of  top-notch Jordanian hospitality.

5. I was told I could use USD in Jordan, but found this not to be the case. I would recommend exchanging at least some money at the border (1JD=1.5USD).

6. Catch a taxi to Aqaba — this will be done for you as soon as you step outside of the gate. There is allegedly some sort of “taxi mob” working there, and prices are set and notoriously high. The  price to go to Aqaba is 11JD but I paid 5JD as I was put in a taxi with some people heading to Petra. I guess the taxi boss was in a good mood!

7. Have the taxi driver take you to the JETT bus station is Aqaba. Tickets to Amman are about 9JD. Request to sit in the bottom level, it’s much more comfortable. It took about 4.5 hours to get to Amman with no stops. From the bus station take a taxi to your hotel and use the meter!

So, what does one do with a single day in Amman? Well, if you’re me you throw your budget to the wind (this seems to be a theme…) and spend the day eating and visiting the spa. Alright, maybe I wasn’t so bad — food in Jordan is cheap! Or, maybe it just seemed cheap coming from Israel, where one can easily drop $7 on a late night snack. Seriously, where is Taco Bell when you need it? (Not even kidding, how sad). Anyway, food in Jordan is delicious! A favorite of mine (and most people, and the King apparently) is Hashem Restaurant, where they serve up humongous portions of falafel, hummus, pita and other Middle Eastern favorites for around $3USD.

And of course, when one of my dorm mates recommended that I visit the Jafra Arabic Bath, I couldn’t resist, despite it being $25 (that’s in JD, so it would be 40USD) Even a backpacker needs to be pampered every now and then, right? The whole thing was a cool experience — obviously I went during the women only hours, and it ended up being a great place to mingle with the locals. I mean, when you’re all wearing diaper-like disposable bras and underwear and sitting in a sauna, you kind of have to talk. The spa was nice, but don’t think relaxing massage type spa. Think more like, 24 years of dead skin being violently scrubbed off type spa. Very cleansing.  As much as I was enjoying myself, there was something nagging at me the whole time, and I finally asked one of my fellow spa goers the big question on my mind. “How much does this cost?” “$15” WHAT?! But of course. Foreigner pricing is nothing new to me, but I was not about to be overcharged $15USD for a skin scrub. I spent the next 20 minutes having anxiety about how I was going to handle the situation, which I won’t lie, took away from the experience. I was hoping I would just be charged $15 too, but that’s not quite how it went.

“Okay then I didn’t come through the hotel, I just came….as a person. By myself.”

“Okay, but I just want to pay what everyone else is paying!!”

In the end she relented and apologized. She gave me her card, and told me that in the future, people should call her directly to make an appointment and it will be $15. The whole thing was a little weird, but I got the impression that her boss (a shady dude that I had the pleasure of meeting) just made up a price for foreigners. Despite everything, I would still recommend checking out the spa if you have some free time in Amman. To inquire, call 0796996857.

After the spa, some of my new friends took me to an used clothing market (my favorite) where I bought some impractical things that won’t fit in my bag (but they were so cheap!), and we spent the rest of the day exploring the city and chatting among the Roman ruins. All in all, I enjoyed Amman, and don’t understand why it has such a bad reputation. It’s one of those cities where there aren’t a lot of things to “do,” besides relax and soak up the culture, and that’s not such a bad thing. 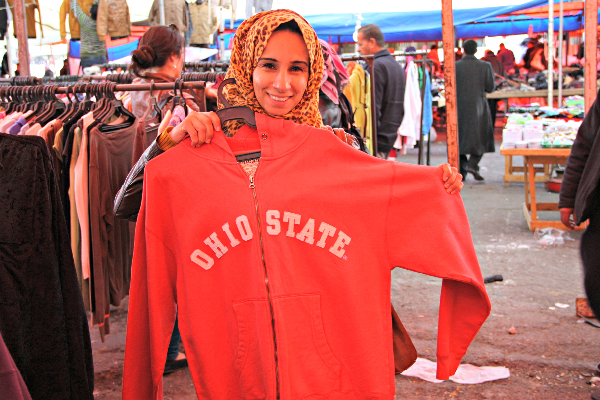 [box] I stayed at the Jordan Tower Hotel, where I got a bed in a female dorm for $17/night. Way more than I would normally pay but it was clean, comfortable, centrally located and the local staff was great. Oh and breakfast is really good, don’t sleep through it![/box]

4 thoughts on “Chillin’ in the Kingdom: A Day in Amman”