Eating Our Way Through Kashgar

7 November, 2013By The Roaming CoconutsPosted in China, Kyrgyzstan

When we arrived (for the third time!) in Sary-Tash, we were informed that we were lucky—the following day was the last before the border to China closed for ten days. Now, Sary-Tash is great for a day, maybe even two, but ten? I would go crazy. Plus I’m not sure if I could handle ten days without a proper shower (Silvia on the other hand…). After a lovely night, complete with a special spa treatment for our much-deserving host mother and a photo shoot with our host brother Norman Bet who is a future Vogue photographer, we set out early the next day. 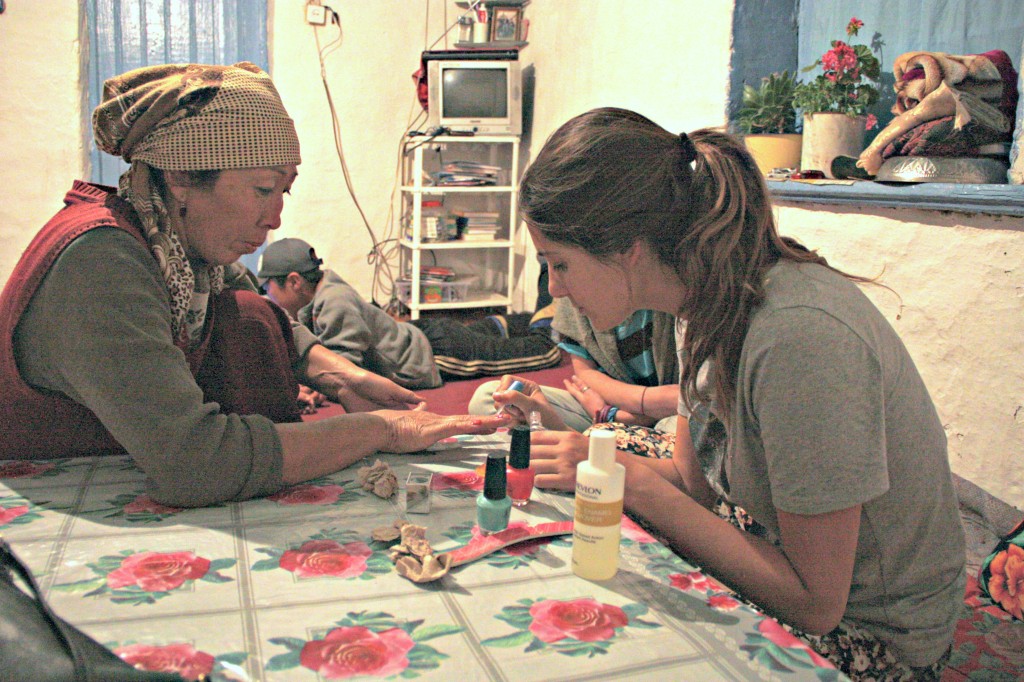 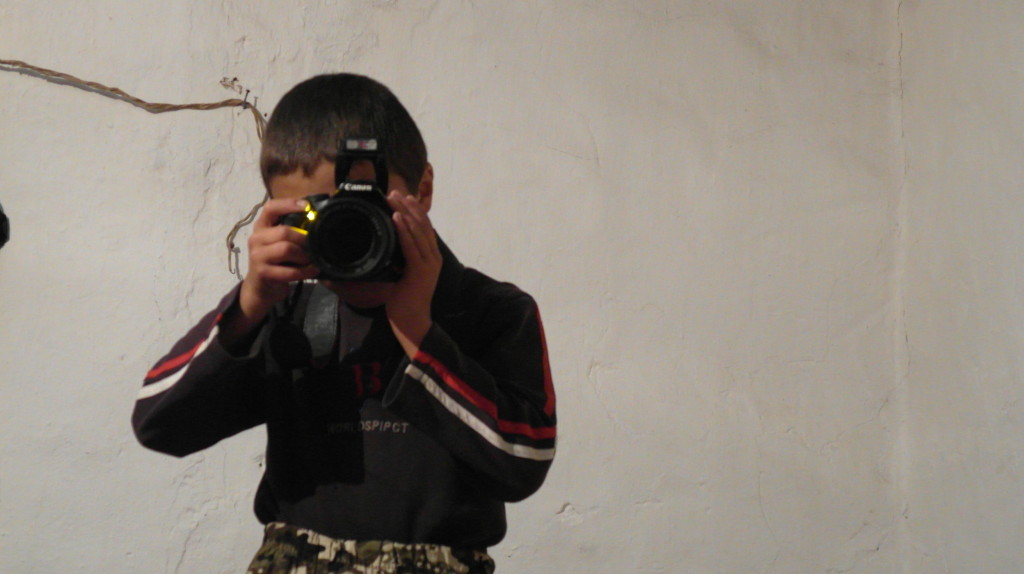 Despite the freezing temperature, we attempted to hitchhike. We paced, sat, stood, and jumped but nobody stopped. In fact, few cars even passed. High anxiety levels (mainly me) and low temperatures called for desperate measures, and soon Sasha and I found ourselves knocking on the door of one of the few houses with a working car in the driveway. The owner of the car was happy to take us to the border for $45. A little steep if you ask me, but our driver redeemed himself by buying us Fanta! And giving us rotten apples!

Given the time it took us to find a ride to Irkeshtam it was starting to get late, so we all sighed a collective breath of relief when we finally made it to the first border gate. That is, until the guard ignored the passports we were eagerly holding out to him and informed us that the border was closed.

“What?! Noooo it was supposed to close tomorrow!”

“It’s closed,” he repeated, turning to go back into his office.

Like Danielle said, we knew we couldn’t go back to Sary-Tash for another ten days (a long time even for me to go without a shower), so we resorted to outright begging.

“We need to get to China,” we pleaded. “Please let us through. Please. Please, please, please.” I know, really eloquent. But I guess he took pity on us, or just wanted to get rid of us, because he eventually unlocked the gate and waved us through.

Now, we’re not sure why China so often closes its border to Kyrgyzstan—do the immigration officers really need ten days to celebrate the Korban Festival?—or what on Earth the several kilometer long line of trucks stuck between China and Kyrgyzstan was going to do for so long, but we were relieved to have squeezed through. We called out greetings to the truck drivers as we hiked up the hill towards China, where we handed over our passports and obediently opened our backpacks for inspection. And that’s when, just as Danielle was holding up a pair of pink polka-dotted underwear to an embarrassed/amused guard (who had insisted on checking everything), our entire trip was thrown off course.

“You’re visa expired two weeks ago, you cannot enter China,” another guard told an ashen-faced Sasha. One minute we were about to be entering China, and the next we found ourselves faced with a decision: “Either the two of you go to China without Sasha,” the immigration officer said to us, “or you all return to Kyrgyzstan.” A long discussion, tight hugs, and a lot of tears later, Sasha headed back down the hill towards Kyrgyzstan and Danielle and I were left to wait for a ride across the 140 kilometer stretch to China. As China has virtually stopped issuing visas in Central Asia (wanting to discourage tourists from traveling through the Uyghur areas in the West) we hoped that Sasha could find a cheap flight to meet us in Vietnam. Unfortunately, however, she ended up flying home instead.

To rub salt in our wounds, and maybe also because the border was technically closed, the immigration officers made us wait outside for a taxi that they said probably would come. To make themselves feel better about leaving us in the frigid outdoors they lent Danielle and me some overcoats, but we weren’t greatly cheered. 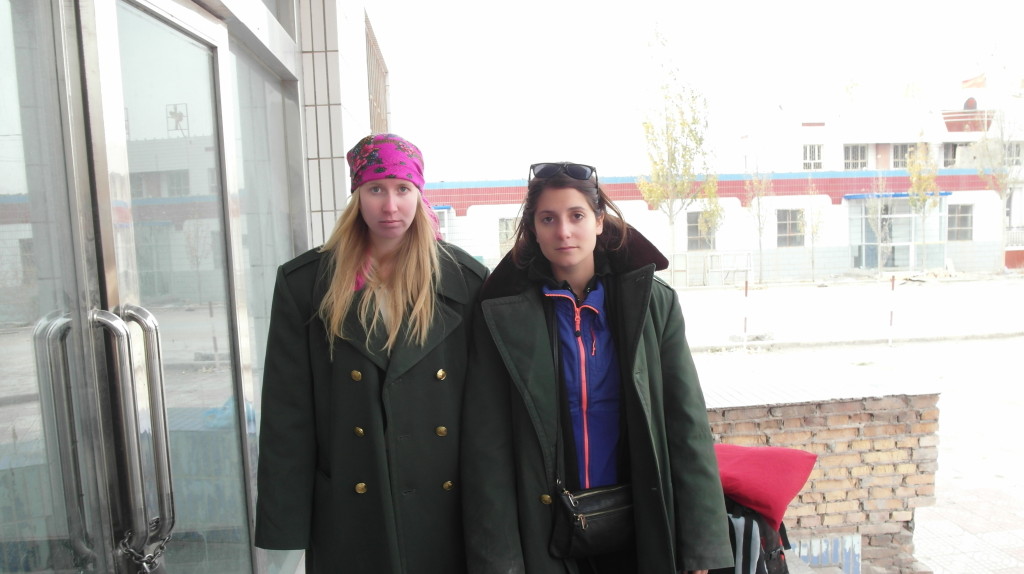 We were, however, reminded to put our misfortune into perspective as we watched how the officers treated three Uyghur men also waiting for the taxi. We had seen and heard a bit about discrimination against Uyghurs when we were in Kashgar, but this was just too much.

One of them sadly told me in broken Russian that the taxi likely would never come. “No one wants to help an Uyghur,” he said with a sigh. And when the taxi finally did come but looked too small for all of us he took my hand to say goodbye. “They will make us wait here.”

We all ended up fitting and made it to the final Chinese immigration check, where officers confiscated a heavy sack of walnuts the Uyghur men had been lugging with them and carefully inspected each item in their luggage. Our bags were left untouched.

Having watched Chinese immigration officers send away our old friend and bully our new ones, we weren’t exactly thrilled to be back in China. But we were going to Kashgar, home of some of the world’s most delicious food, so we did what so many people do in times of sadness: we ate our feelings. 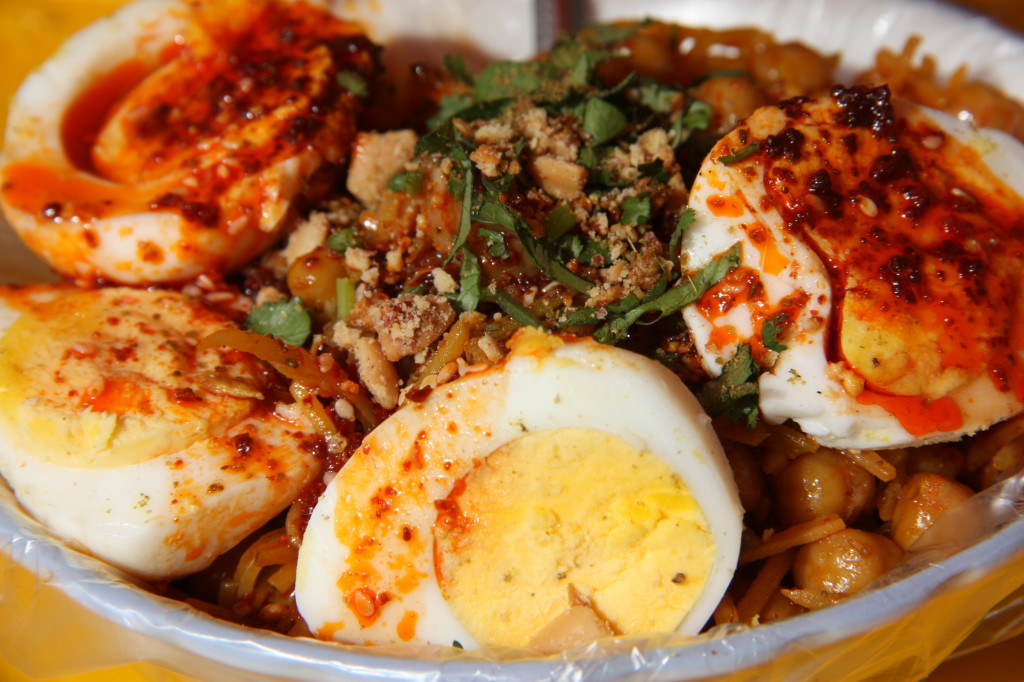 Chickpea salad was one of Silvia and my favorites. 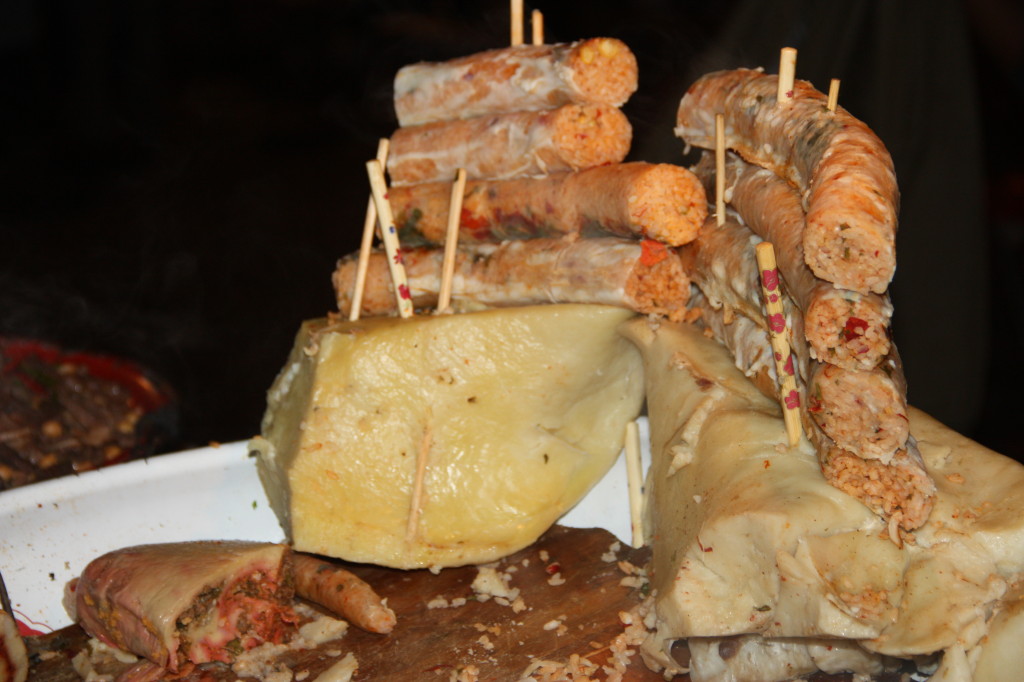 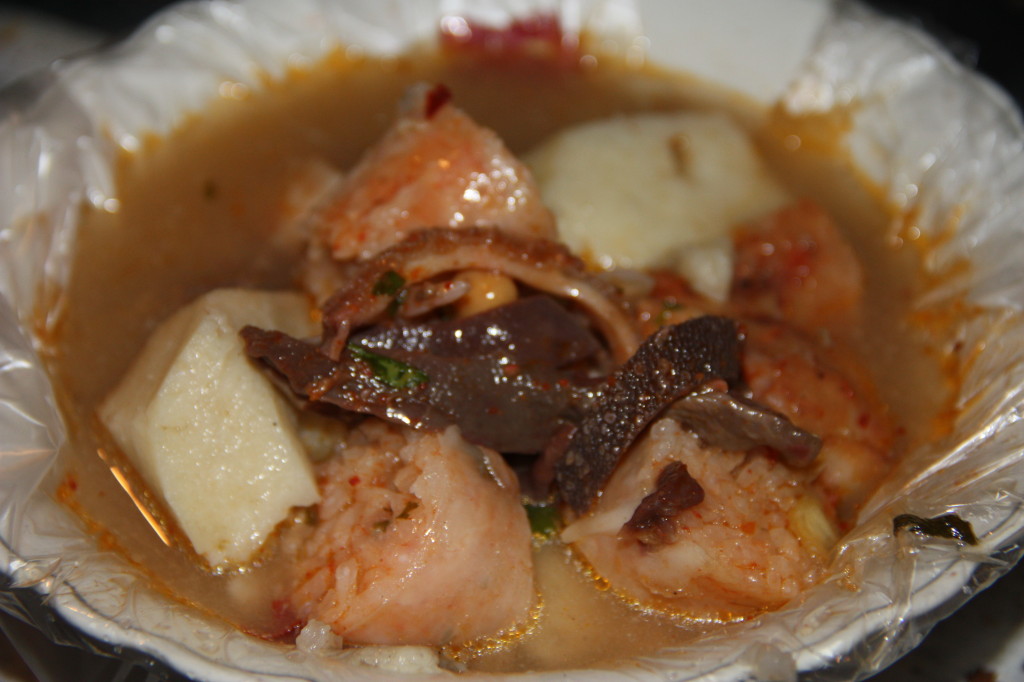 Who knew that stuffed intestine and lung could taste so good?

Kashgar is rumored to have some of the best melon in the world.

And the ice cream was…unique.

Because we didn’t have enough shashlik in Central Asia… 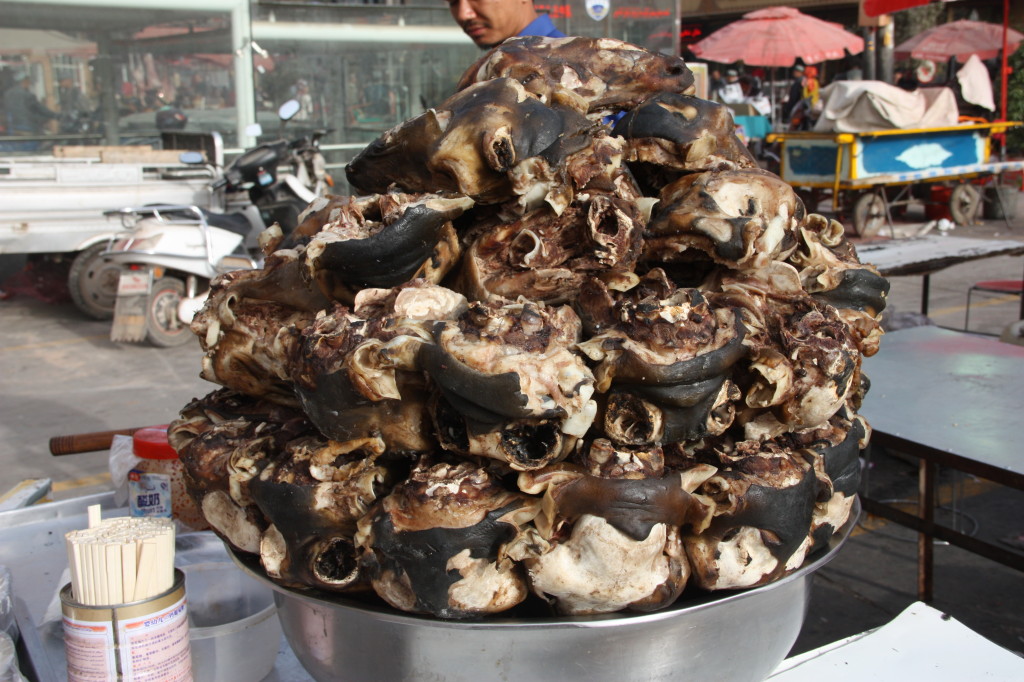 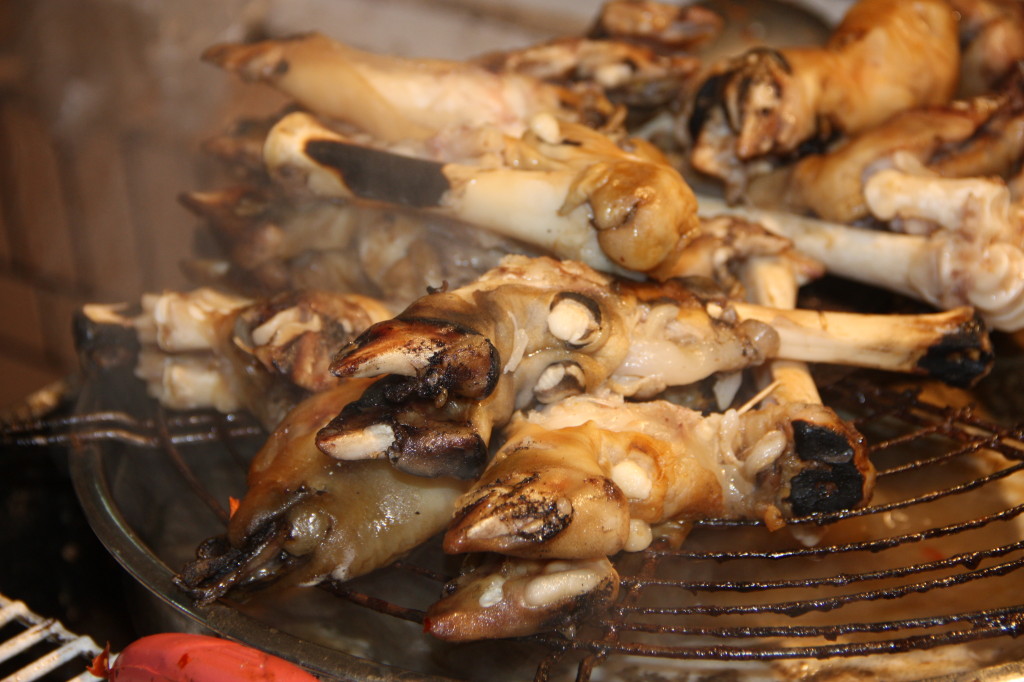 And feet!  Waste not, want not…right? 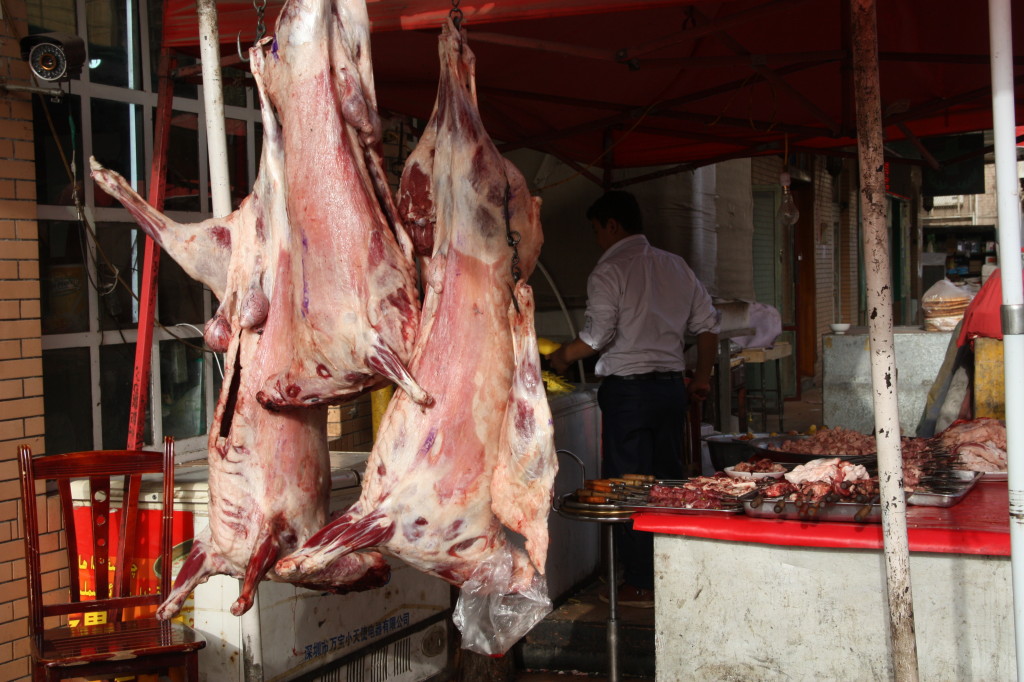 10 thoughts on “Eating Our Way Through Kashgar”