13 July, 2014By DaniellePosted in Uganda

Everything seems to move a little bit slower in Africa, so it’s no surprise that I’ve started to fall slightly behind on blogging. The Swahili term “pole pole,” meaning “slowly slowly,” can aptly be applied to well, almost every situation here. Why is the seven hour bus taking twelve hours? “Pole pole.”  When my trekking guide decides that we should cross a deep, crocodile infested river by walking across a  precariously fallen tree? “Pole pole.” And when I’m holding onto the back of a motorbike taxi for dear life? “POLE POLE POLE POLE!”

OK, I guess it’s a little bit unfair to blame my lack of recent posts on Africa’s policy of pole pole. I’ve just been…..too busy to blog?  Which surprised me. I had envisioned my time in Africa filled with long stretches of solitude. I would pass the time sitting in quiet guesthouses, reading my mindfulness meditation book and eating avocados. And blogging, lots and lots of blogging.  Umm, at least I’ve eaten a ton of avocados?  It’s also possible that my lack of recent posts could be attributed to a frantic last minute decision not to bring an iPad. Or a computer. At the time, bringing one more large, valuable item just seemed like too much. I irrationally convinced myself that I would blog from internet cafes and it would be fine. Apparently internet cafes aren’t quite as widespread in East Africa as I thought they would be.

Lucky for me, I got my computer.

Gorilla tracking was one for the bucket list. I think it was right up there with watching the Great Migration from a hot air balloon and cruising to Antarctica. It’s not easy to do and it’s certainly not cheap. To start, mountain gorillas can only be found in three countries: The Democratic Republic of Congo, Rwanda and Uganda. Only the most adventurous of travelers are throwing caution to the wind and going to the DRC these days, so that leaves Rwanda and Uganda. And then there is the prohibitively expensive price for the permit:  $700 per person in Rwanda and $600 per person in Uganda — or $350 during the low season.

It looked like something that would remain on the bucket list for some time. That is, until I realized my dad just happened to be visiting me in Uganda. During the low season. Done and done.

Getting our permits was easy — we went to the Uganda Wildlife Authority office in Kampala about a week before we wanted to go. The process was straightforward and all we needed were our passports and a lot of USD (you can pay in Ugandan shillings but at the usual, slightly unfavorable exchange rate). If you decide to go gorilla tracking during high season, it’s rumored that you have to book at least six months in advance through a tour agency.

While it’s possible to find accommodation closer to Bwindi, we stayed on Lake Bunyonyi, which is about two and a half  hours away from the park. Which meant that when our boat driver didn’t show up as planned at 5 am to take us to the mainland, I had a minor meltdown. Staying somewhere on Lake Bunyonyi is doable and probably less expensive than staying near the park, but the latter would have been so much more convenient.

Our orientation started with the usual sales pitch — this time it was a $15 t-shirt to “support the conservation efforts.” Umm, isn’t that what the $350 permit is for? A better use of $15 is to hire a porter who will carry your things (they should be heavy — you need at least 3 liters of water per person) and  to help push and pull you when the trek gets tough. And it gets tough.  Even if you think you’re in great shape, trust me when I say you should hire a porter. You don’t want to be one of those people who ends up having to be carried down on a stretcher. Additionally, hiring a porter is a great way to help the local community as the money goes directly to them, and money going directly to where it should be going isn’t exactly the norm in Uganda.

And off we went!

The first hour of the trek was pretty brutal. I was already trying to figure out the logistics of how I could be carried down on a stretcher. And the bad news? We hadn’t actually reached Bwindi yet. 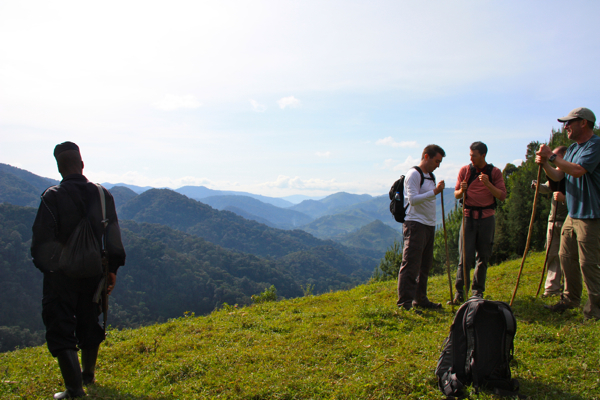 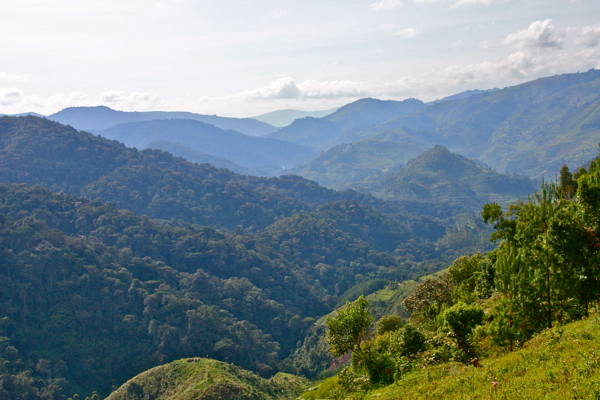 And then we entered the rainforest and things got better. A lot better. The air was cooler and everything was shockingly green and alive.  The dense vegetation offered a new challenge. While it shaded us from the sun, it also made it almost impossible to walk. Suddenly us foreigners resembled toddlers,  unable to take more than five steps without slipping and falling, never mind our fancy, expensive hiking boots. On the other hand the locals glided effortlessly through the forest in their treadless rain boots. I’m quite sure they must have been making fun of us. We didn’t care, we were in awe. 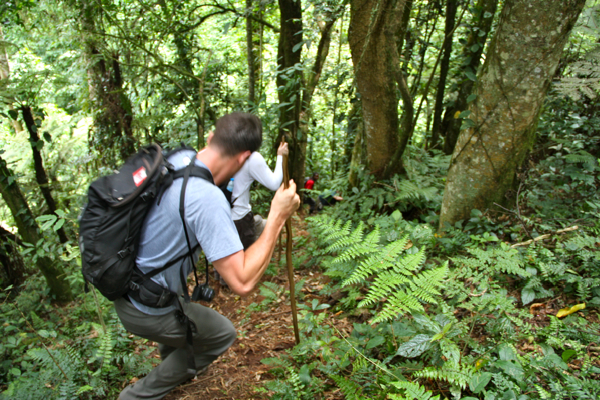 After about an hour in Bwindi we got the call that gorillas were nearby. We left our porters and armed guards (this really confused me but I guess they want to keep the group as small as possible) and went to meet the professional trackers — people who are sent out every morning to locate the group ahead of the tourists.

The gorillas were stunning. It was truly a once in a lifetime, awe-inspiring, humbling experience. 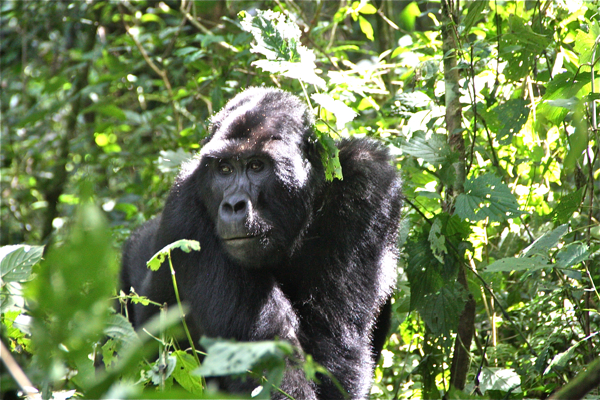 We were allowed to watch them for just one hour, as so not to disrupt their lives too much. For the most part they seemed undisturbed by our presence. At one point a gigantic male gorilla walked through our group, leaving just six inches of space between us and him. 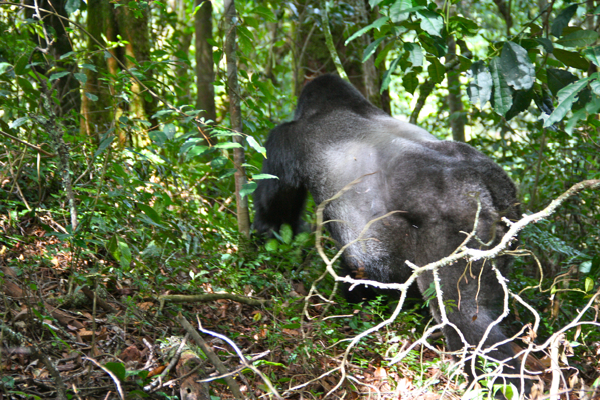 Mountain gorillas and humans share 98% of the same genetic makeup, so it was no surprise that they seemed so…..much like us?  At times taking their pictures felt almost invasive, and it seemed as though the gorillas were acting shy, many refusing to turn their heads towards us. In turn it left me feeling a little bit sad. While gorilla tracking might seem unethical to some, in reality it’s done relatively responsibly  and it’s the best way to support and protect these animals whose numbers have been dwindling due to poaching, war and loss of habitat. There are only estimated to be between 600-800 mountain gorillas remaining in the wild. During high season in Uganda, gorilla tracking brings in nearly $60,000 per day in fees. Whether or not the Ugandan government actually cares about the preservation of these animals, they’re not about to let go of the $1.8 million they bring in every month. Corruption in Uganda is a whole other story, but when your guide tells you that 20% of park fees are reinvested into the surrounding community, take a minute to think about how many schools, hospitals and paved roads you’ve seen (spoiler: none). 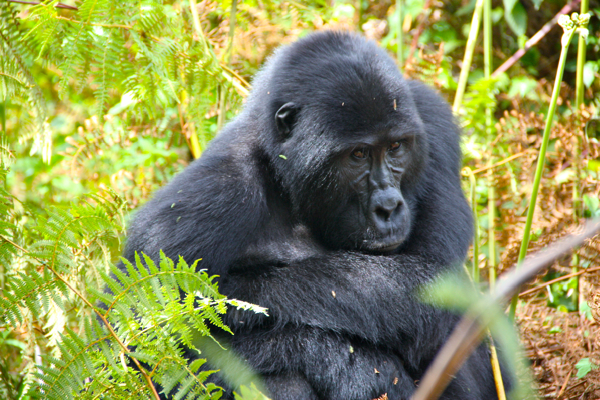 So, is gorilla tracking worth it?