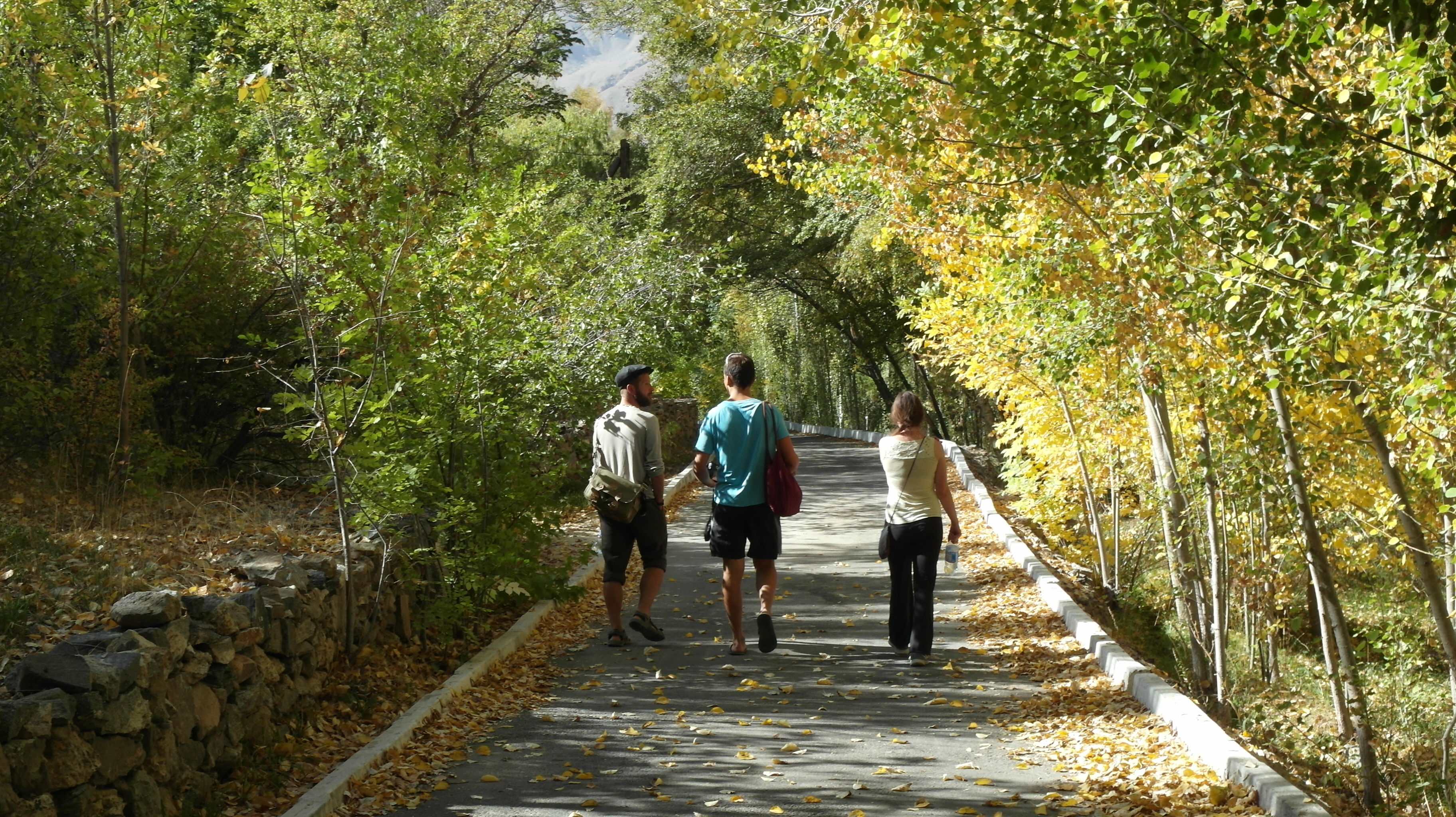 Khorog, We Love You

19 October, 2013By The Roaming CoconutsPosted in Tajikistan

I think it’s time to come clean with you guys. Some of our stories, particularly the dialogue, haven’t happened exactly as we’ve told you. You see, since coming to Central Asia, everything has been in Russian. While Sasha and Danielle have learned quite a bit (more than Danielle or I ever learned of Thai in the many months we volunteered in Thailand), most of our interactions with locals have fallen on the meager three semesters of college Russian I have under my belt. Like, buried deeply under.  Sometimes my lacking vocabulary has called for a little creativity while translating.

Did the shepherds we stayed with in Kyrgyzstan really herd 600 sheep? I mean, I think they used the word for sheep… Did our host mother really tell me to take the biggest bed because I’m so tall? Um, she could have. Did we really eat yak meat on a truck in Tajikistan? As if I know the Russian word for yak. And were the guys in the back of our Pamiri jeep ride really ignoring our refusal of beer, or did they just not understand when I told them to stop? No, my Russian isn’t that bad, they were just being annoying.

But when we arrived in Khorog, Tajikistan we were given a welcome break from the misunderstandings and faltering conversations– everyone spoke English! Home to a large population of Ismaili Muslims, Khorog receives funding from Aga Khan, the 49th imam, which means the city can have its own university, twelve schools, and host one of the three campuses of the University of Central Asia. Everyone learns English, and there is even an American corner in Khorog’s youth center filled with hundreds of brand new books, DVDs, games, and a life-size cut out of President Obama. It feels just like an American school library, the closest to home Danielle and I have been in ten months and twenty-two months, respectively.

But we loved Khorog for more than its widespread use of English and reminders of America. Khorog is nestled at the foot of the Wakhan Valley, offering a dramatic mountainous landscape while also making the city feel like a cozy safe haven from harsh Pamir winds. And the people of Khorog must be the nicest we’ve met (I know I always say that, but this time it really is true!). Don’t have correct change at the market? No problem, the salesperson will let you pay whatever you can. Don’t feel like walking up the steep hill to your hostel? Wait at the side of the road for about twenty seconds and somone will stop to offer you a lift. 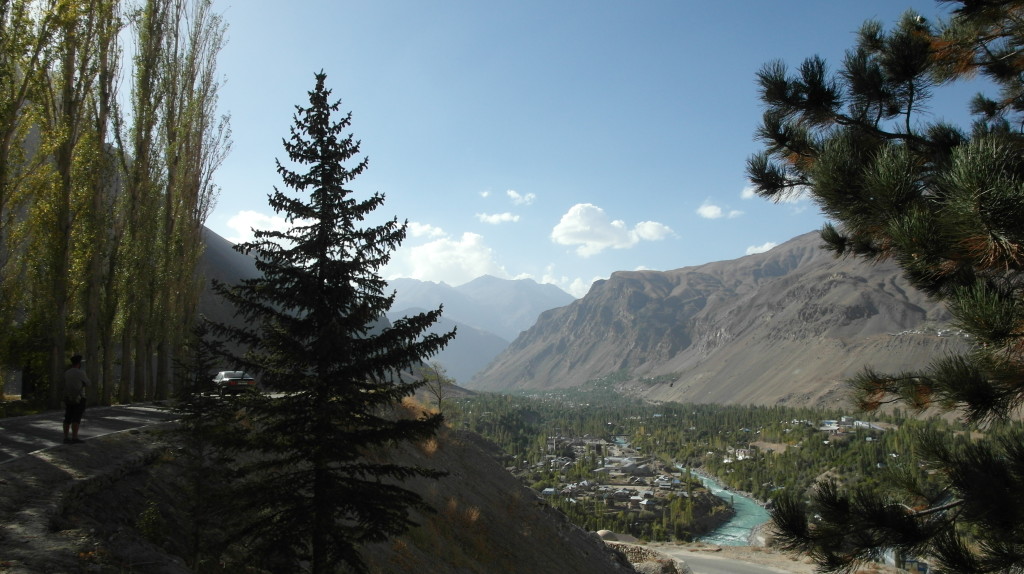 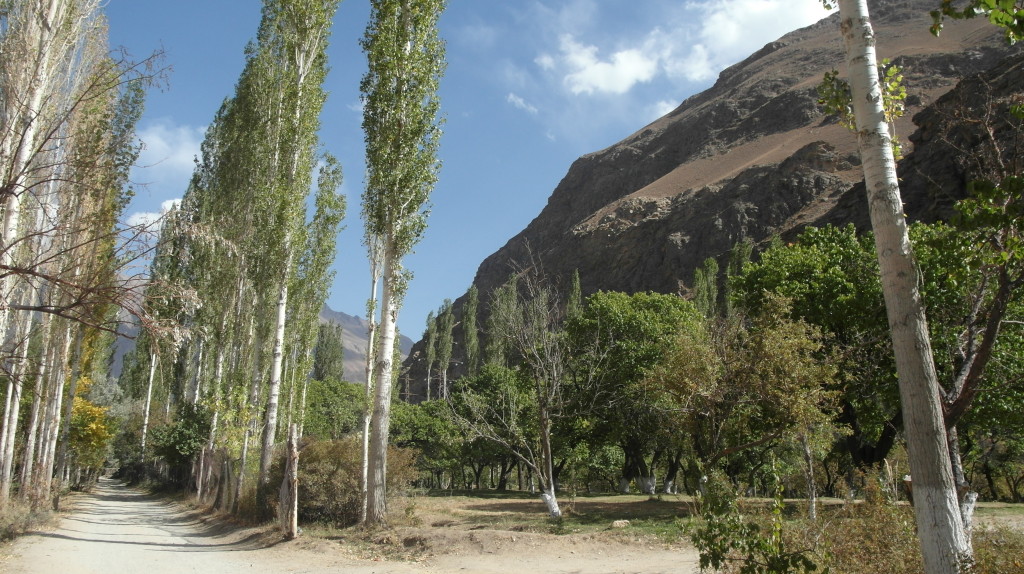 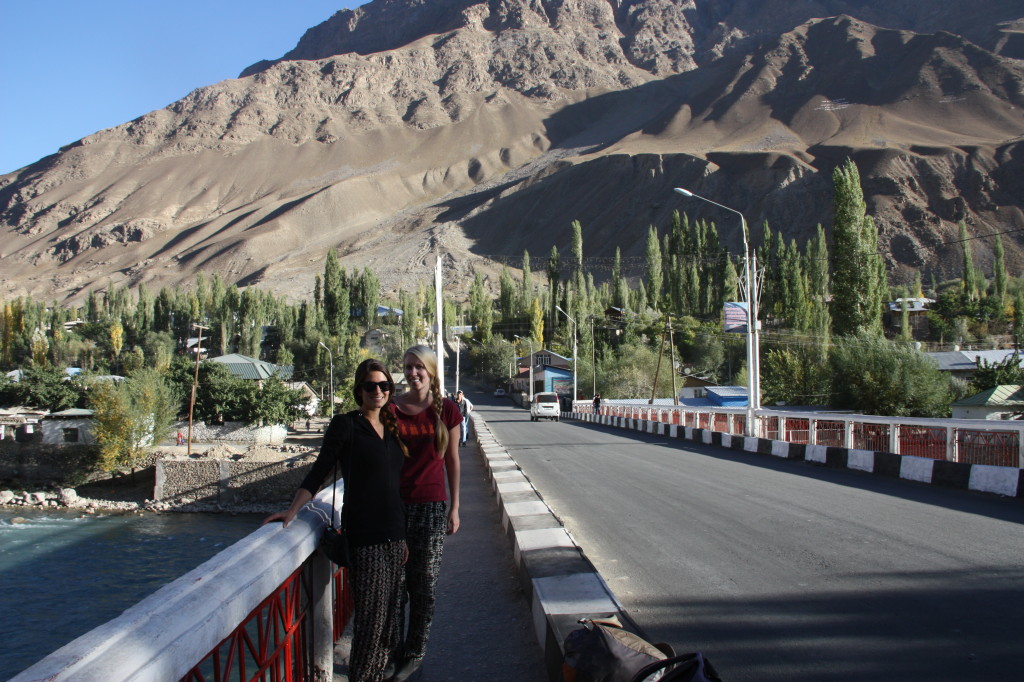 We ended up spending seven days in Khorog, buying Pamiri handicrafts at the bazaar (no one can lift Danielle’s backpack anymore) and visiting the second highest botanical garden in the world, but mostly we just relaxed under the pear trees at our hostel, drinking tea and listening to one of the hostel workers strum Bruno Mars songs on his guitar while the manager played table tennis with his kids. Seriously, does life get any better?

Okay, maybe Khorog isn’t quite the sweet slice of paradise I’m making it out to be. When the boy with the guitar isn’t singing love songs in the garden he’s telling us his big plans for leaving and moving to America. Khorog is one of the poorest areas of Tajikistan, which is the poorest country in Central Asia (and one of the world’s poorest). Up to a third of native Tajiks live outside of Tajikistan, which certainly appears true for Khorog. With the Aga Khan Foundation providing almost the only source of cash income, university graduates have few prospects for using their fantastic educations. Most young men move to Russia, often marrying Russian women even if it means abandoning their Tajik wives. Women are left working as waitresses for $80 a month, some telling us that they can’t find husbands in Khorog because all the men who stay are too lazy. And when we took a closer look at the peaceful streets in Khorog we could see bullet holes left in buildings from the Gorno-Badakhshan conflict in July 2012, which had temporarily transformed our beloved mountain oasis into a warzone.

Yet still, looking around at Khorog’s beautiful surroundings and watching the amazing hospitality and strong communal bonds of its people, I can’t help but feel a little envious of the same people who are telling me they dream of moving to America. Of course the difference between our situations is obvious: if I wanted to move to Tajikistan I absolutely could. But will the boy with the guitar ever make it to America?

We stayed at the Pamir Lodge in Khorog, paying $6 per person for one shared room (newer rooms with beds instead of mats are available for $10). The hostel staff were very helpful, and it was a great place to meet other tourists. Most were cyclists, including two groups who were cycling for charities. Nicolas and Alex are raising money for the Lantern Community and the Craft Training School while also blogging about their journey at www.whynotflytoshanghai.wordpress.com. Anthony and Matt are cycling around the world in memory of their friend Tony Young, who was an avid cyclist and died of a brain tumor. They are blogging at www.travellingyoung.co.uk  to raise awareness and donations for Brain Tumour UK.

2 thoughts on “Khorog, We Love You”