2 January, 2014By The Roaming CoconutsPosted in Myanmar, Volunteer

I initially made my way to Asia as part of the American Jewish World Service’s Volunteer Corps.  I was placed in the lovely city of Chiang Mai, in northern Thailand, where I spent time helping out at the incredibly inspiring Burmese NGOs, Shan Youth Power and NEED-Burma.   It was an amazing experience and I learned so much about Myanmar (or are we still calling it Burma? Unclear.) but never got to go.  Actually I wasn’t even allowed to go there while I was volunteering.  Which made it kind of weird when people asked me how Myanmar was after finding out what was I doing.

So, with mere weeks left in Asia, I made the executive decision that I had to get to Myanmar, or I would forever be answering that question awkwardly.  Ok, maybe it was more like I was insanely excited to experience first hand the country with which I had been working. And also to see just how much Lephet Thoke, a national delicacy made of fermented tea leaves, crispy beans, peanuts, garlic and tomato, I could consume.  I know you’re thinking, that sounds really weird.  But I promise it’s delicious; it’s one of my favorite foods in the entire world, and I’m a pretty big foodie.

So, I booked an Air Asia flight, went to Bangkok to get my visa, and off I went! [box] Getting a visa for Myanmar:

Getting your visa at the Myanmar embassy in Bangkok is easy!

A copy of your passport

Your flight itinerary (for same day visa only)

And after emptying my bank account getting visas for Central Asia (Kazakhstan– $160, really??) I was pleasantly surprised to find that a same day visa was only about $36.[/box]

In a testament to just how easy it is to solo travel but never actually be alone, I spent almost my entire time in Myanmar with someone I met in line at the airport in Thailand.

As we were driving from the airport to the hostel I had booked, Motherland Inn 2 (one of my favorite hostels of all time, book in advance) I immediately knew that I was somewhere special.  While Myanmar is part of Southeast Asia, its proximity to the Indian subcontinent makes it incredibly culturally distinct.  Both men and women don floor skimming, skirt-like longyis. 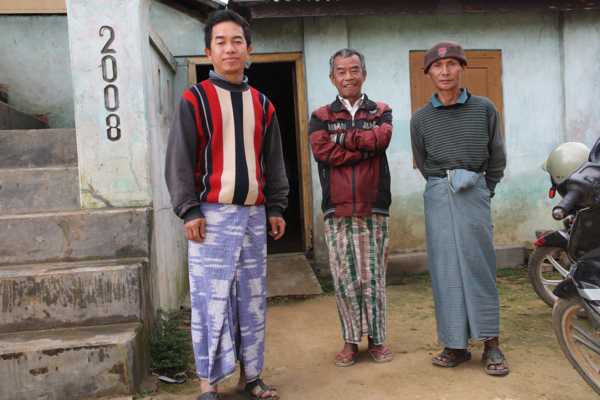 Swirls of Thanaka, a paste made from ground bark, decorate the faces of women, children and to my surprise, even many men.

And those friendly smiles baring red teeth (and the subsequent globs of red spit dotting the sidewalks)!  The colorful smiles are result of the buzz-inducing betel nut or paan, the chewing of which is widespread among men.  Stands selling this addictive combination of betel nut, limestone paste and tobacco wrapped in a betel leaf dot nearly every corner.  I sampled the weaker version (if I had tried the strong betel nut I would have had to lie down for  a few hours, according to a local), and wasn’t a fan.

So it was safe to say that I loved Myanmar upon first sight.  The problem was that I only had TWELVE days there.  For the first time on my backpacking trip I was going to be rushed!  And in such a complex, interesting county!  I decided that instead of speeding through and trying to fit everything in, I would take  my time and try to absorb my surroundings, even if it meant not seeing everything.

In Yangon I was probably the only person like, ever, to skip the famed Shwedagon Pagoda, because like I previously mentioned, I’m templed out and it cost $8. Instead, I paid $1 to ride on the circle train, which does a three-hour loop around the countryside of Yangon. It was a great way to get a glimpse into what life is like outside the bustling city center, and to interact with the locals.  Like this monk who wanted to practice his English. 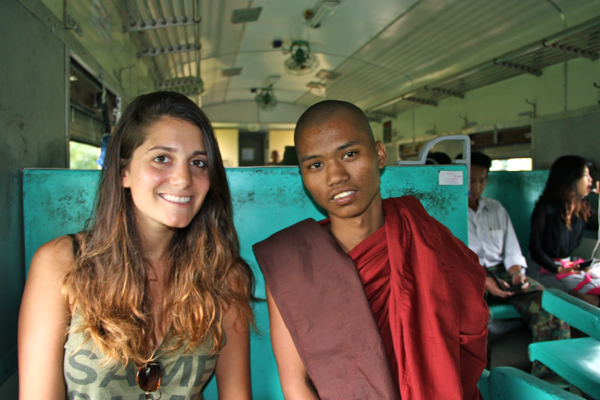 Or this adorable young paparazzo, whose mother now has about 40 pictures of my legs on her phone (he’s still learning). 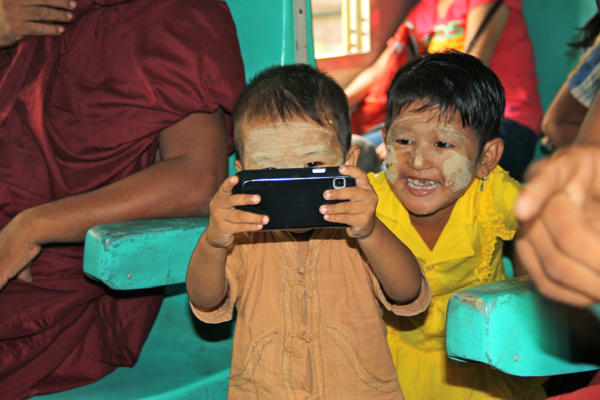 And one more picture because he was so cute. 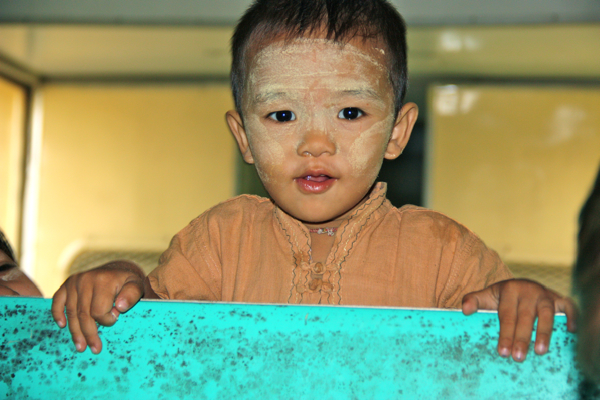 I spent days getting lost in the busy streets and wandering random alleys, perusing numerous antique stands and sampling whatever street food caught my eye.  Avocado shakes were a favorite.

I also made time to visit a synagogue.  Yes, there is a Jewish synagogue in Myanmar!   During the British rule, Jews flourished in Yangon, but most of them fled upon the Japanese invasion.  Though there are only about 20 Jews left today, the Musmeah Yeshua Synagogue still holds services with the help of caretaker Moses Samuels (and an attendance boost from Israeli embassy staff). 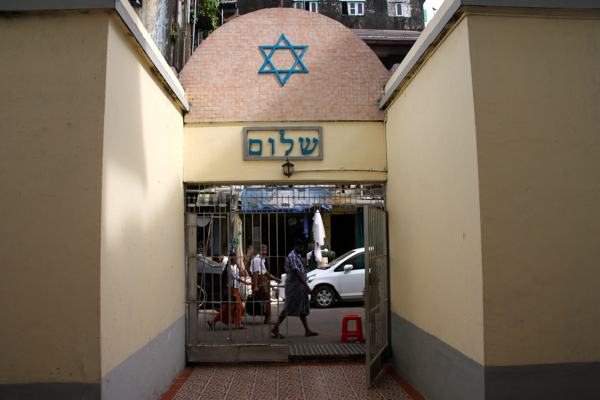 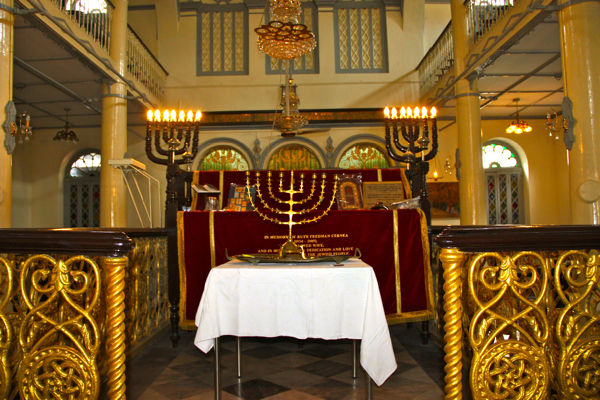 After Yangon I headed to the ancient city of Bagan — home to the remains of roughly 3,000 temples and pagodas — where thanks to the weird scheduling of the overnight bus, I was able to arrive just before sunrise.  Because we all know I probably wouldn’t have woken up for it otherwise!  I know I’ve mentioned that I don’t really like temples, but these are worth seeing (though their restoration has been a topic of much controversy).  And if I’m saying that, you know they must be good.   Also, if you have an extra $300 (so not you, backpackers), you can see it all by hot air balloon!  Someday….. 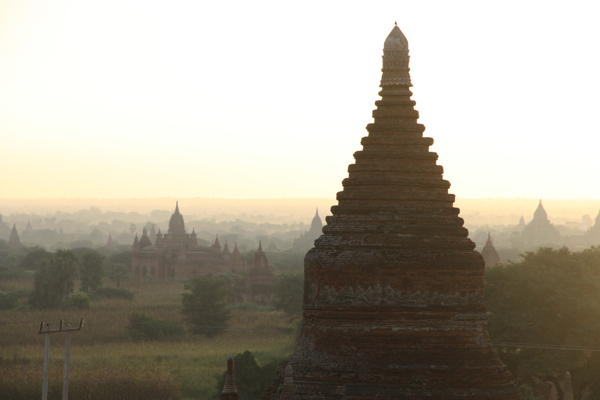 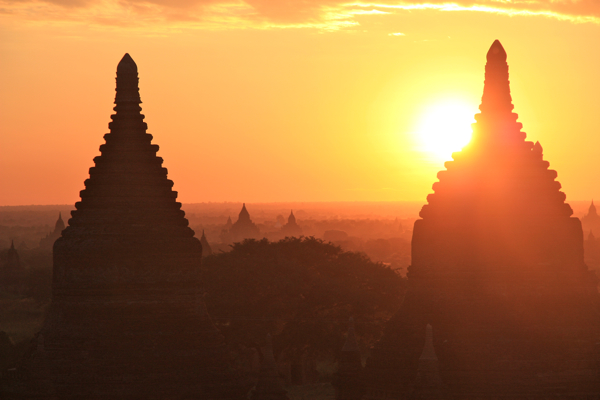 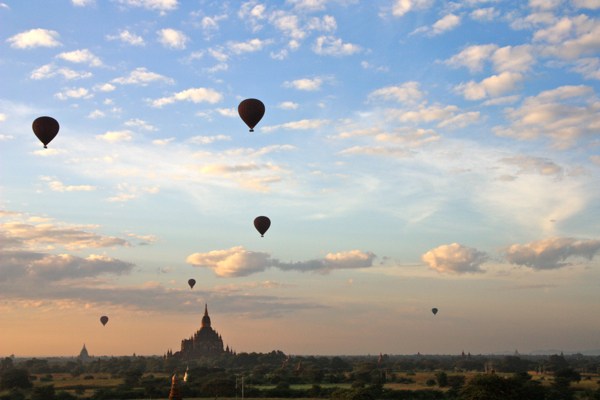 And a day started with so much beauty should end in a similar way, so we decided to take a sunset cruise on the Irrawaddy river.  If you get a group of 5-6 people together you can easily get your own boat for about $2/person. 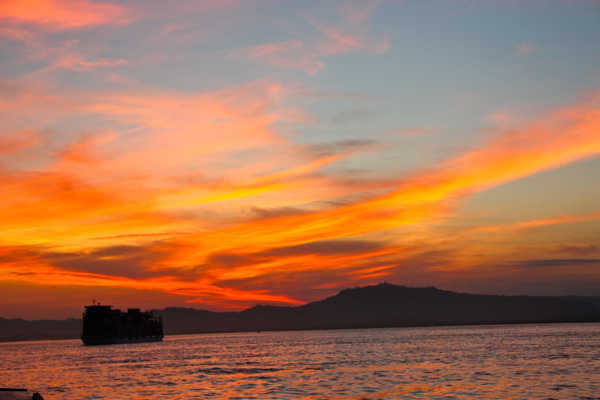 After Bagan a group of us headed to Mandalay, where we spent most of our time ordering way too much food (which, when a dish only costs 20 or 30 CENTS is quite easy to do) and drinking the local beer, possibly my favorite in Southeast Asia. 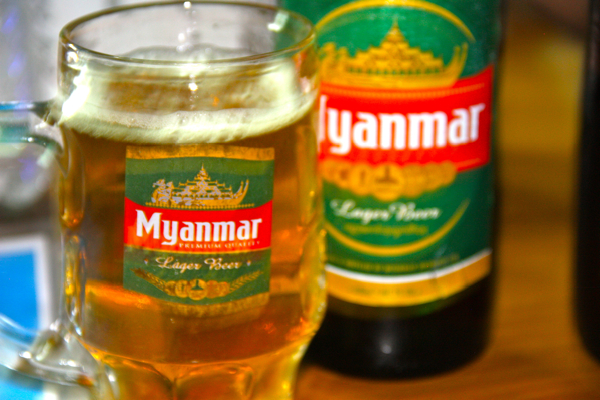 The next day we set out in the early morning so we could be there when the monks receiving their daily alms.   While I found this to be a beautiful and moving experience, the large number of tourists shoving their DSLRs in the faces of these young monks (even as they were eating!) gave the whole thing a zoo-like feel and dampened the experience for me. 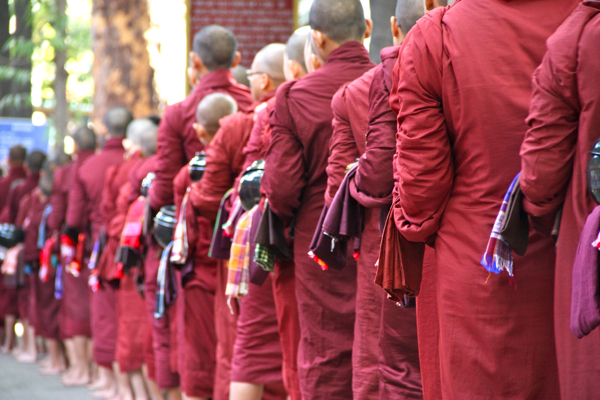 After Mandalay we headed to Kyaukme (pronounced sha-mey) in Northern Shan State for some trekking, which was such an amazing experience that it deserves its own blog post.  Teaser: I learned how to ride a motorbike (finally) and had tea with rebel soldiers.  To be continued.

Money: I had always heard that you needed new, pristine $100 bills in hand when you arrived in Myanmar, so the day before I left I ran around Bangkok like a crazy person trying to exchange my baht for new, crisp Benjamins. Apparently that was unnecessary. There are numerous ATMs in bigger cities that accept international cards. There are also ATMs at the airport. The best place to exchange money is at the airport. *Make sure you hold on to some dollars, I ran into a few places that would not accept kyat.

Costs: Accommodation is what really breaks the budget. There is a complete lack of supply to meet the demand, meaning that hostels are much more expensive than the rest of Southeast Asia. Dorm rooms are also much rarer. Private rooms run around $20-25, while dorms are $10-12. I found transportation costs to be pretty on par with the rest of the region, especially for long distance bus rides. And lastly, food is incredibly cheap, especially outside of the cities.

Transportation: I found it quite easy to get around. The busses were also surprisingly reliable. With just one exception, all of mine were on time. An overnight journey costs about $15, whereas a shorter journey runs abut $5-6. If you have more time, you can the train, which supposably has great great views (and takes much longer).[/box]