4 October, 2013By The Roaming CoconutsPosted in Tajikistan

“How much cash should we take with us to Tajikistan?” I asked the perpetually-grumpy-but-secretly-nice worker at our hostel in Osh.

WHAT the what.  $800 should (ideally, H&M visits excluded) last me more than one month!  We repeatedly heard that Tajikistan, in particular the Pamir region, could be expensive, but there was no way we were going to pass up traveling The Pamir Highway, otherwise known as the “roof of the world.”  But for all of the Nat-Geo worthy views and worldclass hospitality that lay ahead of us we just could not spend that much money.  Just no way.  We decided we would each exchange $200 and make that last as long as humanly possible.

We set off in our private car (old minivan, the epitomy of Central Asian luxury) that would eventually bring us to the Tajik city of Morghab.  We spent one night in our former stomping ground, Sary Tash, in an attempt to get acclimated to the high altitude — a request from our fellow passengers, a couple of Swiss trekking guides.  Although our visit was brief and we didn’t get to milk any cows, Sary Tash was just as quaint and beautiful as we remembered it, if not more so; this time around the mountains were blanketed by snow. 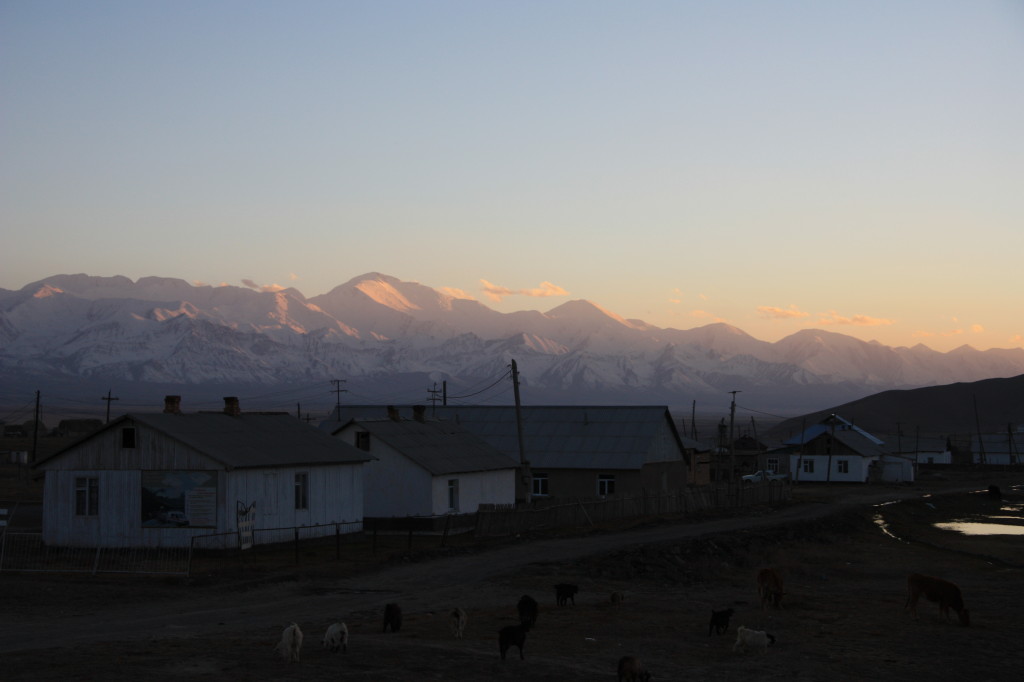 The acclimating worked.  Sort of.  We were still gasping for air the next day when we stopped at one of the highest passes of our journey for a photo-op at 4655 meters (15,272 feet or about half the height of Mount Everest for all you Americans). 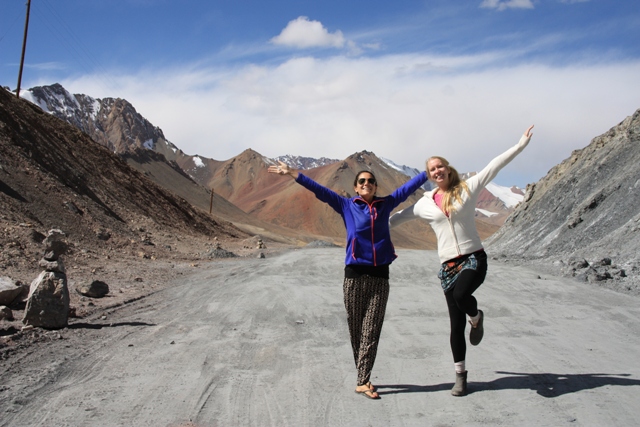 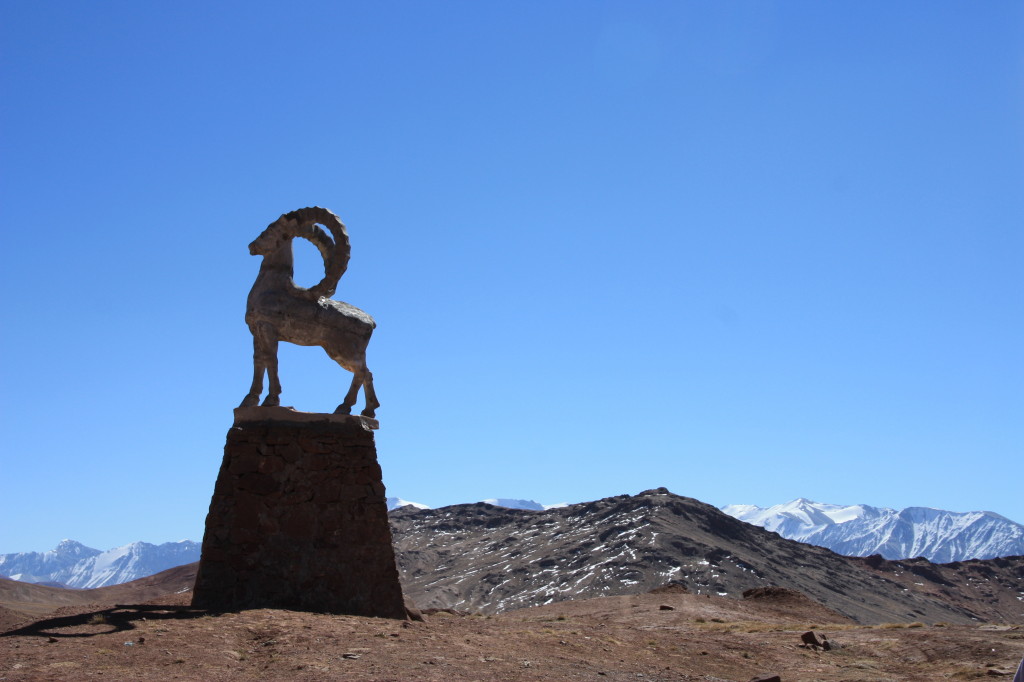 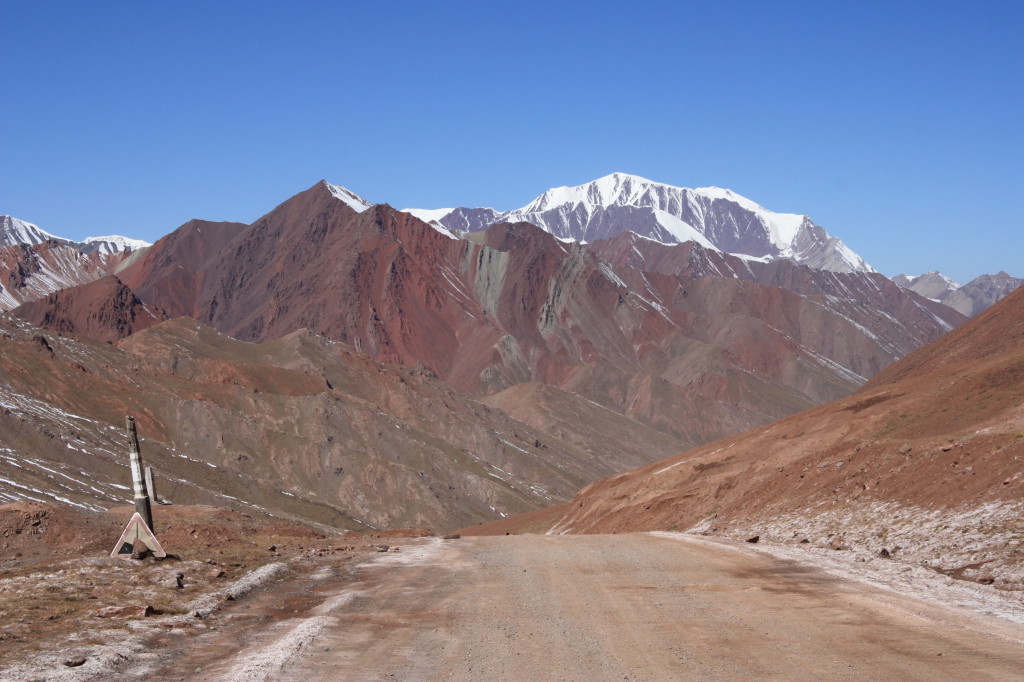 We managed to cross the border into Tajikistan with little problem, although my butter knife was temporarily confiscated and the very bored border guards requested beer, vodka, a mysterious $15 fee and copies of our passports.  In the end we only had to part with a pack of cigarettes (not ours, don’t worry) and take a couple of photos.  But of course. 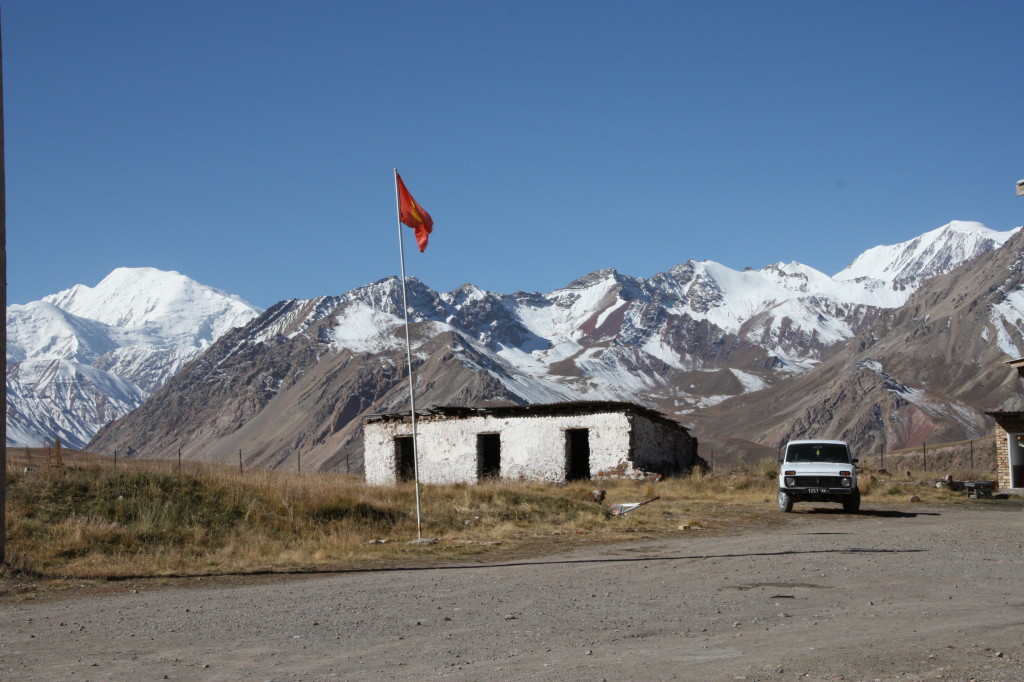 We spent the next night in Karakul, a dusty, desolate and seemingly deserted town.  A great contrast to the breathtaking lake that surrounded it. 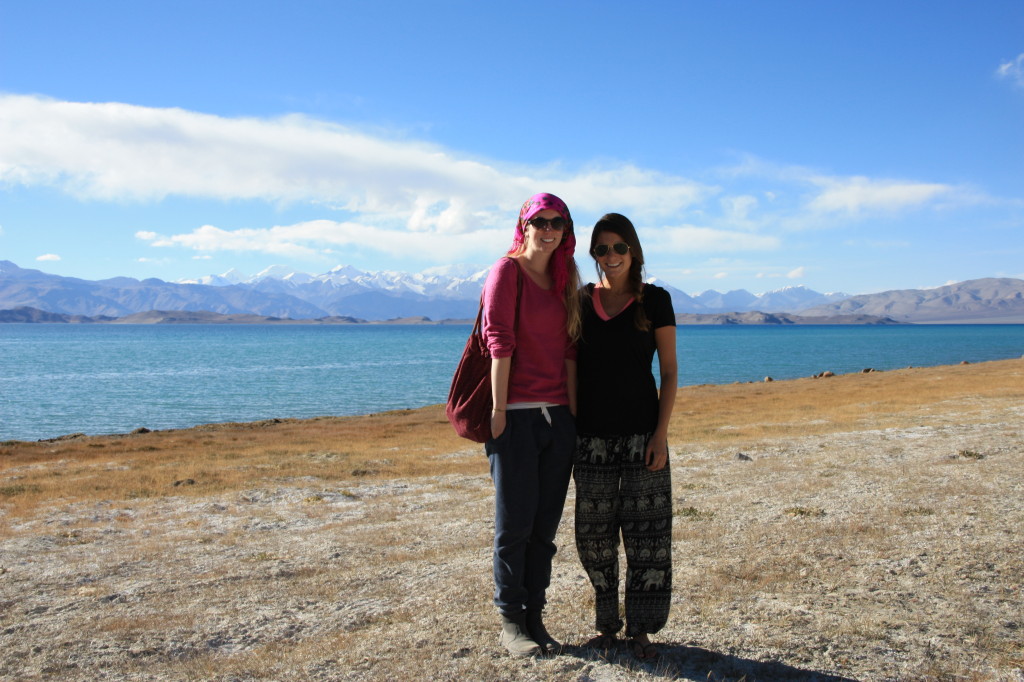 Our next stop was Murghab, an only slightly more city-like town.  Here we really started to feel like we were in a new country, as the houses and landscape were much more Afghan than Kyrgyz. 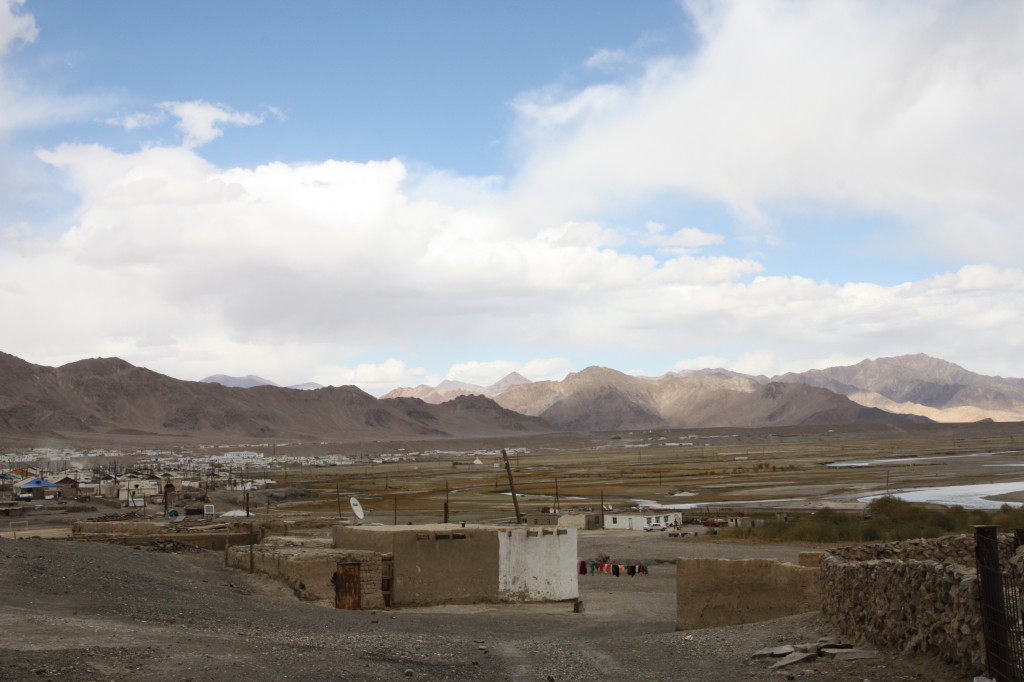 In Murghab we experienced some of the famous Tajik hospitality we had heard so much about when three police officers bought us coffee and offered to show us some sites around town.  “But it’s your decision,” they assured us.  “Tajikistan is a democracy, so you can do what you want.  We are a democracy.”  I almost asked them how long the dictator had been in power, but switched my wording to “president” just in time, phew.

Still intent on our mission to make $200 last (our guesthouses in Karakul and Murghab had generously given us student discounts) we found a free ride to Khorog.  Well, sort of free.  The three of us squeezed into the backseat of an old army jeep with two young guys (Sasha ended up wedged on the floor, of course) while an old man, “The Boss,” and a very buff (think bodyguard) driver sat up front.  They had been in Khorog for work, though what that is remains a mystery, as apparently their profesion was left out of the occupation section of my Russian textbook.  What we do know is that the boss was important enough to be given a large Tajik flag when we passed through a security checkpoint, and we wouldn’t want to bet against his driver, who sported a large knife scar across his neck, in a fight.  But the two younger guys?  Comic relief? 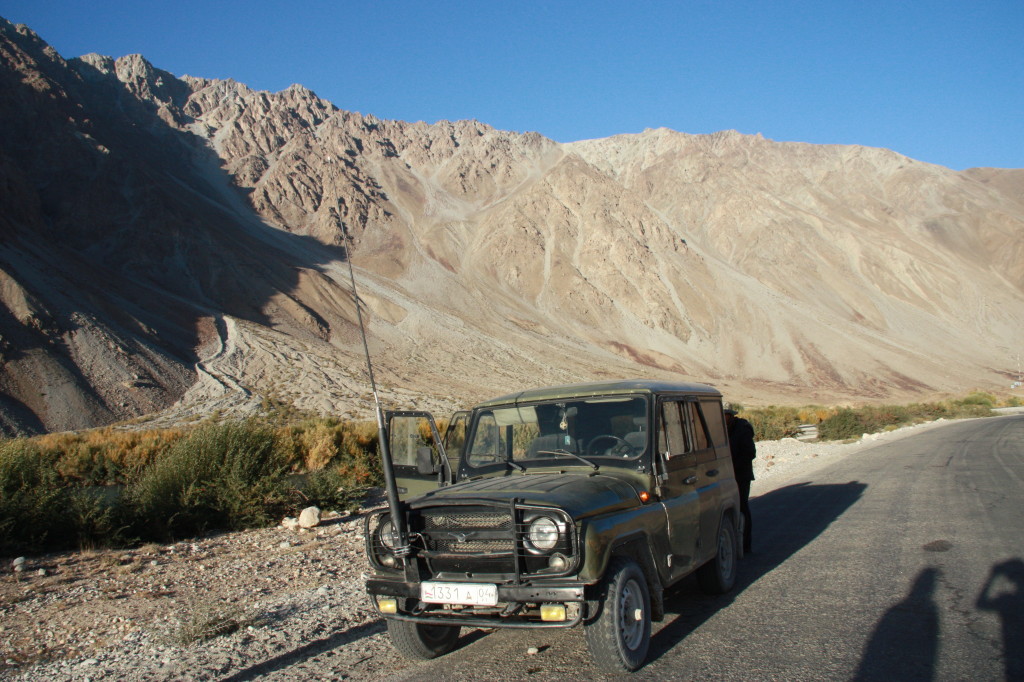 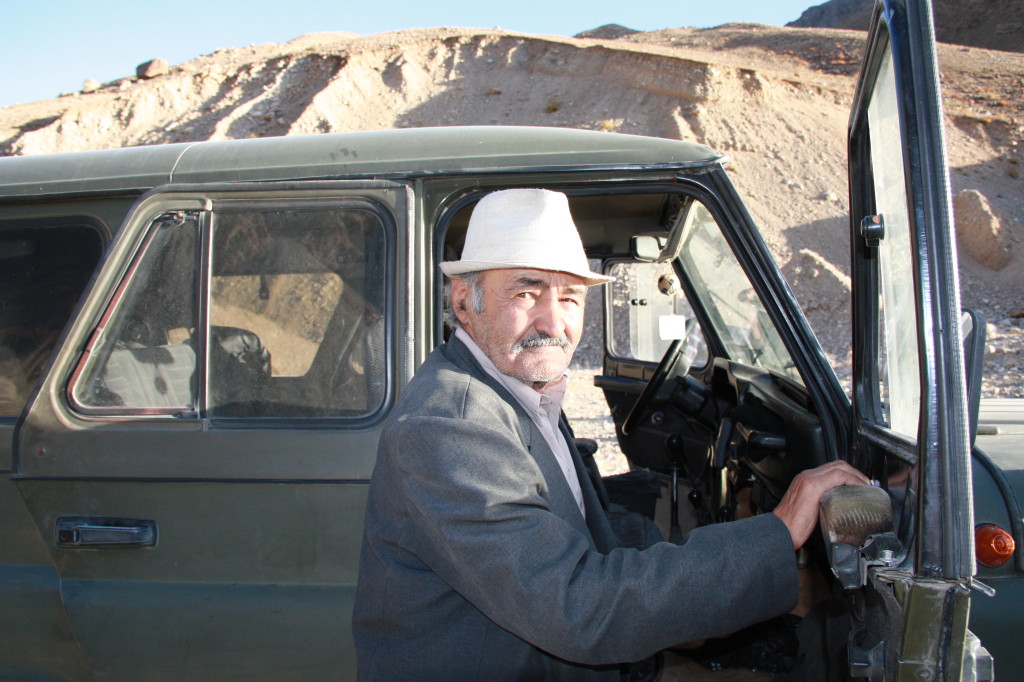 The boss and his “driver” ended up being incredibly kind, treating us to lunch and a hot spring bath, and delivering us safely to our hostel, though, I’m afraid that they had to endure constant bickering in the back, as we certainly weren’t getting any comic relief from our seatmates and their persistent attempts at getting us to have a beer with them (at 10 am, driving on an unpaved road, no thanks). 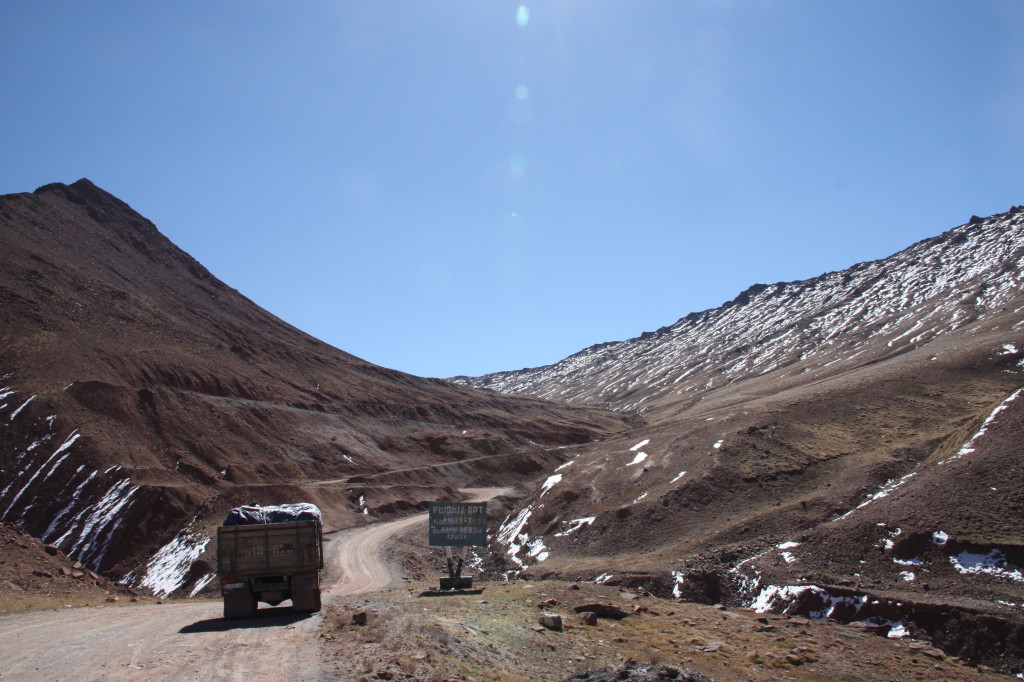 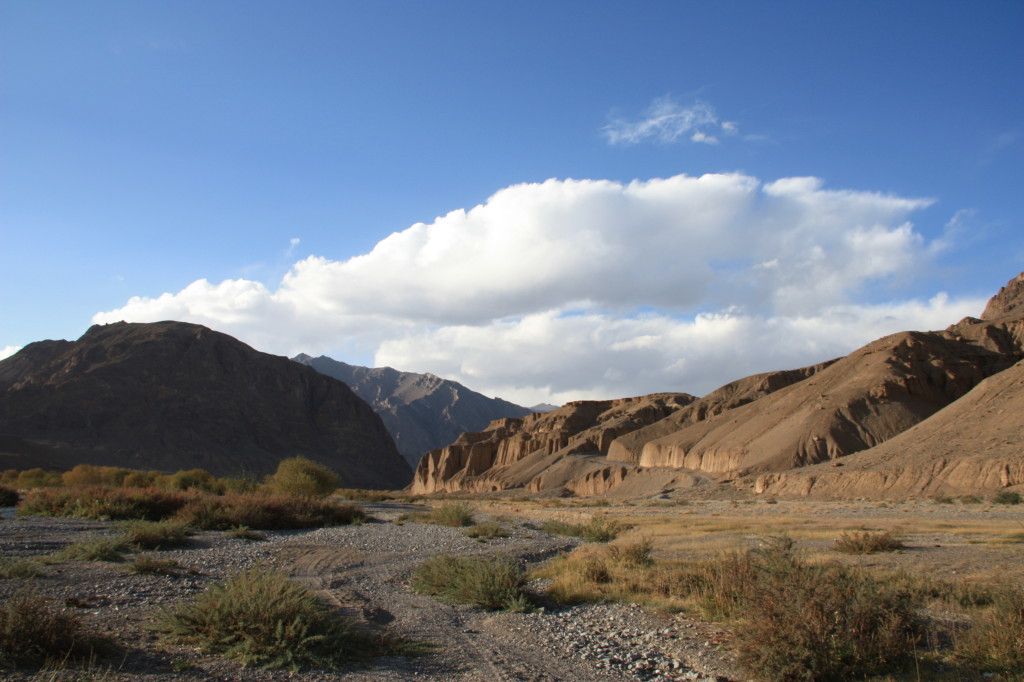 Total money spent since entering Tajikistan: $16.  Were the savings worth the discomfort?  Unclear.

Car to Tajikistan arranged by Osh Guesthouse, $60 per person, plus $20 total for each overnight.

7 thoughts on “Pamiri and Proud”