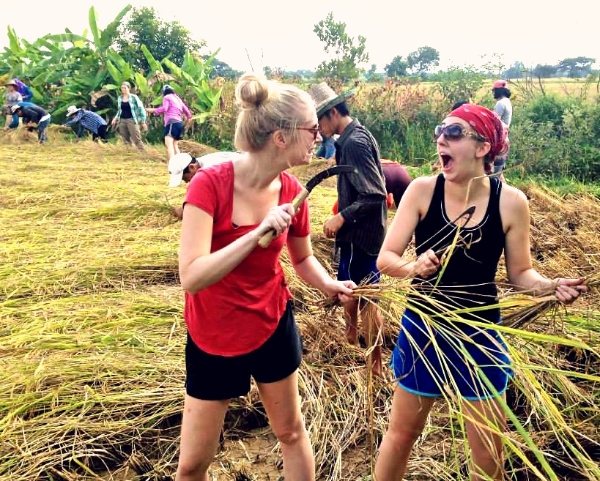 20 December, 2013By The Roaming CoconutsPosted in Thailand, Volunteer

Am I the only one who associates “harvest” with creepy sacrifice rituals? Have I been spending too much time watching supernatural TV shows and not enough working the land? Well duh.

One of the nice things about returning to Chiang Mai after months on the road was already knowing the ins and outs of the city. I didn’t have to wonder how much transportation should cost (20 Baht) or go searching for the best places to eat (basically any food stand), and I already had favorite spots in the area. One of which happens to be NEED-Burma‘s farm just outside the city. Danielle could tell you more about it (she volunteered there for a while many moons ago), but I just know it as the place where my friends, many of whom have also worked or volunteered there, go to hang with chickens and puppies and eat breakfast noodles and tea leaf salad (Burmese food = ahmazing!).

A few weekends ago we decided that we had been mooching off the farm enough and it was time to lend a helping hand. Rice harvest time! 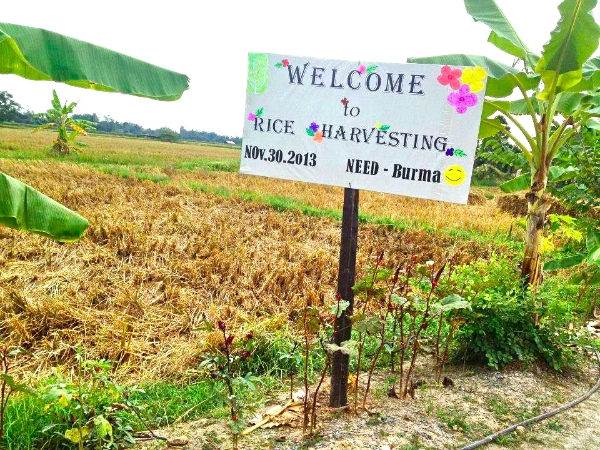 Sickles in hand (umm I may have had to google the world for sickle, and my search may have read: “rice harvesting tools”) we were ready! I think we did a pretty good job. I mean, all the rice got harvested, and I was standing on the side taking photos for only about half of it (blogging is important!). Though sorry for the low quality on some of these photos, guys. A few of them might have been taken with my friend’s iPhone and stolen off of Facebook (DANIELLE, I MISS YOUR CAMERA!). 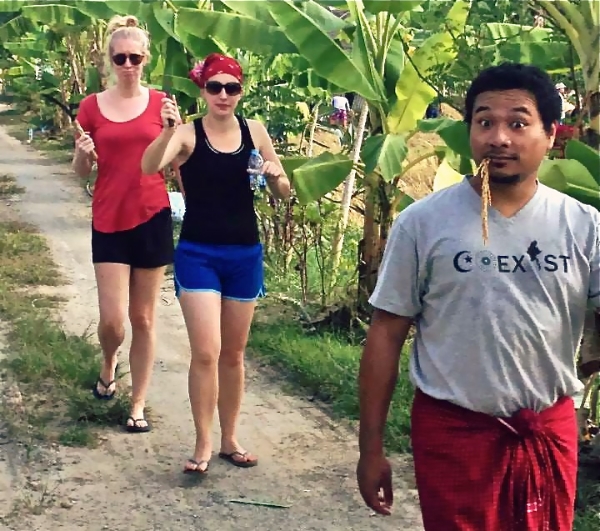 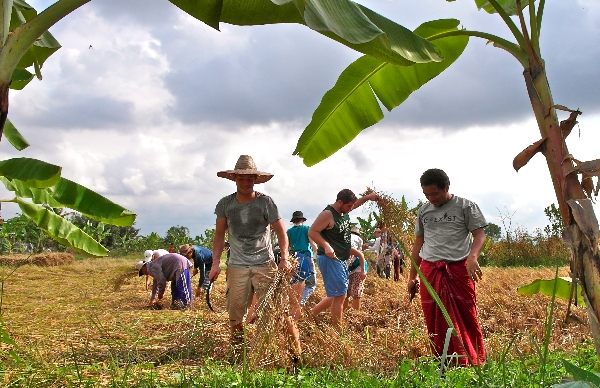 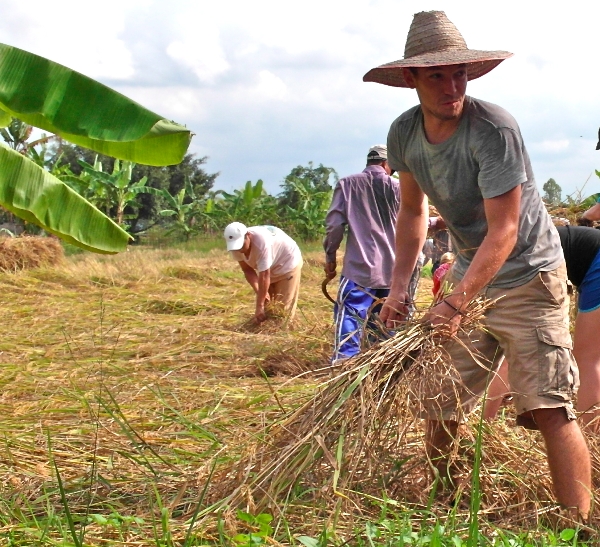 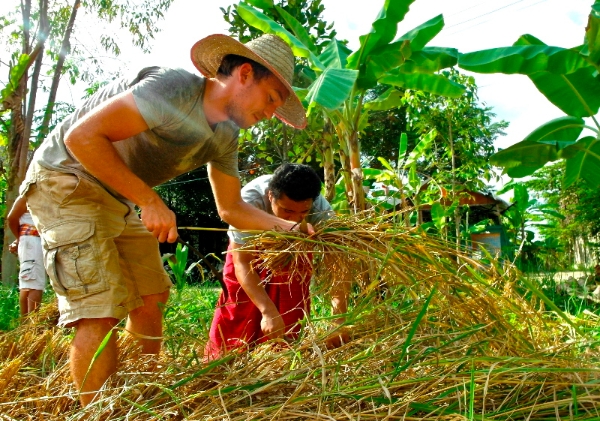 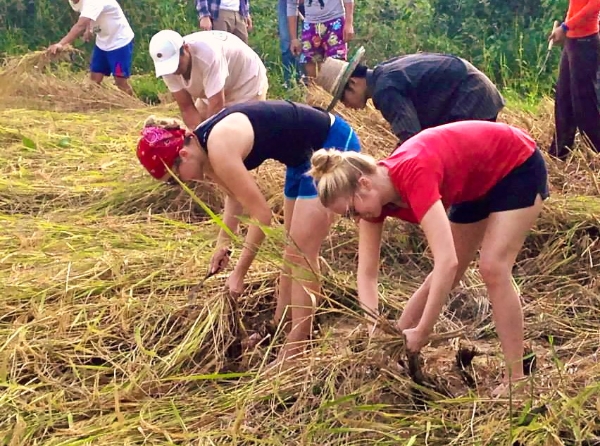 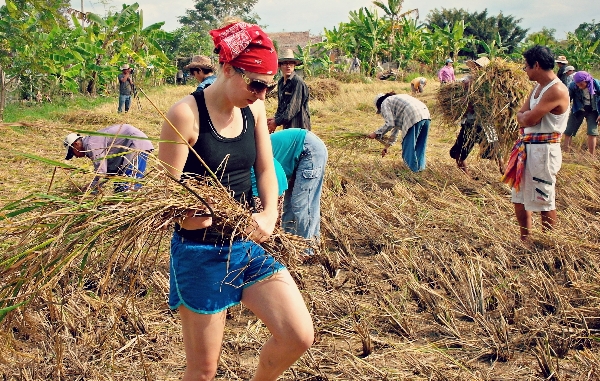 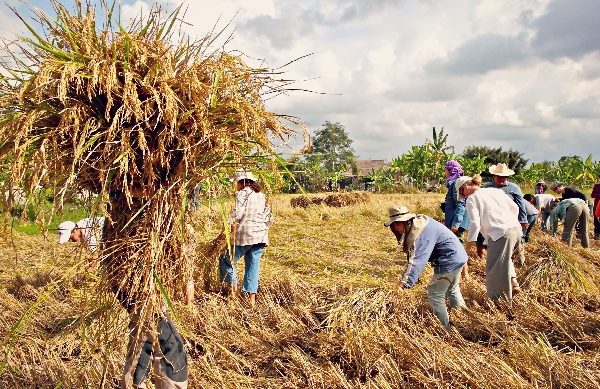 Another great thing about being back in Chiang Mai was that Alicia, one of my bestest friends in the world had recently dragged her boyfriend across oceans to move there! Which means I may be returning to Chiang Mai for a couple of months after spending the Christmas holidays in the U.S. and Europe, because having spent so many years abroad it’s pretty amazing to finally be in the same place as an old friend again. Also, I don’t know why I said I may be returning – I booked the ticket and will be back January 24th! Because I love Alicia that much! Or something less mushy and gross…

For those who know us, NO we did not spend our entire time together lying on Alicia’s bed watching “Everwood” and eating cookies, gosh. Don’t get me wrong, that’s probably what I would have chosen to do, were Alicia not an incredible workaholic (I met her at Williams, shocker) sharing my interest in Burma. Instead, we volunteered together on the We women foundation‘s Emerging Women of Burma campaign, which is raising money to support the work of female leaders in Burma. It’s an exciting campaign because the money is going to help some pretty inspiring women and their projects.

You can visit the campaign page here and read all about the women and their work or, if you’re feeling in the holiday spirit, go directly to the donation page here. At the very least, check out this trailer for Emerging Women‘s upcoming documentary. It’s a good one!

One thought on “The Harvest”