8 January, 2014By DaniellePosted in Myanmar

I enjoyed everything that I did in Myanmar, but the real highlight of my trip was the three-day motorbike trek that I did in Northern Shan State.  If I had just done the trek and nothing else, I still would have left the country feeling satisfied.  After working with Shan Youth Power in Chiang Mai, I couldn’t wait to visit the homeland of my coworkers and friends.  Plus, Shan food is really, really, mouth-wateringly delicious, especially the noodles! 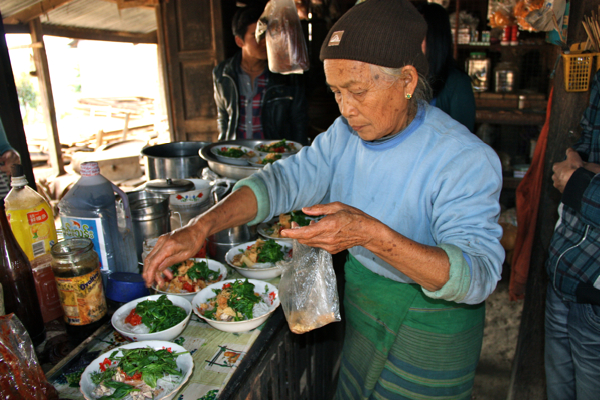 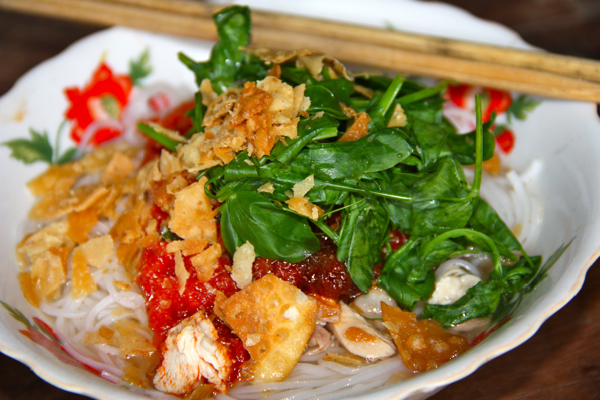 While most people choose Hsipaw (see-pah) as their base when trekking in Shan State, I decided to start my trek in Kyaukme (shah-mey), in an effort to get off of the beaten path and because a friend of mine  had a great experience in that area and recommended a guide named Joy (who I should mention, that despite the name, is a dude).  Joy is fluent in English, Burmese, Mandarin and Shan, and is a great resource for those wanting insight into Myanmar, especially from the perspective of a young person.   Also,  many people in the villages don’t speak Burmese, so having a native Shan speaker with you is a big plus.  When I initially contacted Joy, I thought I would be doing the trek alone.  By the time the trek started we a multi-cultural group of six: a German, a Norwegian, an Irish, a Japanese-American, a Chinese-Australian and myself.

We took a six-hour bus from Mandalay and checked into the Ar Yone Oo Guesthouse.   The Ar Yone Oo Guesthouse is pretty gross, but it’s the only place in town that has a license to accept foreigners, and in a shocking turn of events (not) it ended up being owned by the mayor!  Who has made it impossible for other hotels to accept foreigners!  One of the unfortunate realities of traveling in Myanmar is that as hard as you try to not give any money to the government, sometimes it’s impossible to avoid.  Some people abstain from Myanmar entirely so as not to put money into the pockets of corrupt officials.

Once we were settled, we met Joy at a nearby restaurant and poured over a map, trying to decide which route we want to take.  There were restrictions.

Yep, we were in Myanmar!

[box] While Myanmar is quickly becoming an “it” destination and making its way onto everyone’s travel itinerary , it’s important to know that while the government has made some positive changes (maybe?), there are several ongoing issues that tend to go undiscussed and unknown, even among travelers within the country. In Myanmar there are seven ethnic minority states: Mon State, Chin State, Rakhine State, Karen State, Kayan State, Shan State and Kachin State. There is active civil war going on in Kachin State, Shan State and Karen State, and there is serious Muslim/Buddhist sectarian violence occurring in Rakhine State.  So serious I might add, that it has been called genocide before. Oh, and the government is totally corrupt. (But then again can you name one that isn’t?)[/box]

As we waited for our meals — soup with chicken — Joy reminded us that food poisoning is rampant among travelers.

“You know the meat, they don’t like kill the animals.  They wait for them to die of flu or something and then cook them.  It’s ok for us but not for you guys.  Tourists always get sick.”

We all looked at each other with wide eyes and vowed to eat vegetarian from then on.  (Ironically I broke my vow to get fish with Joy at his favorite restaurant and…..yep, got food poisoning!)

We eventually agreed on a route that would combine motorbike riding and trekking.  While it’s possible to just do trekking, we wanted to be able to visit more remote villages.  Plus, I was running out of time to learn how to ride a motor bike, and what better place to learn than on the mountainous, unpaved roads of Myanmar?  And with a manuel bike (which I never, ever shifted out of third gear).

The trip was ah-mazing.  If you’re in Myanmar, I can’t recommend it enough.   First of all, not only did I learn how to ride a motorbike, but I was basically the only one in my group who didn’t have an accident (I was also going a good 10-20 kilometers slower than everyone, but still). 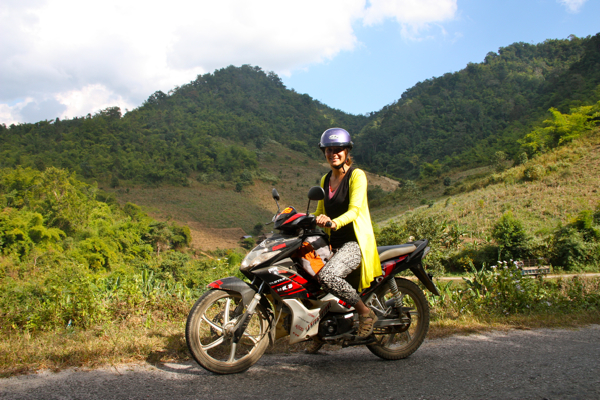 The people were SO welcoming and  friendly.   I hadn’t experienced that type of hospitality since Central Asia.  People actually wanted to talk to us.  They were excited to see us.  Kind of a rarity in the rest of  heavily traveled Southeast Asia. People even wanted to help us when they saw us struggling up mountains and through the jungle.  Like this young monk who tried to give Adam a ride.

Unfortunately the weight distribution thing was kind of  an issue, and they both ended up on the ground. 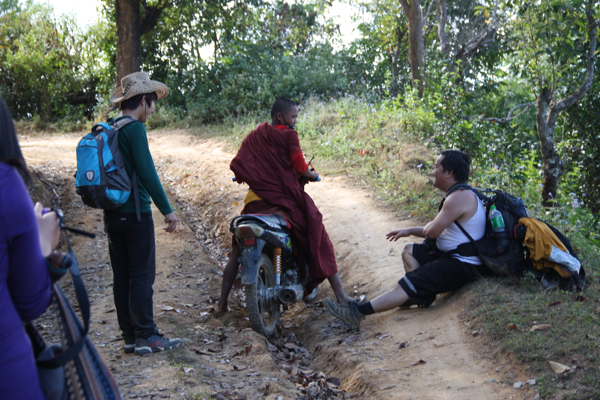 We also ran into a group of rebel soldiers one night in the village where we were staying.  Even they were super friendly!   The next day we chatted with them and they served us tea.  They were all totally casual (and we tried our best to be) about the fact that they were carrying bazookas and AK-47s.  Like, whatever, right? 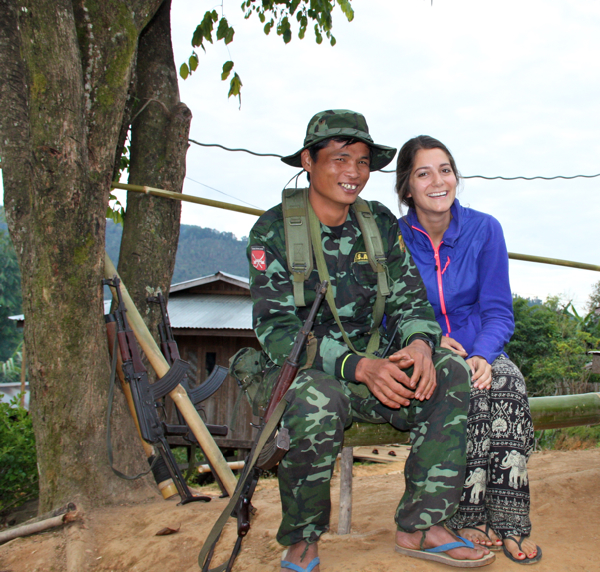 So many friendly faces. 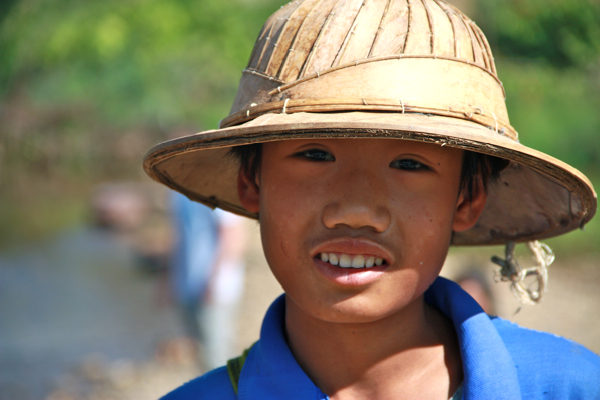 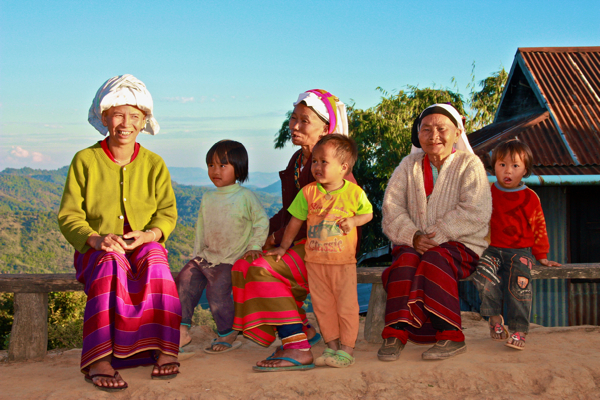 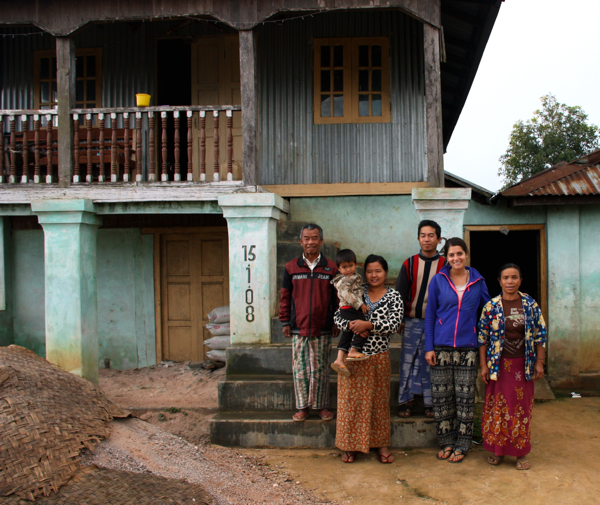 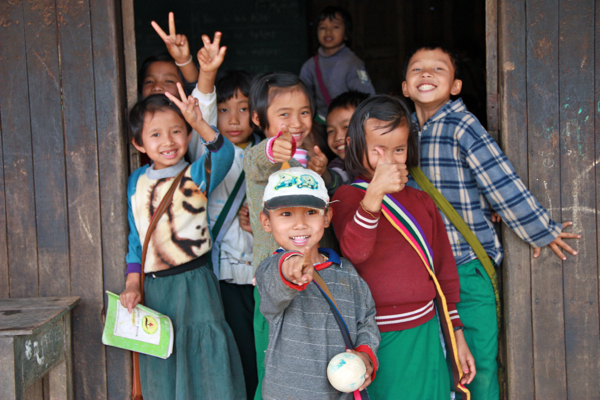 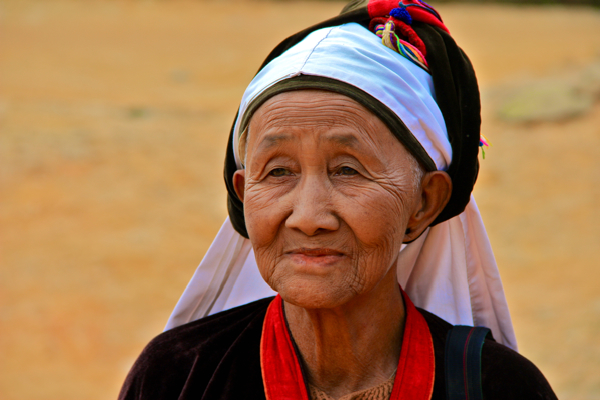 The scenery was stunning.  Breathtaking.  Beautiful. 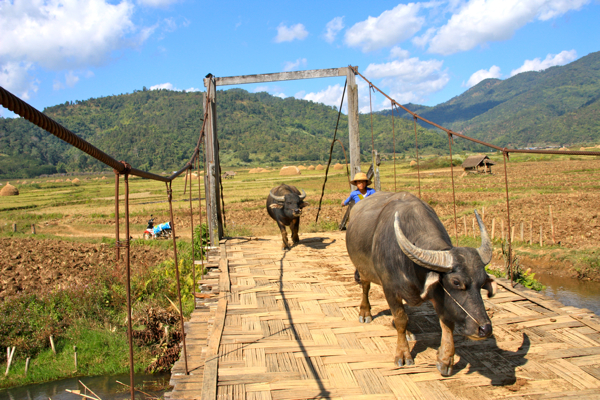 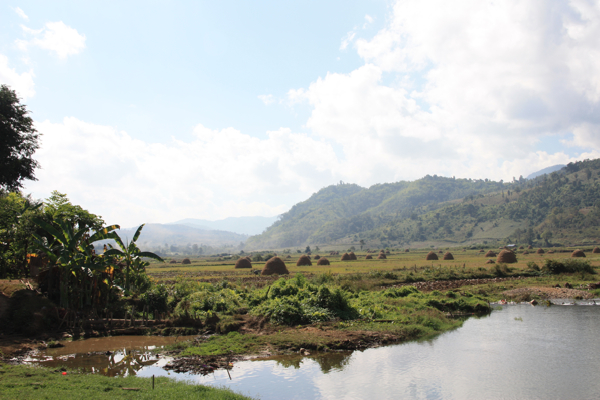 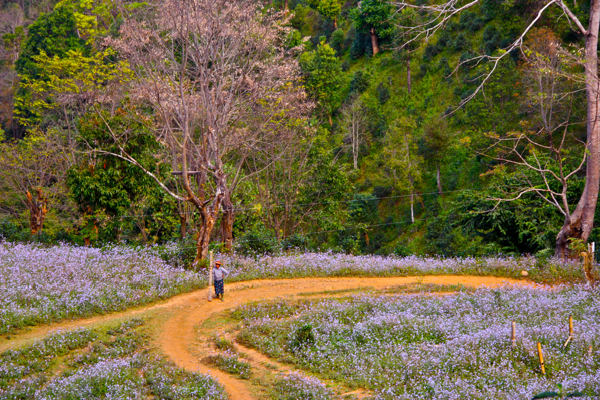 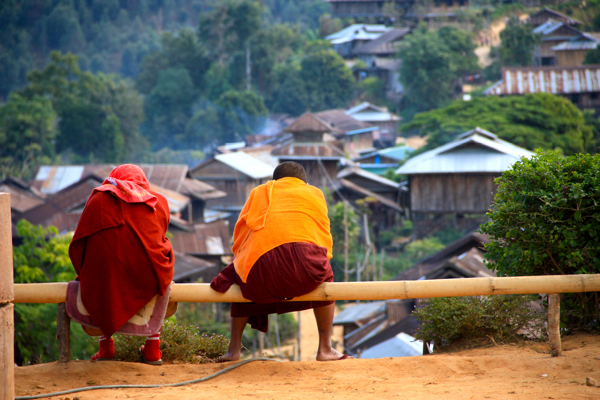 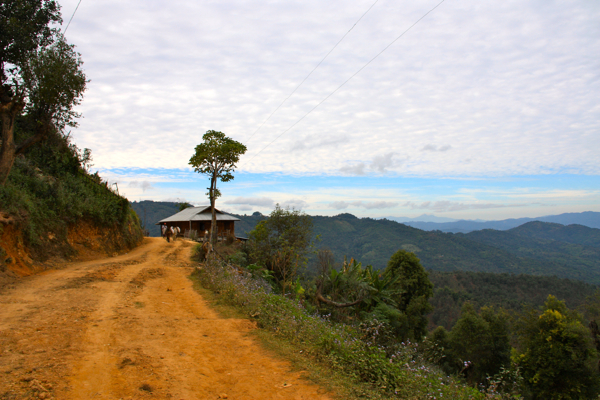 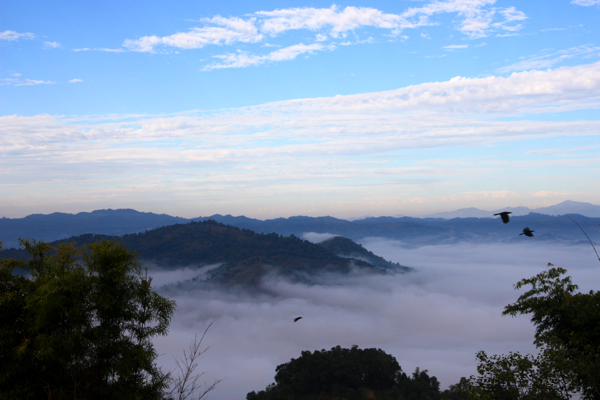 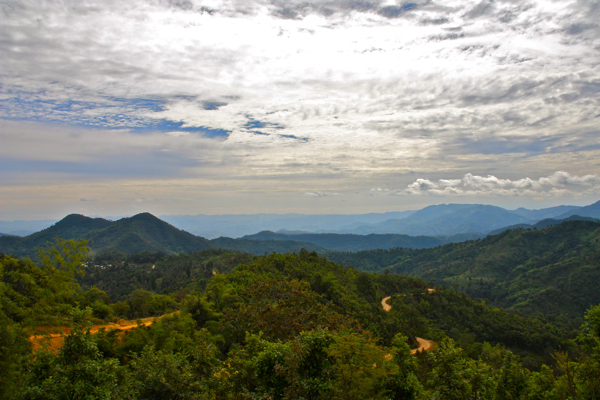 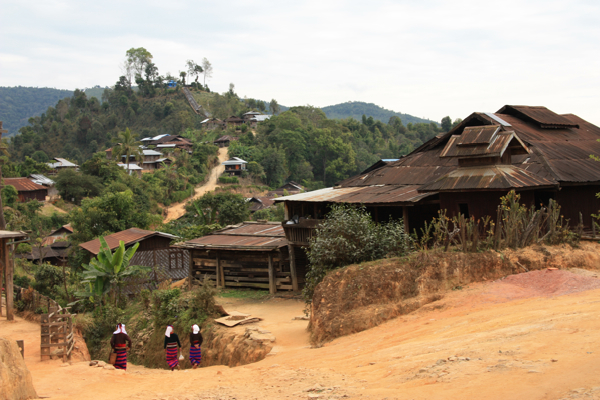 And this guy’s shirt sums up my feelings pretty accurately: 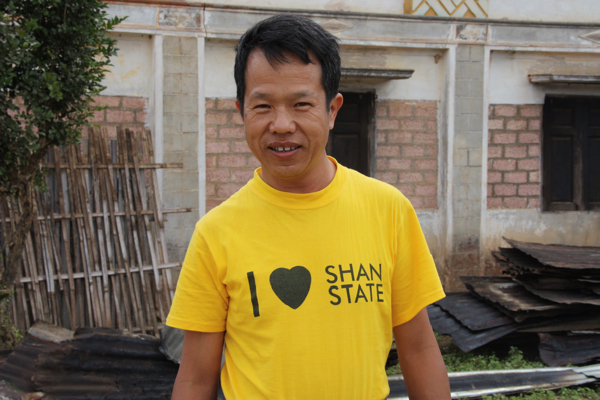 Trekking (which includes room+board) is $25/day for one person, $15/day for three or more, or $10/day for six or more. Motorbikes are an additional $14/day. This seemed expensive to me, and while I still think it could have been cheaper, the motorbikes get beat up going over the steep, unpaved roads. Contact Joy for more info (and tell him Danielle says hi)! 09-403-706-076  or joy.inmyanmar@gmail.com [/box]