Venturing Outside of Chiang Mai: Thai Cowboys and Placenta Curry

21 January, 2014By DaniellePosted in Thailand

After weeks of talking about it, my friends and I finally managed to coordinate a trip to the Sanpatong Saturday Buffalo Market.  Despite its name, the market sells everything under the sun – cattle, roosters, clothes, motorcycles, chilis, machetes and so on.  Yep, you gotta love Asia.

We left Chiang Mai early in an attempt to beat the scorching noon sun.  At 6 am the city seemed like  a totally different place.  The usual chaos was replaced by barefoot monks peacefully collecting their daily alms.

After driving for about 40 minutes we reached our destination.  Despite our early arrival, the market was already in full swing.  And judging by the attention our group was receiving, I think farang visitors are rare, and for that we were grateful.  I feel that many places in Thailand are so oversaturated  with tourists that they completely lose their authenticity .

We waded through a sea of cattle, admiring the weathered and story-filled faces of Thai cowboys, taking pictures, making friends and trying to avoid stepping in the many piles of animal shit.

Around 9, we decided that it was time for our much anticipated breakfast: water buffalo tartare drizzled with stomach bile and placenta curry.  Both were surprisingly good, although I’m glad I didn’t see the placenta cooking until I was finished (see below).  After breakfast we toasted with 15 cent shots of clear whiskey and homemade bitters, because really, what better way to wash down such modern cuisine.

It’s easy to go to Chiang Mai and never leave the old city.  The buffalo market is easily accessible by motorbike or songthaew and I highly recommend it! 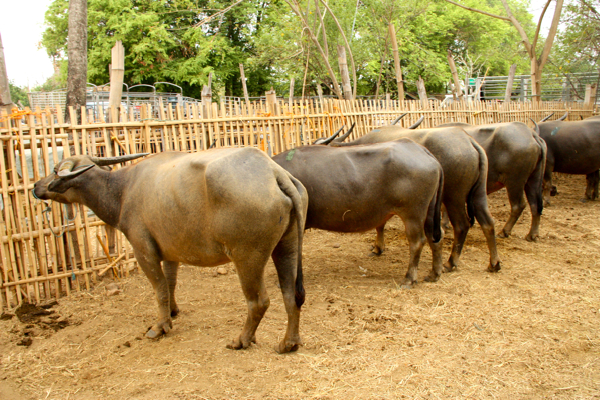 I originally published this post June, 3, 2013 on a personal blog that I kept while volunteering.  While I take a brief hiatus from traveling and lay low in my hometown of Cleveland, I’m going to repost some of those old blogs so as not to bore you guys with tales of home, where my life pretty much consists of sleeping in and eating Chipotle.