1 July, 2013By The Roaming CoconutsPosted in Kazakhstan, Thailand

Well, not quite yet. More like sometime between August 15th and October 15th, according to our brand new KAZAKH VISAS!! 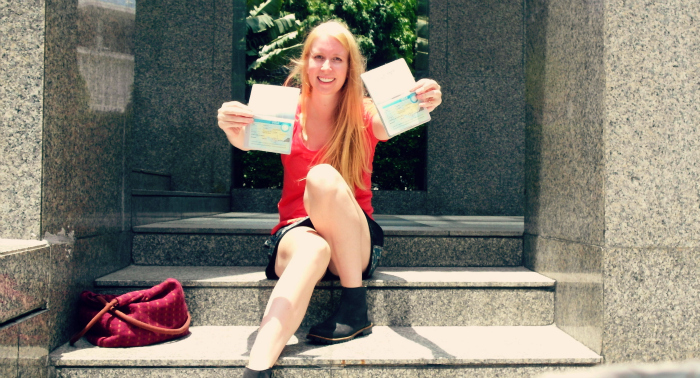 So much excitement, because it has been such an ordeal, especially as we were actually trying to get visas for Russia, not Kazakhstan. But when Danielle went to the Russian embassy in Bangkok a couple of weeks ago she was turned away, because she needed to have a visa for the country she would leave Russia for. They explained that they otherwise couldn’t be certain that she would actually go to get the Kazakh visa (it’s okay, Russia, trust is hard).

A few panicked Facebook messages and Google searches later, Danielle hopped on a motorbike taxi to race across town to the Kazakh embassy, with less than an hour before it closed. Luckily, Kazakhs are apparently the nicest. People. Ever. So nice. The consul helped her fill out all of the documents she didn’t have, and even agreed to let me pay for the visas and pick up our passports a week later, when I would be in Bangkok and Danielle would be back in Chiang Mai with her mom who was visiting.

Usually a visa takes five working days to process, but I asked nicely and the embassy agreed to do it in three days. Again, we love Kazakhstan. So I went to Bangkok Bank’s head office on Silom Road to make two payments of USD 160, dropped off my application papers and Danielle and my latest bank statements (they were concerned we don’t have any money since we’re volunteers) and returned a few days later to pick up our visas.

But when I entered the office, our kind consul was nowhere to be seen, with a woman sitting at his desk. I explained that I was there to pick up two visas, to which she responded, “where is your power of attorney letter? ”
“Um.”
“Without the letter, it is impossible to receive your friend’s passport.”
“But when-”
“Please have a seat.” And she disappeared into a back room leaving me a twitchy mess, trying to convince myself that really, Danielle wouldn’t be sooo upset about having no passport, even if we were leaving for Indonesia the next day. She could… book another flight? Try flying with my U.S. passport while I used my Norwegian one? I mean, all white girls look pretty much the same anyway, right? And… have the same name.

But then our favorite consul poked his head in the office and held up our two passports with a big smile. I think I fell in love.

So we’re off! To Indonesia. Tomorrow. With our passports. Yes!

7 thoughts on “We’re Going to Kazakhstan!”