9 November, 2013By The Roaming CoconutsPosted in China

I have strangely few memories from my early childhood (sorry Mom and Dad). One of my most prominent is from a family vacation to the Bahamas when I was in first grade. One night we went to a concert, where a seemingly obese man got on stage for a rendition of “I’m Too Sexy” while he shed many layers of clothing, ending the song quite thin, donning nothing but a speedo. In Western China, Silvia and I pretty much resemble the man at the beginning of the song, as we are wearing practically every article of clothing we have. I’m even wearing socks with my Keens. Yes, socks with my Keens. I know, it should be criminal, but it’s that cold. 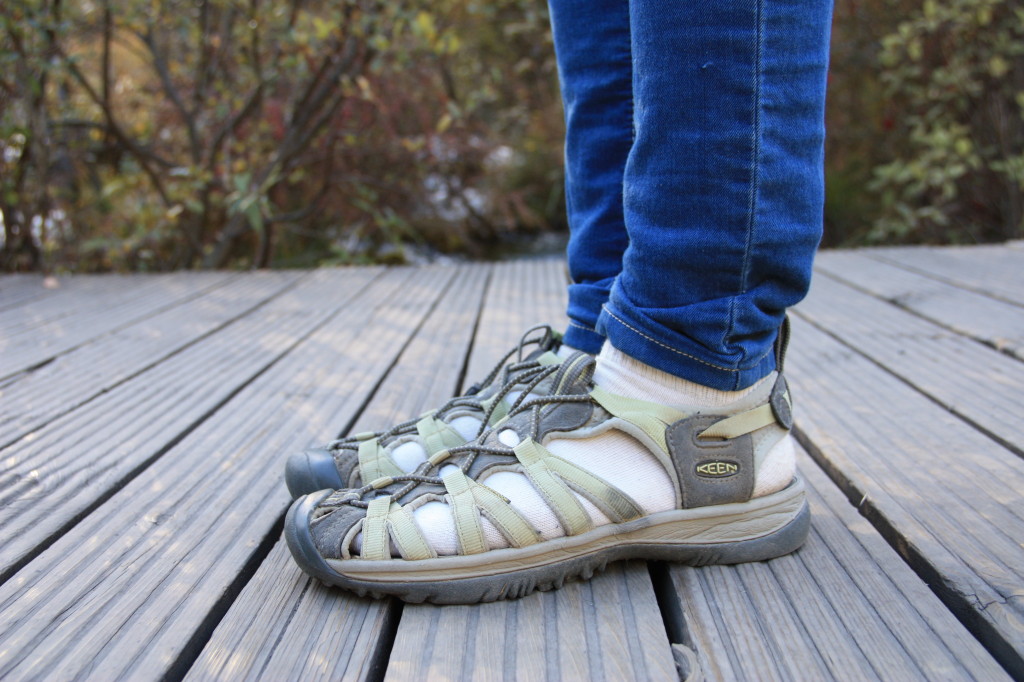 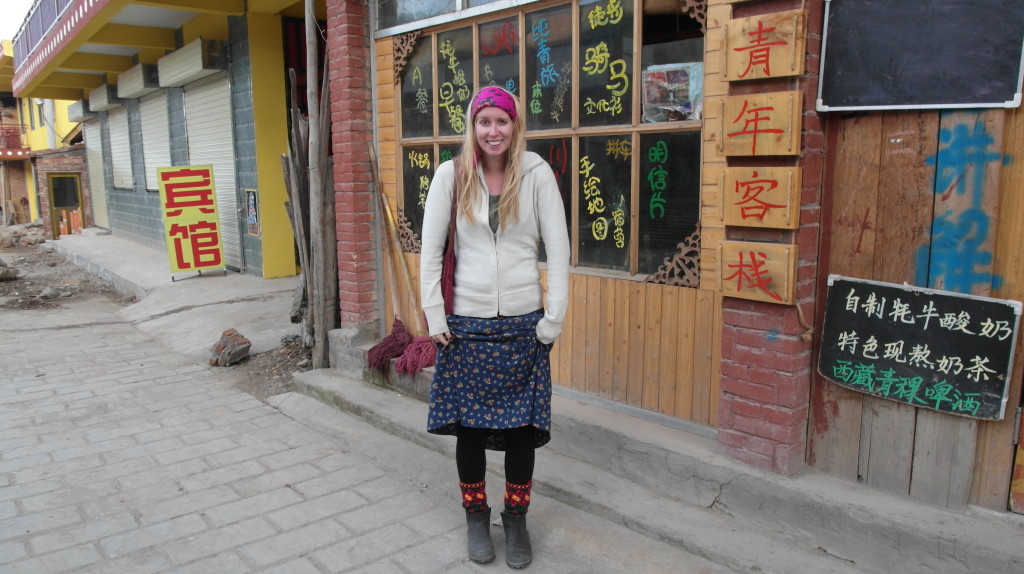 We clearly didn’t do our research, or we would have known that this region, with an average altitude of 3,000 meters (9,842 feet), gets really cold. The snowcapped mountains rival those of Vermont and maybe even Norway (Silvia?)—and it’s everything that doesn’t come to mind when you think of China (pollution, concrete jungles etc.), but that doesn’t make it any easier to get out of bed in the morning when you can SEE YOUR BREATH!

Western China is unique not only in its natural beauty, but in its culture as well. Its proximity to Tibet and many Tibetan residents have heavily influenced the region. You can’t go more than a hundred meters without seeing a strip of colorful prayer flags blowing in the wind.

Yaks might just outnumber people (okay maybe not, I don’t know if anything outnumbers people in China). But there are many yaks and many delicious yak dishes to be eaten. 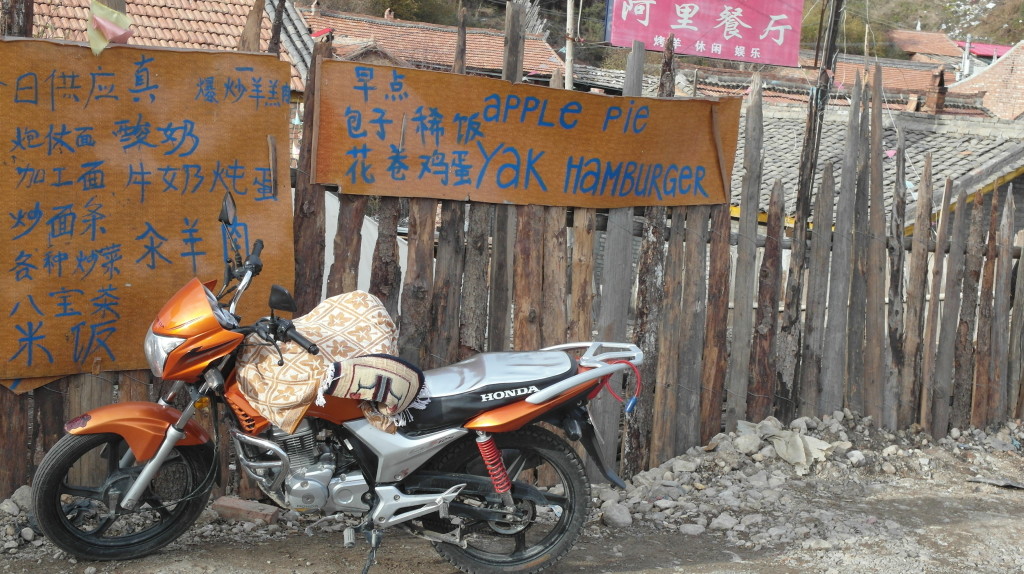 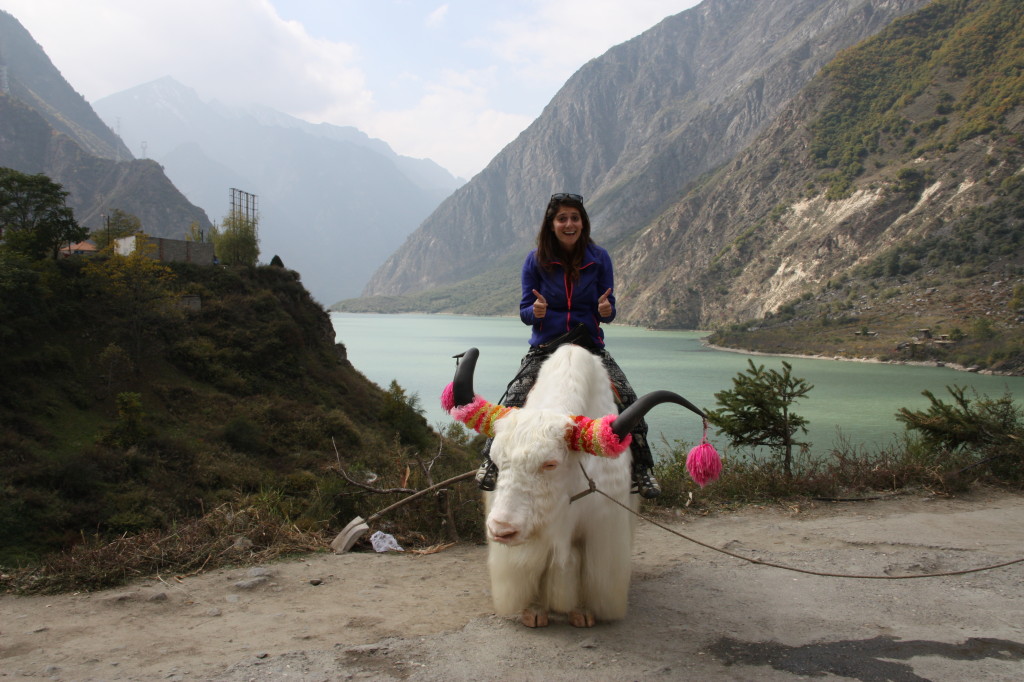 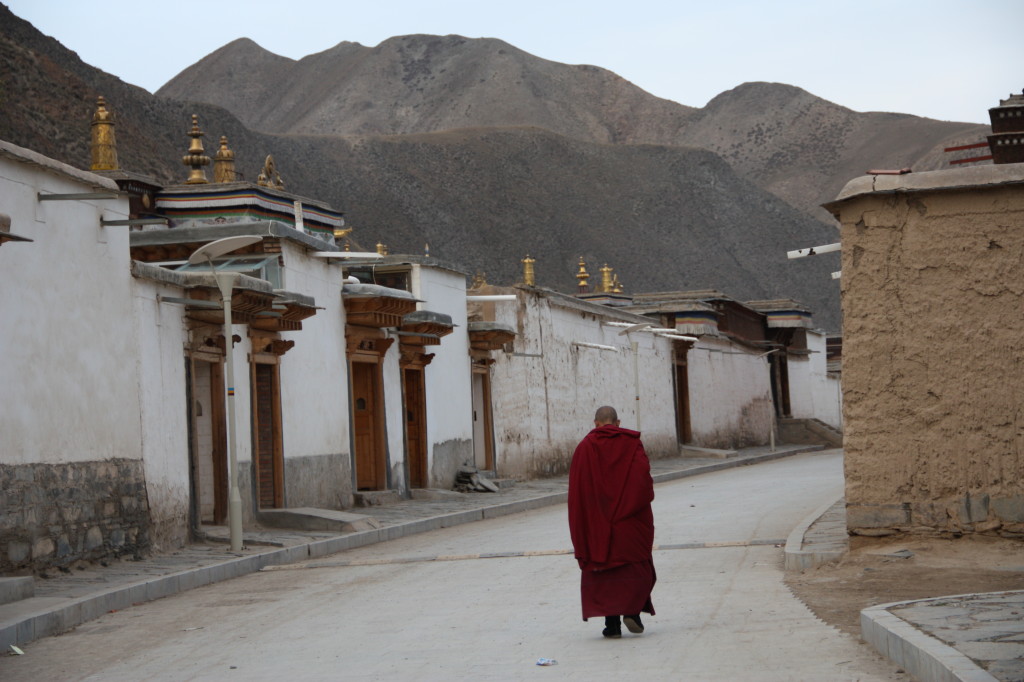 We started in Lanzhou, though we only spent a night there so don’t have much to report about the city. We stayed at Huar Youth Hostel, which had comfortable beds but was freezing at night. Also, there was no one at the front desk when we checked out around 7:45 am, so we sadly lost our deposit. Or so we thought, until we arrived at a small Tibetan town many days later and the receptionist at our hostel asked if one of us was named Lawrence. Apparently the Lanzhou hostel staff had sent out word to their network that we were owed money, and the receptionist happily paid us. We were stunned!

After Lanzhou we headed down to Xiahe, home to the massive Labrang Monastery. 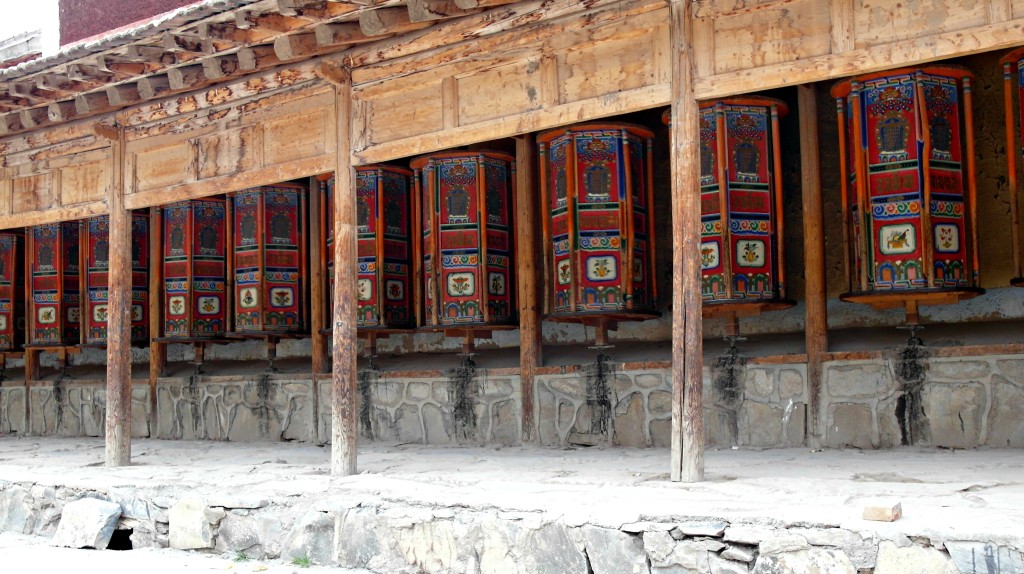 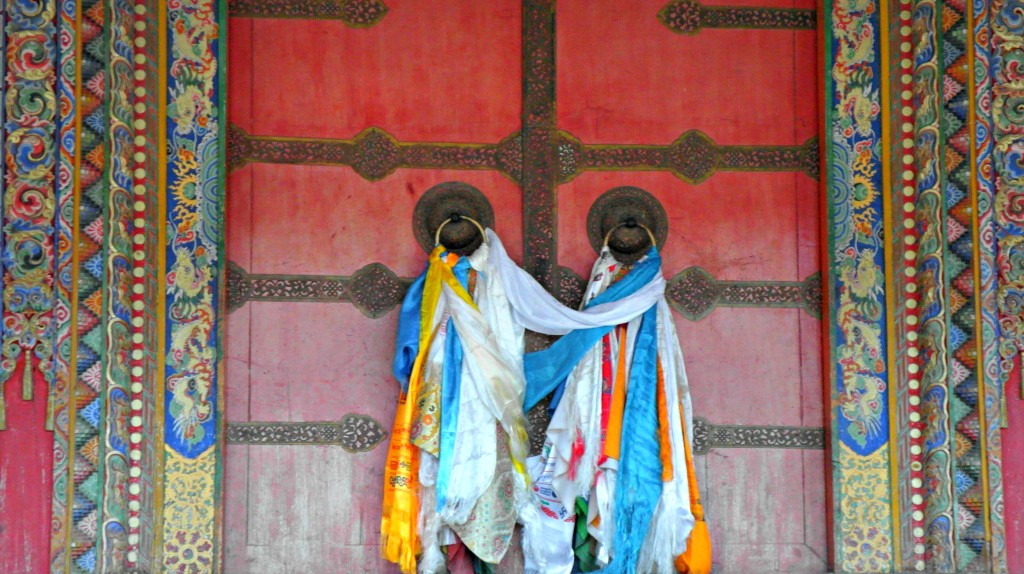 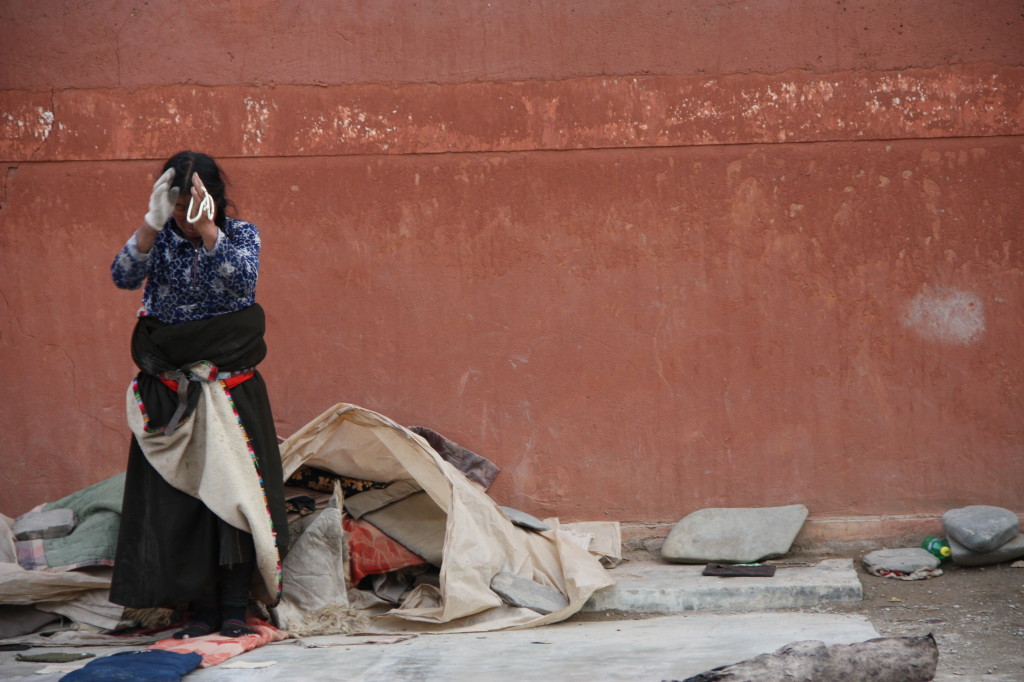 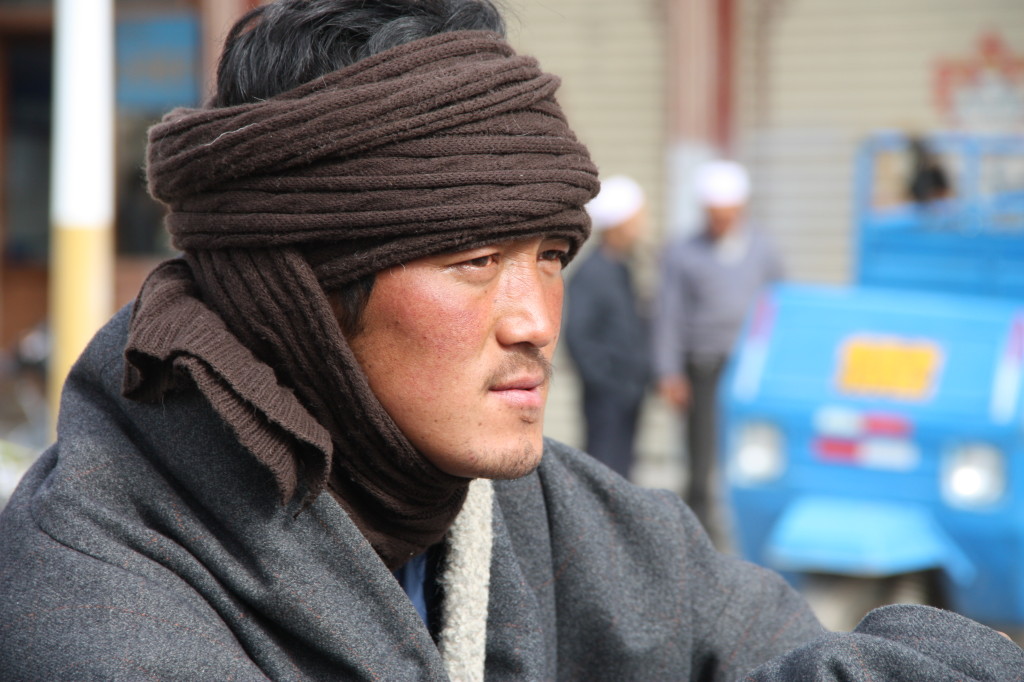 There was also an incredibly cute bear living outside of the temple.  If you’re feeling brave you can get pretty close. 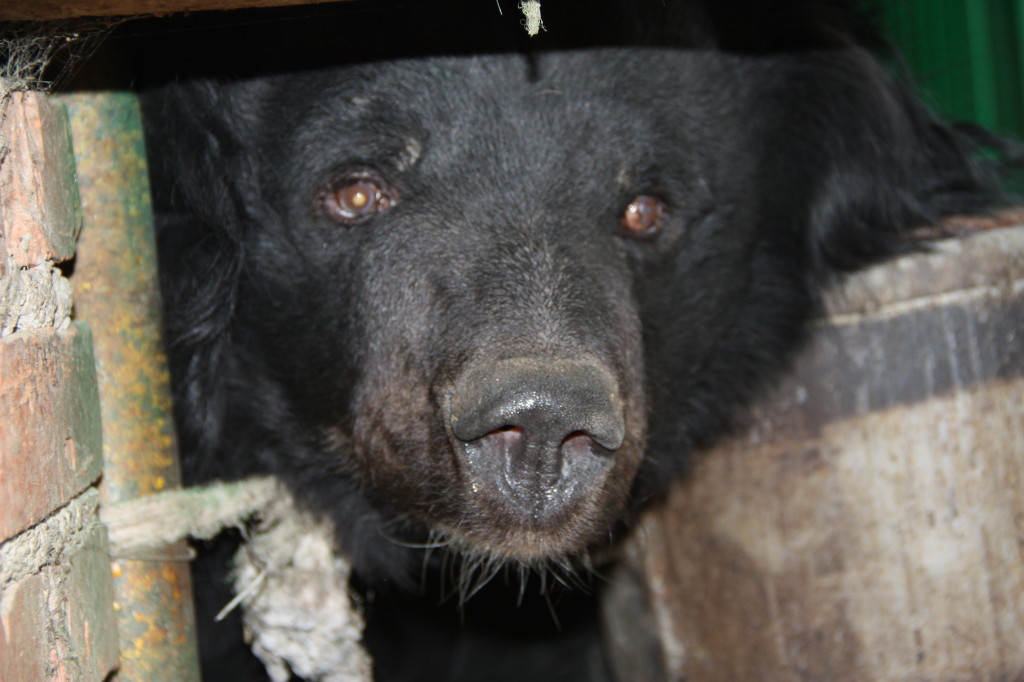 Next we went to Langmusi, a charming (and freezing!) Tibetan town, where we hung out with a large group of friendly Chinese tourists and ate some seriously mouth-watering food. 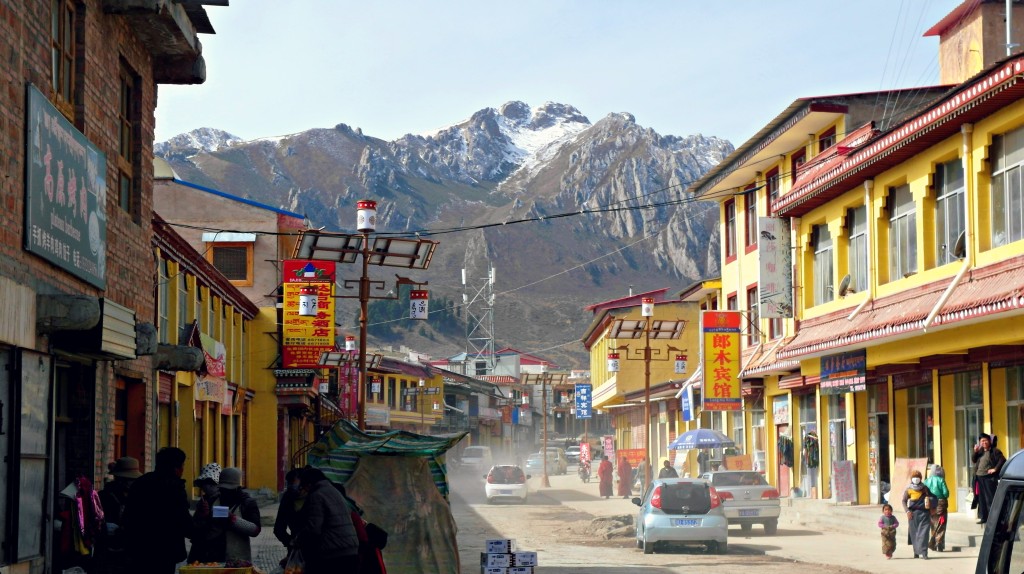 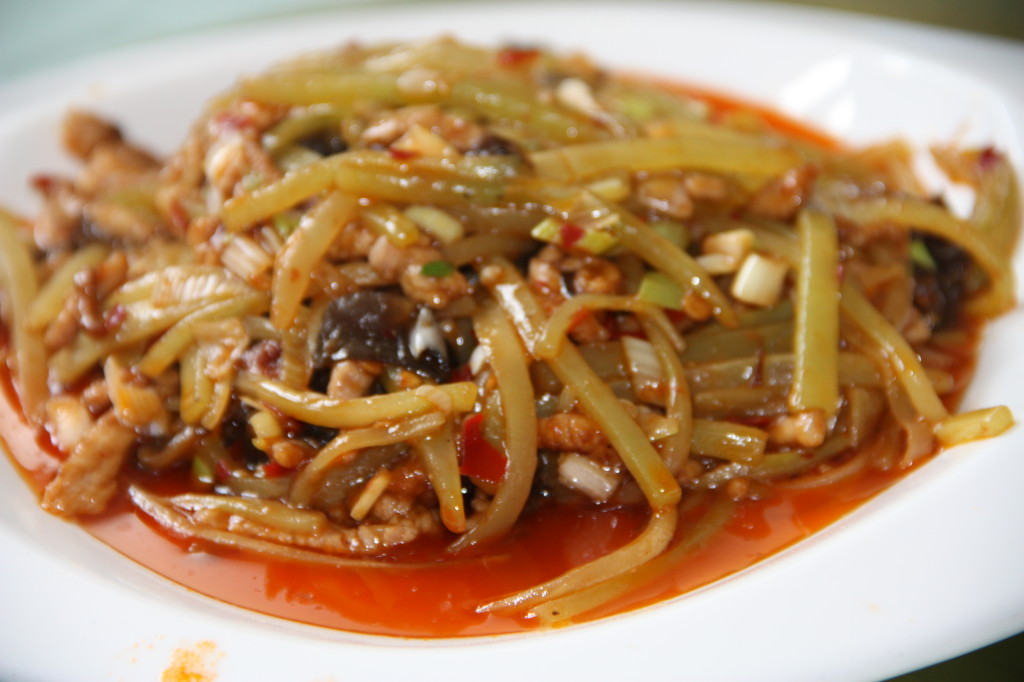 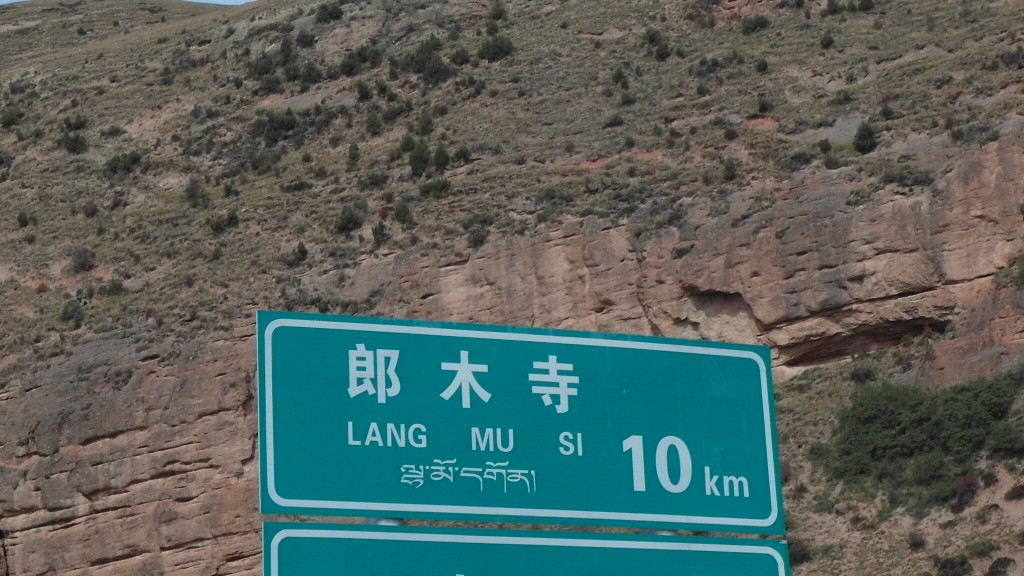 Silvia was excited to see street signs translated into Tibetan.

We were hitchhiking towards Jiuzhaigou Valley National Park and not making terribly impressive time, so we also spent a night in Chuanzhusi, another small Tibetan town with little much to see. But the Tibetan owners of our hostel were incredibly hospitable, sharing their family dinner with us and generally making Chuanzhusi a well worth stop for us.

We hadn’t really planned to spend so much time in Tibetan areas of China—we didn’t have the time or means to actually go into Tibet—but it ended up being a great experience. However, the situation for the people there is also not ideal. Silvia, who spent a semester abroad in both Dharamsala, India and Nepal doing a Tibetan studies program can elaborate.

Being back amongst Tibetan prayer flags and people doing kora around temples brought me a sense of familiarity long missed on our adventures in Central Asia. If not quite reminding me of home, at least it was like a place I had lived. So nice.

Or… not. No, of coure it was nice to see Tibetans again and practice my Tibetan hellos and how are you?s, and it was interesting to see the side of Tibetan culture in China, rather than refugee communities in India or Nepal. But, to be perfectly honest, it was also a little depressing.

My Tibetan host family in Dharamsala had left their comfortable homes and jobs in Tibet to move to a refugee camp in order to be closer to the Dalai Lama. And my Tibetan friends in Nepal all had stories, either their own or from their parents, of the arduous escape from Tibet over the Himalayas, hiking through waist-deep snow and surviving off a sack of Tsampa (basically like dry flour). The journey wasn’t easy, but it was worth it for them to be able to leave the oppressive Chinese government and practice their religion and culture freely (as refugees). They vowed not to return to their homes until Tibet attained independence, something they were all confident would be coming soon.

“Tibetan independence is impossible,” Will, a Chinese backpacker we met in Xiahe, told me. We had been traveling together for several days near the Tibetan Autonomous Region, and I was curious to hear his take on the situation in Tibet.

“A while ago, when Taiwan was talking about independence, the government finally made a law. It says that if you want to break from China, we are not afraid of war.”

“You told me that the Chinese government takes very good care of Tibetans, often giving them more money and support than other parts of China. So why do you think many Tibetans have left China to live as refugees in other countries?” I asked him.

“Yes, they have very good conditions here, and most are grateful,” Will replied. “You can see many fly Chinese flags over their homes. They are proud to be Chinese. Only some, they leave to follow their leader, the Dalai Lama.”

“The Dalai Lama is greatly respected around the world. Do you think he is a good leader?”

“As a loyal Chinese citizen, I don’t support the actions of the Dalai Lama,” Will said. “Actually, I think he is a bad man. He just wants power, to be the leader of a country, not a region in China. But his decisions are very bad for Tibetans. For example, he encourages monks to burn themselves. Do you remember the monk riots in Tibet in 2008? They were his fault, and many people died.”

“So why do you think the Dalai Lama is so respected in other countries? Why do so many people support Tibetan independence?”

“Of course they do! Unification makes China strong, and it is a threat to the rest of the world. People were happy when the Soviet Union broke up, because it became weaker. But for the people in the Soviet Union, unification was much better. Their lives were better. It is the same for China.”

“But there are many tensions between Tibetan and Chinese people. What impression did you have of Tibetans before you came here?”

“The news does describe Tibetans as sort of wild. Now I see that they are very hospitable, and maybe it would be better if the media showed that. But the news always wants to scare us from leaving our homes,” Will laughed. After a pause he added, “You should be a little careful around Tibetans though, there are stories of them killing Chinese for no reason.”

“What do you think will happen in the future? Will there always be Tibetan refugees living in other countries?” I asked Will.

“I hope that the next Dalai Lama will return to China. He will see that Tibetans are Chinese, and he will want what is best for his people.”

Will and I don’t exactly have the same hopes for Tibet’s future, or see Tibet’s situation in the same way. But I guess Will’s view of the situation matters a whole lot more than mine, at least insofar as it is a reflection of how Tibet is presented in Chinese media and discussed by the Chinese government. Watching Chinese tourists in Western Sichuan come to Tibetan towns, get drunk off local spirits, don sacred prayer scarves and dance around fires as “authentic” experiences of Tibetan culture, I can’t help but think of the sadness Tibetan refugees would feel could they see this. But in a way I can understand Will’s feelings about Tibet. He’s right, their living situations are often better in China than as refugees elsewhere, and in fact many people we met in Central Asia expressed nostalgia for Soviet times, when their small cities received funding from Russia. Then again, comfortable living is no replacement for freedom. If asked to choose between the two, I guess Will’s choice is clear. For Tibetans, for whom this choice is fact of life, I imagine it is a great deal more complicated. 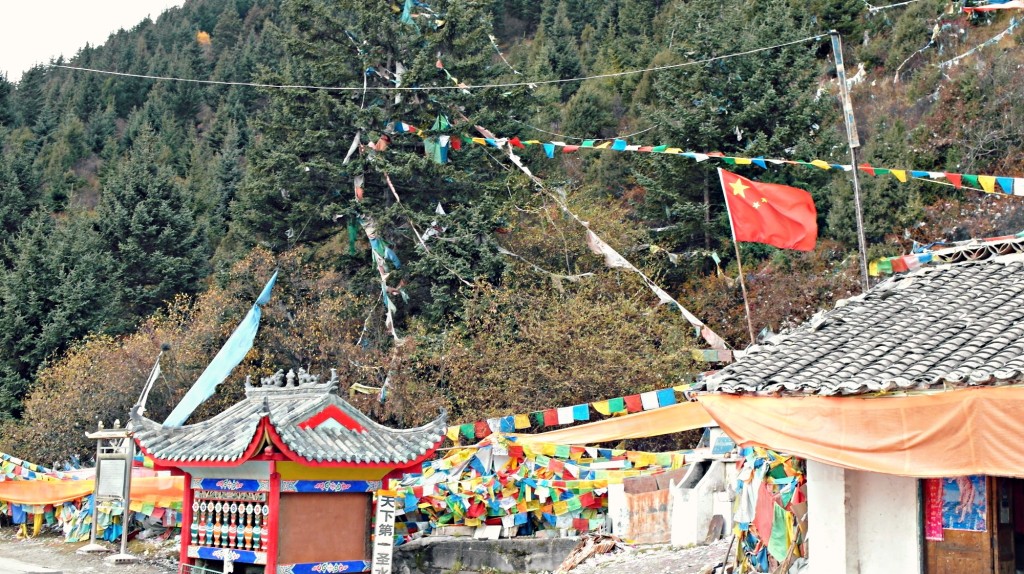