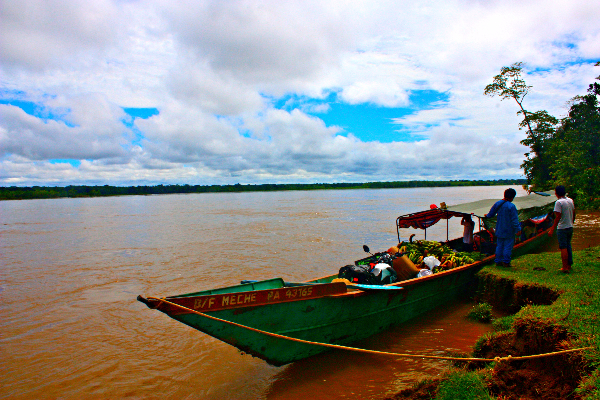 How To Get From Coca, Ecuador To Iquitos, Peru By Boat

6 October, 2015By DaniellePosted in Bolivia

“Truly a once in a lifetime experience…….that I would never do again.” “Too Expensive.” “You will never be able to do it with a motorcycle”

Those are just a few of the encouraging sentiments we encountered while planning our boat trip down the Rio Nape from Coca, Ecuador to Iquitos, Peru. Fun fact about Iquitos: it’s completely surrounded by dense rainforest, making it the world’s largest city that is only accessible by air or water. With J’s motorcycle, taking a flight was out of the question. And where’s the adventure in that? Despite all of the warnings we received, traveling by boat from Coca to Iquitos was surprisingly easy and hassle free.

The first leg of the journey was simple and straightforward. We arrived in Coca the night before we intended to leave and grabbed a room at the slightly shabby yet super conveniently located Oasis Hostel The boat to Rocofuerte leaves daily at 7:30 am, and the dock is just around the corner from Oasis. The ride lasted roughly 8 hours and cost $15 per person and $30 for the motorbike. We stopped once for a lunch/bathroom break. Word to the wise: the boat fills up fast so show up early! Coca is also the last place to withdraw money from an ATM until Iquitos. 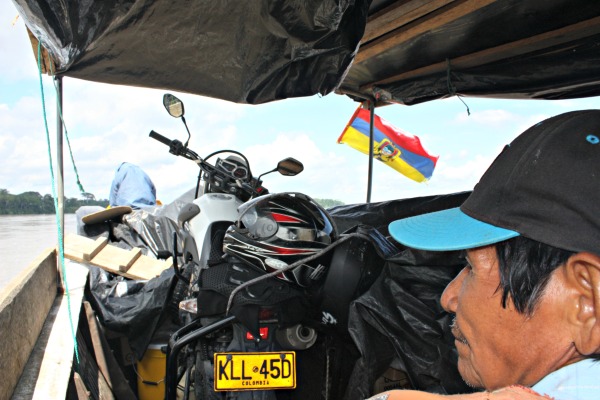 As far as I know, the best and only way to get to get from Rocofuerte to Pantoja is to charter a boat. Luckily we met some other travelers who were looking to do the same, bringing our number to 7. We hired another canoe-like boat to take us and the motorcycle to Pantoja the following morning for $90. Rocofuerte is the last reasonably priced place to stock up on water and snacks.  This is also where you will receive your exit stamp from the Ecuadorian authorities.

It takes just two hours to reach Pantoja from Rocofuerte, and you have officially made it to Peru! The first thing we did was visit immigration where the friendly official gave us 90-day visas. We then checked into the town’s only hostel ($6/person) and began to figure out which boat to take for the longest portion of our journey onwards to Iquitos. I was pretty set on catching one of the legendary slow boats, but nobody in the entire town could tell us when the next one was due to arrive. After hearing numerous stories about travelers being stuck in tiny Pantoja for days on end, we opted for the fast boat. This is a more reliable option as it allegedly arrives every Saturday and departs the following day. At $80 it cost twice as much as the slow boat and only took 2.5 days. It included room and board, but it didn’t take long for me to learn when you’re traveling through the Amazon those words take on slightly different meanings.

Day 1 of our journey was pure bliss. The 7 of us gringos were the only passengers, so our day basically looked like this with a little bit of the local sugarcane brew thrown in for good measure. 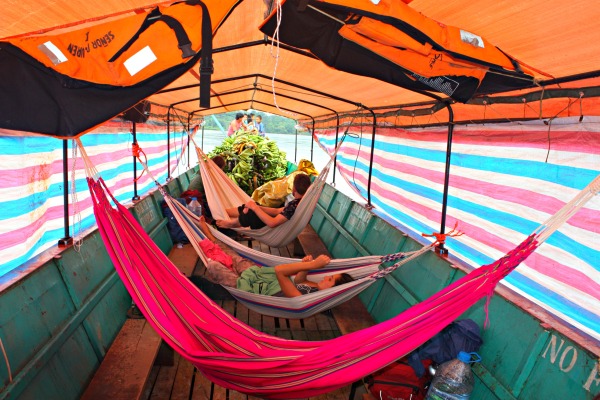 There is something really special and peaceful about seeing the Amazon region by boat, especially one that is small enough for you can get on and off as you please, and interact more with the passengers and crew. 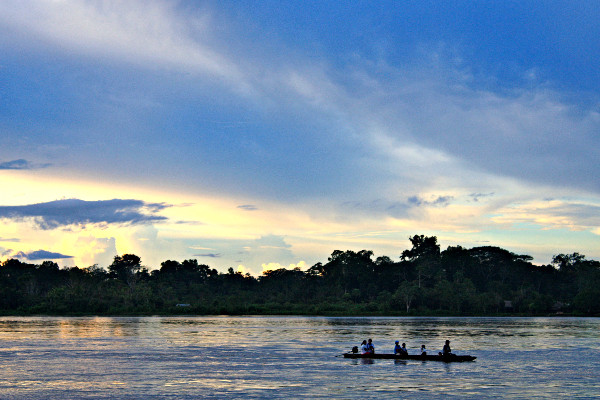 During the journey we stopped at various small villages, the captain buying up anything he could resell for a profit in Iquitos: plantains, bush meat, turtles, and even a live few pigs. 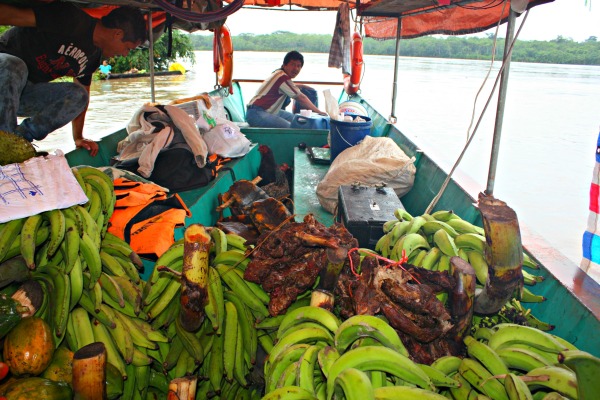 We spent a night in one of these remote villages where we feasted on bush meat and discovered the perils of walking around in a place with not a single toilet. 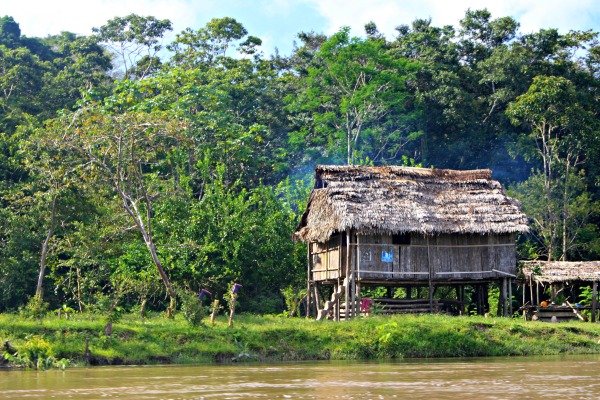 Day 2 brought many more passengers, so we took down our hammocks and resigned ourselves to the hard wooden benches. It would have been a painfully boring 10-hour day, if not for the arrival of a sugar-addicted, soda-guzzling baby monkey named Rosita. 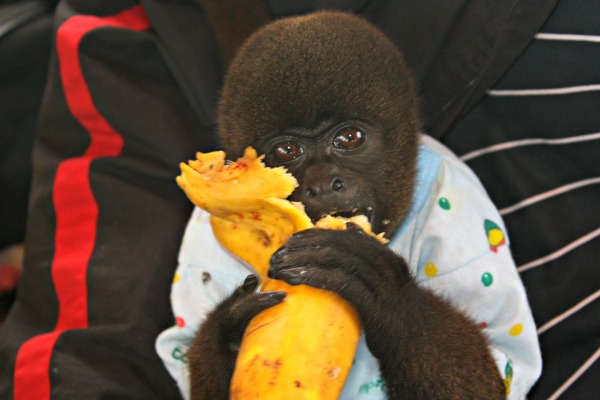 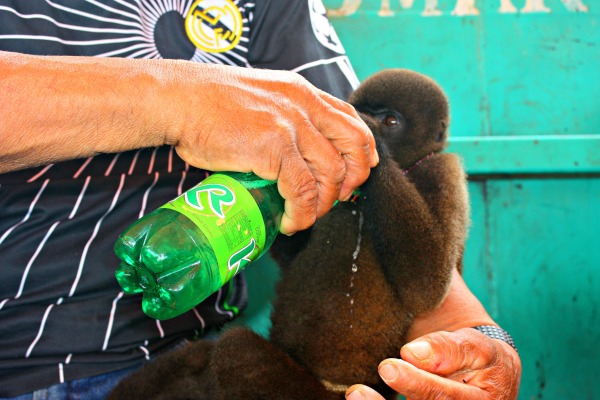 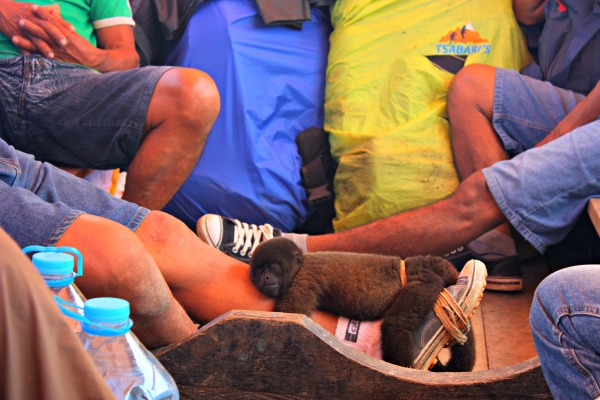 We spent one more night in another picturesque village before reaching out final destination. 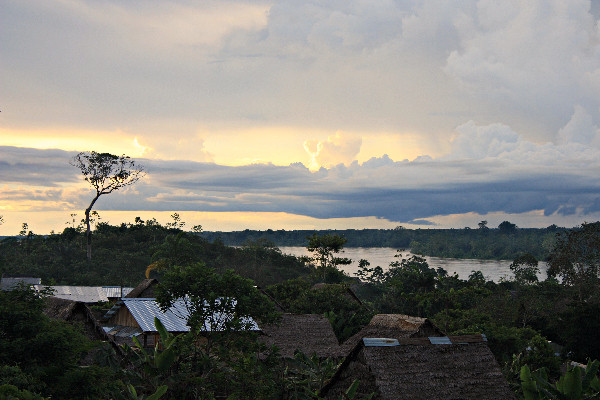 While some boats take you all the way to Iquitos, ours dropped us off in Manas, which is an easy 1-hour ride to Iquitos.

*Not including additional costs such as water, hostels, and of course the motorbike, which ended up costing more than a person in the end.