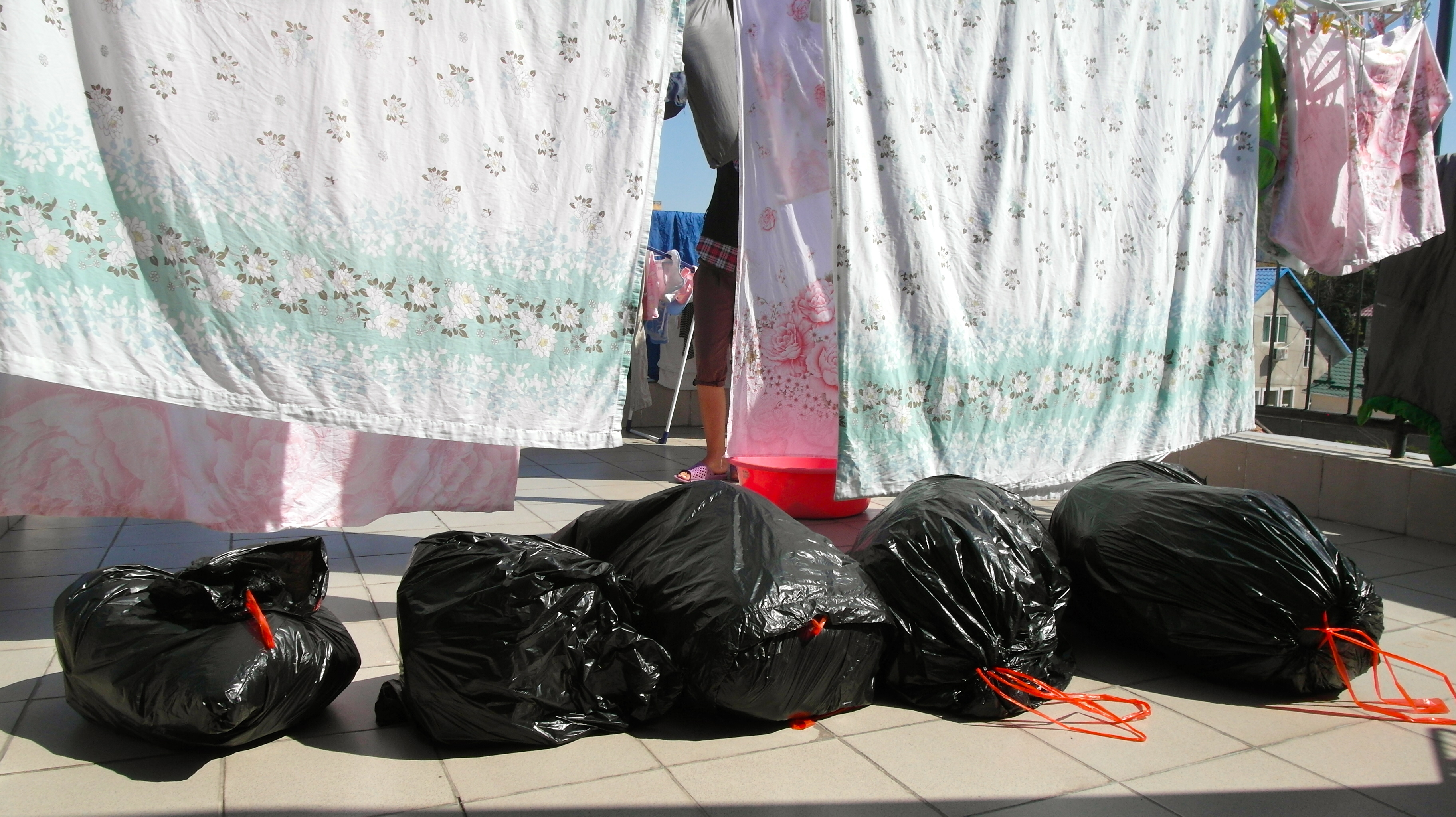 Bedbugs and Border Police in Kazakhstan

19 September, 2013By The Roaming CoconutsPosted in Kazakhstan

Kazakhstan, Kazakhstan, Kazakhstan.  Where to even begin?   I know what your reference point is, and well, this will probably come as a shock, but Borat is pretty inaccurate (no running of the Jews, what?).  In fact, the movie that compelled so many people to attempt to locate Kazakhstan on a map was actually filmed in Romania.  Different continent, different culture, totally different people.  So sneaky you are, Sasha Baron Cohen.

We had originally planned to go to Kazakhstan after Mongolia, continuing a westward loop through Central Asia and back down to China.  Due to the impending winter, we decided reverse our trip and start in Central Asia  (couldn’t miss yurt season!) and ultimately we chose to ax Mongolia entirely.  In Kyrgyzstan we began meeting other travelers and swapping stories, and surprisingly Kazakhstan was always absent from these conversations.  People just didn’t seem to be excited about it — or even to be going there.  But we already had the $160 visa (so expensive, because people are really lining up to go there right?  wrong.) and it put a serious dent in our money belts, so there was no way we weren’t going to put it to use.

Before I continue I should probably disclose that we only spent a week in Kazakhstan, which is an absolutely massive country.  I’m sure there was much more to do and see, and maybe if we had stayed longer I would have loved it.  But from what I experienced I just….didn’t.  It was expensive (well, relatively speaking) but really, my lack of love can be attributed to the fact that we encountered two major #BACKPACKERPROBLEMS.  Before I delve into these issues, I will say that the people of Kazakhstan welcomed us with open arms.  They were incredibly warm, and Silvia, who is the only one of us who can actually communicate with the locals, maintains that they were the friendliest we have encountered thus far.

But all of that is an afterthought, because we got BED BUGS.  I had bed bugs once before in college, so I was already aware they are the worst. thing. ever.  They’re psychologically damaging, cause incredibly itchy and long-lasting bites and are nearly impossible to get rid of, especially without an exterminator.  My last infestation was categorized by sleepless nights and anxious days spent slapping at imaginary bugs throughout class.  Awkward.  I wouldn’t wish BBs on my worst enemy.  I didn’t fully realize we had them until we were back in Kyrgyzstan and I saw one of the little devils crawling on my bag (contrary to popular belief they are not invisible).  My heart sank as I ran to flush it down the toilet.  I could feel tears welling in my eyes as I envisioned being bit every night for the next few months, and worse yet, possibly spreading BBs to other travelers and families that we stayed with.  If you haven’t had bedbugs you probably think I’m being really dramatic.  If you have, you know I’m not.

I scoured the Internet for possible solutions and came up with two: we could boil all of our stuff including our packs.  But where would we have found a jumbo sized pot?  Or we could put all of our stuff in the dryer.  And let me tell you, we looked all over Bishkek (the capital city!) and I don’t think there is a single public dryer.  So we had to resort to the next best option: wrapping our bags in saran wrap and then putting them in  black trash bags and placing them in direct sunlight.  I didn’t have much faith in this method; most people said it was ineffective and wouldn’t work unless you “lived on the surface of the sun.”  But when we came back 30 hours later and inspected every single thing we owned inside and out, all we found were three dead BBs.  So, knock on wood, I think we got lucky this time, but from now on we will definitely be inspecting our mattresses more carefully. 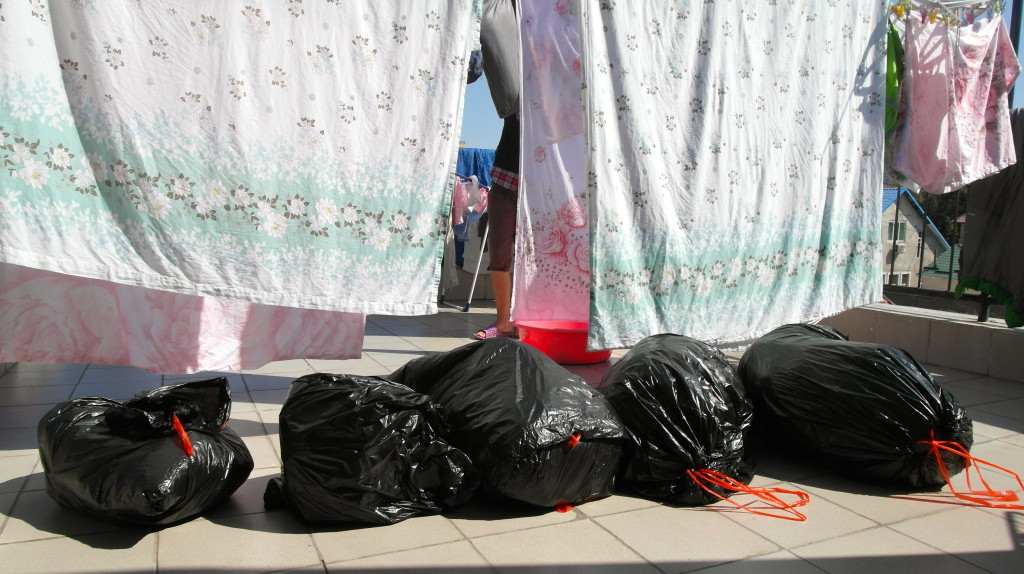 So yeah, like Danielle said, we got lucky. Except wait, didn’t she say we encountered TWO backpacker problems? Oh that’s right, there was also that little incident with the Kazakh border police.

Kazakh, and really all Central Asian, police love any chance to inspect our passports. It’s a bit of a pain, but not too bothersome as after all, it’s not like we’ve got anything to hide (except maybe that I’ve been switching between my Norwegian and U.S. passports in an attempt to save on visa fees. I think it’s okay though?). On our way back to Kyrgyzstan we were stopped at one of these checkpoints and after reviewing our passports, one of the officers asked Dennis, another American whom we had met at the Almaty bus station, to step out of the car. Poor Dennis! He was a Russian speaking expat living in Almaty, now doing a border run to renew his visa, and was probably being asked for one of those heavy bribes we had heard so much about. We felt really bad for him, especially when we saw how upset he looked when he came back to the car. But before we could start pouring our sympathies on him (What rough luck! So unfair!) he announced that, er, actually we were the ones in trouble. Apparently we were supposed to have registered our visas at immigration police within five days of getting to Kazakhstan, so now they were fining us 17,000 Tenge ($110). Each.

What?! We had no idea Kazakh visas needed registering (Wikitravel, how could you have failed us like that? … Actually we hadn’t read the Kazakhstan page carefully enough) and certainly did not have that much Kazakh cash on us. We tried to plead, negotiate, and reason with the checkpoint officer, with Dennis’ translation help as I was too scared to show any Russian knowledge, but it was no use. “I don’t want the girls to go back to America and tell their friends that they hate Kazakhstan,” the officer told Dennis, “but they have to pay.”

“I really hate Kazakhstan,” Danielle announced as we left the checkpoint office.

The officers wouldn’t accept our U.S. dollars and there were no ATMs by the checkpoint or the border so, eager to be rid of us, the guards hurried us into a random car headed back to Almaty. Ugh such a pain, what happened to being able to bribe everyone in Central Asia? At least the driver of the car took pity on us and didn’t charge us for the three hour ride back to our Couchsurfing host’s apartment (see, Kazakhs really are the nicest!).

That evening we called various traveler friends and tour agencies to figure out our options, and everyone had the same response: it was strange that the checkpoint officers wouldn’t accept a bribe, and stranger still that they wouldn’t take U.S. dollars. Hearing others’ experiences negotiating with the guards, we came up with a plan: we would take a crowded marshrutka (public minivan) to the border and I would don a headscarf so that no one would notice that we were foreigners (obviously) and any officers who peered in to check passports would merely glance over us. Then at the border I would use my newly acquired Russian bribing vocabulary to negotiate a deal. This was going to work!

A police officer came into our marshrutka to check our passports before we even had left the Almaty bus station. But as we held our breath in trepidation, the officer simply flipped through our passports and smiled. A few tense hours later of me stress eating next to Sasha and Danielle obsessively checking her split ends we stopped at the same checkpoint from the day before, and an officer “woke us up” to demand to see our passports. But, probably because he was so confused to see a Kazakh woman with a U.S. passport (I mean surely the headscarf was a successful disguise), this officer also didn’t seem to notice the missing registration stamps on our immigration papers. And when we got to the border? We simply used our charms to distract the immigration officer from looking too closely at our papers.

“Say something interesting,” I told Danielle, who was ahead of me in line.

“Have you ever been to America?” she asked. Nice one. Danielle and I both got through without a problem. If you’re reading this, CIA, you can email our recruitment letters to theroamingcoconuts@gmail.com. But you can omit Sasha’s letter, because she did get stopped. Maybe the officer didn’t want to admit to already having let two other people through without properly examining their papers though, because after consulting with some of his colleagues he waved Sasha through as well. We all made it!

That night we set aside our usual bread and cheese to celebrate with a restaurant meal. And a bedbug search party…

6 thoughts on “Bedbugs and Border Police in Kazakhstan”